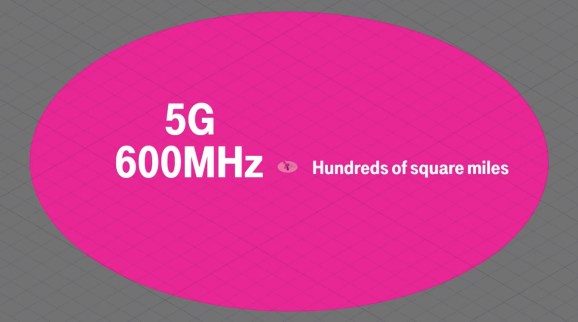 Hardly a week has passed in recent months without another 5G “world’s first” story — or outright fake news — so it would be easy to dismiss T-Mobile’s latest announcement as more of the same, but it’s actually significant. Working with Nokia, T-Mobile has completed the world’s first 5G data transmission over “low-band” 600MHz radio spectrum, a test that sets the stage for a broad and potentially fast rollout of 5G services across the United States.

While most carriers and chipmakers have focused on developing 5G radios with high-band (28GHz) millimeter wave and/or mid-band (3.5GHz to 6GHz) hardware, T-Mobile has spent the past year insisting that those radio frequencies aren’t adequate to spread 5G from coast-to-coast: Millimeter wave “small cell” towers may send wireless signals only one mile away, the reason that rival carriers are building so many new towers to support 5G.

T-Mobile’s solution is to use low-band spectrum, where a single tower can achieve “hundreds of square miles” of reach, to bring 5G signals to customers. The carrier says that its “nationwide low-band spectrum will provide broad 5G coverage for everyone nearly everywhere” in 2020, as contrasted with competitors that will offer service in “small clusters in parts of select cities.”

Nokia and T-Mobile say that they successfully completed 600MHz testing using standards-compliant 5G in Spokane, Washington and expect that the service will provide superior 5G building penetration, access to rural areas, and support for internet of things devices. The carrier has already installed 600MHz hardware in 37 states and Puerto Rico, covering over 1,500 cities and towns, where it’s debuting as “Extended Range LTE.”

What’s missing from the company’s announcement is any suggestion of the 600MHz spectrum’s 5G speed. There’s likely a good reason for that: It’s not expected to be anywhere near as fast as mid-band or millimeter wave 5G, as signaling will take place over much longer distances and will likely be subject to LTE-like latency. Since 5G’s key advantages are greater speed and radically reduced latency relative to 4G, it’s unclear whether T-Mobile 5G customers will wind up getting a 5G experience comparable to AT&T and Verizon users.

As of today, T-Mobile smartphone users are seeing between 100Mbps and 150Mbps peak download speeds in some areas, contrasting with national averages in the 20Mbps range. Verizon’s initial home 5G modems are guaranteeing 300Mbps “typical” speeds with up to 1Gbps peak performance.

T-Mobile plans to use a multi-pronged approach to offering 5G, using 600MHz as a blanket; Sprint-provided 2.5GHz towers for broader high-speed service, including home broadband; and some millimeter wave towers for high-capacity service in urban areas — assuming that its proposed merger with Sprint goes through. So far, the company has signaled that it expects its 5G service to be slower than competitors, but available to a wider number of areas. At the moment, it’s not clear which smartphones will include support for any or all of T-Mobile’s 5G protocols, but announcements should be forthcoming in 2019.