KeepSolid, maker of the popular VPN app VPN Unlimited, has quietly rolled out a new freemium VPN app that makes it possible to use the service without registering.

VPN Lite, as the new app is called, is available on Android and iOS only, which is the first obvious differentiator between it and its multi-platform VPN Unlimited big brother. However, digging down reveals a few other facets of this product that separate it from its brethren.

First up, the VPN Unlimited app doesn’t offer a free incarnation — prices start at $10 per month and go all the way up to $200 for lifetime access. And you must first sign up for an account. VPN Lite, on the other hand, offers a free basic plan that lets you access its VPN service without ads — and without registering.

However, the free plan does come with at least one major restriction: You can only access a single U.S. server.

Based on our brief tests, VPN Lite appears to be more of a vehicle for KeepSolid to promote its paid service. During sign-up, the app adopts a dark pattern design layout to tempt users to sign up to a Turbo subscription that costs $5 per month, or $30 per year. By default, it highlights the “start free trial” option, which will give you one week on the premium plan for free before it automatically starts billing you.

The “free only” option is tucked away at the bottom, almost as an afterthought. 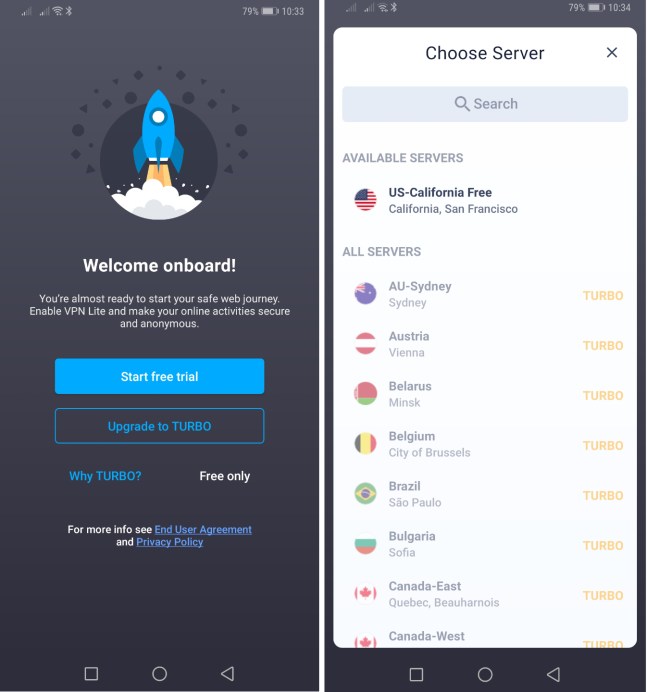 Above: VPN Lite for Android

Upgrading to Turbo will get you access to some 400 VPN servers across more than 70 locations globally, in addition to access to a choice of VPN protocols. This includes the KeepSolid Wise protocol, which is basically extra security for those wanting to hide the fact that they are using a VPN.

But if all you’re looking for is to mask your real location and IP address, the free tier could be a good option for getting online on the fly. You will just be limited to a single California server. 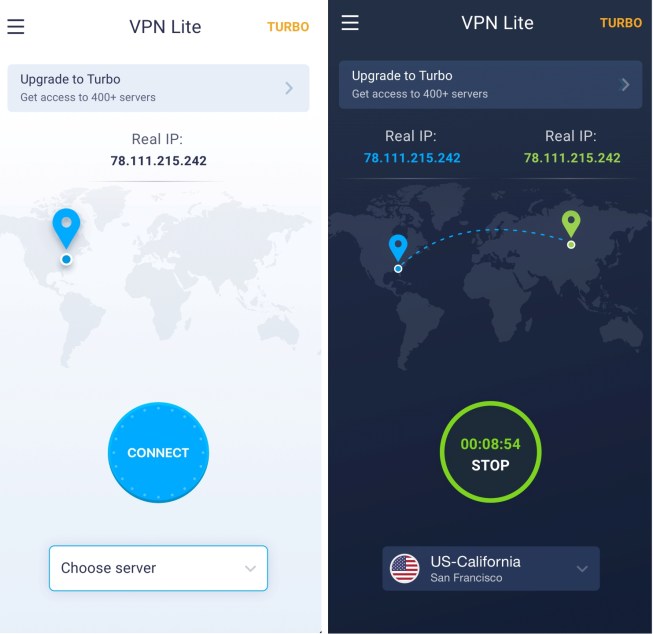 Above: VPN Lite for Android

The main VPN Unlimited app will be a better option if you regularly use VPNs across laptops and mobile devices. But VPN Lite could find some fans among those looking to dip their toe into the VPN waters and quickly hide their IP address on their mobile phone or tablet. Just make sure you hit the “free only” option when first opening the app.

There are other decent free options out there, such as ProtonMail’s ProtonVPN, which finally landed on iOS last week 10 months after coming to Android. ProtonVPN’s free tier is also advertisement-free, and it serves up access to servers in three countries (the U.S., Japan, and the Netherlands). On the flip side, you have to log in to use the ProtonVPN app, and you are limited to using it on just one device. With VPN Lite, you can download the app to as many mobile devices as you like.