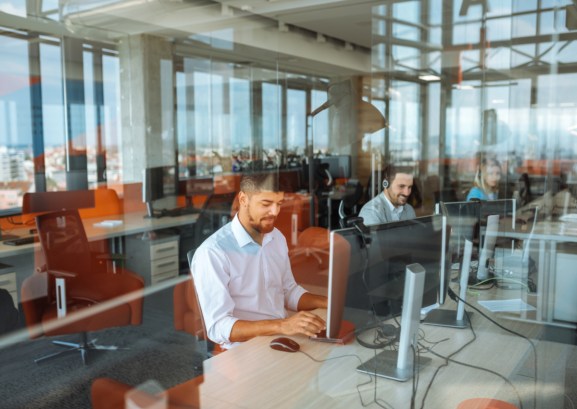 AI-powered automation can replace human employees, and it’s a win-win for everyone: You shrink the workforce and increase profit margins, while leveraging the gig economy which creates a more flexible workforce. For a look at the long-term implications, how to invest in the brave new world of work, and more, don’t miss this VB Live event!

“Uber has the most active self-driving car initiative outside of Google, but they’ve been telling all their drivers that there will be no impact to them,” says Abinash Tripathy, co-founder of Helpshift. “These drivers will be out of jobs very shortly. It behooves us to be honest with our workforce and educate them to the opportunity of large-scale automation.”

For both companies and employees, it’s about whether you’re going to bury your head in the sand, or be an onramp to change, Tripathy says. And whenever a large-scale automation event has occurred and human jobs have been impacted, human beings have had to evolve and adapt.

“Large-scale automation benefits the top line and bottom line of companies,” Tripathy says. “You can’t stop it. It’s just going to happen. But companies need to provide avenues to the impacted employees for upscaling and retraining.”

The biggest impact that bots and AI will have in the contact centers will be on the outsourced operations first.

“If you really look at the work in a contact center that’s outsourced, it’s generally very low-value work,” he explains. “It’s something that lends itself easily to automation. And companies will start shedding their outsourced agents.”

Once that starts to happen, companies will have to hire more highly skilled humans, the “tier two” customer service agents or escalation specialists who understand complex problems and can solve problems.

In call centers, the impact of automation, in the form of bots, artificial intelligence, and automation has been massive, Tripathy says.

“The more bots [companies] build for more use cases, the more benefit they get from an ROI standpoint,” he says. “Things are automated. Users aren’t waiting. CSAT [customer satisfaction] is high. They don’t have to throw a whole bunch of humans at the customer service problem.”

He points to a client that conducts a little over 2.5 million messaging conversations every month, and employs about 2,100 agents. In August, they introduced a customer service bot, and now 70 percent of conversations are handled by bots or have a bot-based component. They started the year with 2,500 agents, and plan to let go of 300 more agents before the end of the year.

“The numbers that we’re seeing basically indicate to us that by some time next year, a lot of their agent workforce will not be employed with them anymore,” he says. “The reason they’re doing bots is they want improve CSAT and improve the cost model dramatically.”

In the customer service industry, over $1.4 trillion is spent every year in contact centers, paying salaries and keeping up infrastructure to provide customer service. Now all of that changes, he says. And the gig economy provides a nice model for creating a new workforce for the contact center, as well as alternative paths to employment.

“Internet connectivity is making it so that people who are doing desk work can actually work from home in a much more flexible model,” Tripathy says. “And so when contact center operations were voice-centric, people had to drive to a building that was wired up for thousands of phones and staff those phones. Now, think of that work force becoming completely untethered. Those models have huge implications on cost.”

For an in-depth look at how AI and bots are transforming industries now, what the future holds for companies that tap into automation, and why it’s time to start calculating the potential ROI of harnessing automation right now, don’t miss this VB Live event!

More speakers to be announced soon.