Dozens of analysts have published research and speculation on the growth of next-generation 5G cellular networks, but few have front row seats equivalent to Ericsson — one of the industry’s leading providers of 5G infrastructure hardware. For that reason, several conclusions in a just-published Ericsson Mobility report stand out, including this one: 5G is going to have the fastest rollout of any cellular generation in history, ultimately going mass market in 2020 thanks to chipset improvements.

While Ericsson is careful to underscore that “this is just the beginning of a major technology shift, with many challenges ahead,” it notes that anticipation for 5G is “much greater” than what was seen ahead of the launch of 4G/LTE a decade ago. Consumers are interested, device makers are teasing early 5G smartphone designs, and cellular chipmakers are aggressively developing 5G products. Thanks to both demand and supply, Ericsson believes that 5G will be available to 40 percent of the world’s population by the end of 2024 — history’s quickest global cellular build-out, beating even LTE.

Fixed 5G hardware is already available, and portable solutions are coming soon. At this stage, Ericsson predicts that there will be at least 10 smartphones with 5G by the end of 2019, with most launching around April, and others following in June or July. They’ll be trailed by a handful of 5G-capable PCs and industrial solutions.

Ericsson expects the global 5G market to be dominated by “mid-band” devices using radio frequencies under 6GHz, rather than high-band millimeter wave (mmWave) devices, which will constitute a solid minority of options — primarily in North America. The company also expects that there will only be one or two low-band 5G devices by the end of 2019, such as smartphones developed specifically for T-Mobile’s 600MHz spectrum.

Increased availability of 5G devices will depend on the release of second-generation 5G chipsets, Ericsson says. These chipsets, expected in 2019, will enable devices to achieve reasonable power consumption and performance in smartphones, laptops, and industrial devices.

As has been established by plenty of anecdotal evidence, mmWave will struggle initially due to several factors: Limiting standard power consumption, “additional maximum power reduction,” and antenna design all require additional engineering that’s still underway. But Ericsson expects that in 2020, third-generation 5G chipsets will have been introduced and a large number of 5G devices will be available for purchase. That’s the point at which 5G will really enter the mass market.

By 2024, the report suggests that 5G will be thoroughly established worldwide. In North America, 55 percent of all mobile subscriptions will be 5G, followed by 43 percent in Northeast Asia — led by South Korea, Japan, and China. Europe will lag behind with 30 percent uptake in the western part of the continent, but surpass the roughly 10 percent 5G subscription rates for central and eastern Europe. Latin America and the Southeast Asia/Oceania regions will depend on 5G deployments that haven’t been firmed up yet, though subscriptions are expected to start in 2020 and 2021, respectively. 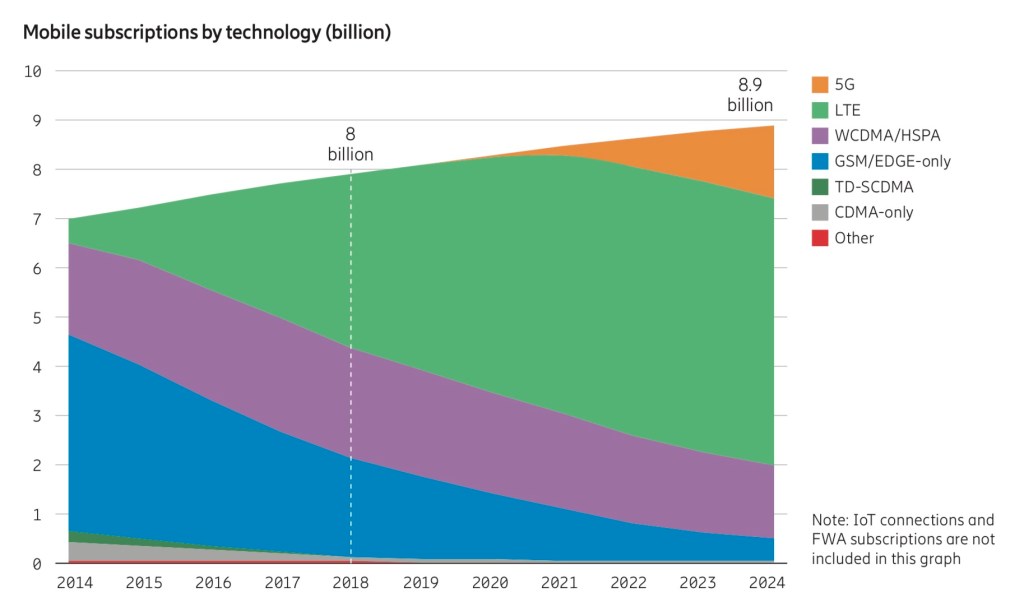 The raw numbers don’t reflect significant regional differences, as 4G will continue to grow in the developing world as 5G advances in developed countries. Moreover, 5G is expected to become popular because of its decreased cost per byte of data amid growing demands for more data. Ericsson expects that the average smartphone in 2024 will be using over 21GB of data per month, up around four times 2018 levels, with increased video use generating a strong majority of the traffic. Increasing use of VR, 4K, 8K, and AR content will drive much of the added demand.