The Semiconductor Industry Association honored former Stanford University president and chip designer John Hennessy, who founded MIPS Computer Systems in 1984 and cowrote the book on how to design microprocessors.

Hennessy received the Robert N. Noyce Award, named after the founder of Intel and the highest honor the chip industry trade group gives to its leaders. In no small part due to engineers like Hennessy, the semiconductor industry has grown to $450 billion in annual revenues, with growth targeted at $500 billion by 2020, according to the SIA.

“Every 10 years, John has done something pioneering,” said Jensen Huang, CEO of Nvidia and a former student of Hennessy’s at Stanford. He spoke onstage with Hennessy in front of a few hundred people at the SIA’s dinner in downtown San Jose on Thursday night.

Hennessy taught chip engineering at Stanford University, starting in 1977. He became Stanford’s 10th president in 2000, remaining in that position until 2016. In the 1980s, with UC Berkeley’s David Patterson, he pioneered the RISC computer processor architecture. That tech was used by MIPS and became the chief rival to Intel’s x86 architecture. And while Hennessy’s company didn’t win the processor wars, you could say his architecture eventually won, as it is the foundation for ARM’s architecture, which beat Intel in creating processors for smartphones and power-efficient devices.

Hennessy is remembered by engineers as co-author of two seminal books on microprocessor design, Computer Organization and Design: the Hardware/Software Interface and Computer Architecture: A Quantitative Approach.

Ideas from the books on instruction-level parallelism and multi-stage pipelines became a trend and are still used in modern computers. 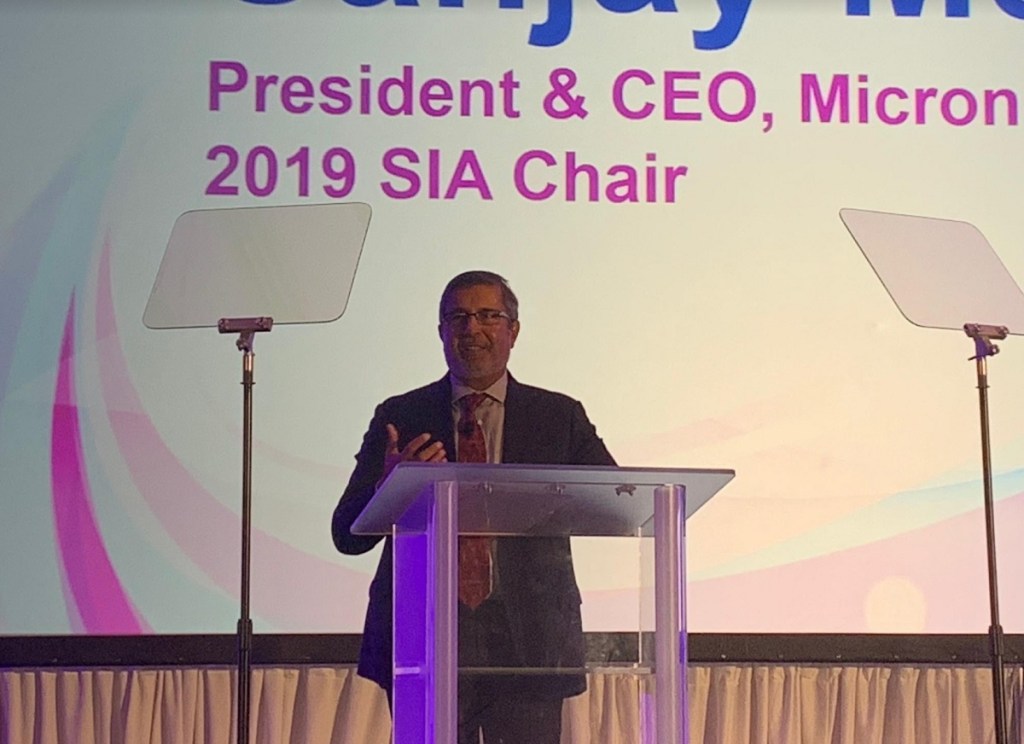 Above: Sanjay Mehrotra, CEO of Micron, announces John Hennessy as winner of the Robert N. Noyce Award for 2018.

In his acceptance speech, Hennessy marveled at technology’s progress, most of all the lifespan of Moore’s Law, the prediction made in the 1960s by Intel chairman emeritus Gordon Moore that the number of transistors on a chip would double every couple of years.

“When Gordon Moore made that observation, he didn’t call it a law,” Hennessy said. “It was an ambition. It has lasted more than 50 years, and it has been truly amazing.”

As Moore himself observed, “all exponentials come to an end,” Hennessy said. Then we will all be challenged to think differently. But he said this is a moment to be appreciated for its past results. If the auto industry had made similar advances as semiconductors, we would drive from San Francisco to New York in a few minutes and then pack the car away in a briefcase.

“I still remember seeing my first layout of a microprocessor,” Hennessy said, noting it was a Zilog processor in 1980. Since then, the advances enabled by the chip industry include smartphones, servers, the internet of things, personal computers, and even Apple watches.

He noted that Silicon Valley has reached success thanks to brains imported from all over the world. Every major IPO company had a founder who was an immigrant, he said.

As for what will succeed Moore’s Law, Hennessy offered a challenge: “All you software guys out there: The hardware industry has been carrying you on its back for the last 40 years. Now it’s up to you.”

He said we’ll have to move to heterogeneous systems that do a variety of processing jobs at the same time using a variety of different types of cores.

Hennessy has marveled at advances such as Google’s Alpha Go beating the best human Go board game player, and he described humans as learning machines from the earliest age.

“Watching a young person, a baby, learn to smile — it was one of the most amazing things,” he said.”It’s a learning machine. That’s what’s happening with machine learning.”

But he warned that we don’t yet have a good understanding of how the brain works. 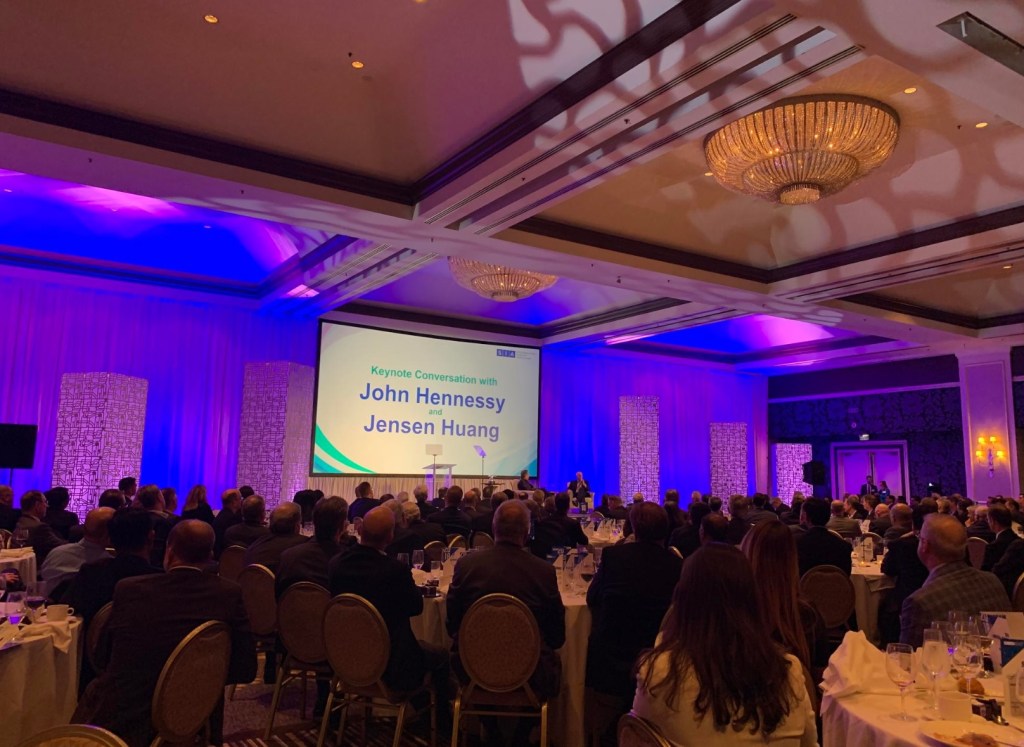 Hennessy said he hopes technologists work on problems that can improve human life, like self-driving cars that can reduce the number of deaths on the road or medical diagnostic tools that can minimize mistakes. He said even using AI to make sure medical professionals wash their hands before seeing patients could save a lot of lives.

“What’s amazing about people is their ability to generalize,” Hennessy said. “Human adaptability. How you build that in with safeguards. That requires a level of sophistication we are not close to yet. But it’s a noble problem to work on.”

Hennessy has started a new scholarship program to create the next generation of leaders in the industry. He said he’s frustrated by the current quality of leadership (prompting laughs in the audience) and that he’s been a lifelong educator. So he and Phil Knight, founder of Nike, started a program to train 50 graduate students in leadership skills. They get to sit down with leaders like Susan Wojcicki, founder of YouTube, and Condoleezza Rice, former U.S. Secretary of State.

“We’re investing in what (these students) will do 20 years from now,” he said.

On a personal note, Hennessy said he gets up early in the morning, exercise, and writes and that loves what he does. He’s also a voracious reader.

“John is so deep in everything, in the sciences and everything, it’s irritating,” Huang said. “You have impacted the lives of so many people.”

Hennessy replied, “I came to the right place at the right time.”