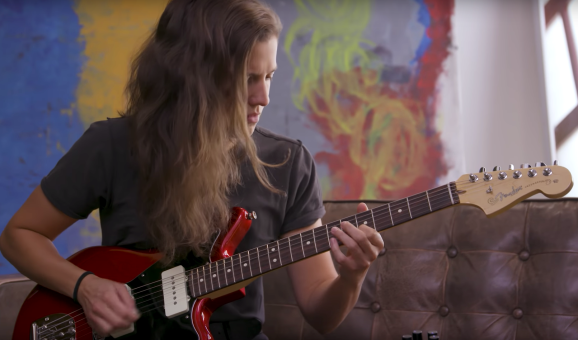 First-gen marketing methods, including outdoor, TV, direct mail, and more, are still essential parts of your marketing campaign, but traditional doesn’t mean old-school and analog anymore. Learn how to integrate offline and online efforts channels, how martech brings traditional methods into the 21st century, and more in this VB Live event!

Coming up on Fender’s 75th anniversary, the company has gone from the time when Leo Fender introduced the first amplifiers to his musician friends to a company operating in 75 countries, and making guitars used by 80 to 90 percent of artists across all stages and festivals globally, says Evan Jones, CMO of Fender. But when Jones joined Fender three and a half years ago, the company was just getting started integrating its online and offline marketing efforts.

“We have a tremendous relationship with artists, but as much as we have a ton of institutional knowledge, we didn’t have a ton of data,” Jones says. “Early on we commissioned some of the first consumer segmentation work the company had ever done to understand the consumer a bit better.”

They discovered that 50 percent of all new guitars in the last five years at that time had been purchased by women, which, he says, “was a complete shocker to a lot of people in the building,” but spoke to the increasing diversity of their audience, and the opportunity that could come along.

They also learned that about 45 to 50 percent of all the new guitars they sell each year are sold to first-time players, but that 90 percent of the new players would also quit within the first year — so they realized early on that they didn’t have so much of an awareness issue as an abandonment issue.

Looking at what they could do to address that, they had also simultaneously conducted a study to understand how people learn. And the statistics showed that the lessons market was actually about four times the size of the new guitar market globally, and the fastest growing segment of that market was online learning.

“About three years ago, we took all those stats and we established a Fender Digital organization,” he says. “Over the last three years we’ve really focused on doing a couple of things to help shift the company and evolve our growth.”

One is that they’ve shifted nearly all of their marketing from being more trade-based, print-heavy, and transactional to being much more brand-led, digital, and consumer-focused. Second, they built a digital product and engineering team at their headquarters in Hollywood that really owns Fender.com, but has also used the data they uncovered to introduce some new products.

That includes Fender Tune, which is a digital tuning app that’s been downloaded more than three million times in the last two years, Jones says, and Fender Play, an online learning app designed to help new beginners not only learn to play guitar, but also stick with it. Jones calls Play their most important investment now, and the number one growth initiative from the company.

“I think what all of that has done is provided us with a really strong foundation for all of our digital efforts,” Jones says. “As we’ve invested in building our social channels, invested in launching ecom, invested in creating digital assets that we provide to consumers and retailers, we’re also now building a digital product business to stand alongside our physical product business.”

Challenge number one has been going from trade-based to consumer-focused, he says.

“To drive that, we really focused on storytelling, artist marketing, social media, retail, and PR,” says Jones. “As we make this next step from transactionally-based to journey-based marketing, we realize that different segments of consumers want different experiences.”

“We recognized that coming into retail for the first time can be a very daunting and intimidating experience for consumers, especially as we learn about how many women have been coming into the ranks of guitar,” Jones says. “With Fender Academy, we wanted to elevate the overall storytelling of sales associates globally.”

It’s an online learning tool specifically designed for sales associates; currently more than 5,000 associates globally across all of their retail locations are now using it. It’s populated every month with new modules, and Fender incentivizes engagement by offering rewards to sales associates, from flyaway packages to a chance to win Fender gear, and gamified it all by allowing associates to see how they rank against other users.

“What we’re finding is that the retailers who have associates using Fender Academy are reporting better sales and better consumer experiences because they’re more educated about every single product we launch,” he explains. “That’s creating a lot of energy on the shop floor, so that when the products come out, not only are the retailers excited for the commercial opportunity, but sales associates are excited to be able to educate customers who come in their stores.”

From a marketing perspective, it’s created a new team within the marketing organization that didn’t exist three years ago, he says, the CRM and acquisition team, which at the end of the day, is going to be responsible for user acquisition, customer acquisition, as well as retention and life-cycle marketing.

“We believe the long-term potential from a business perspective is to generate outsized LTVs for the brand, but we think at a consumer level, there’s tremendous value we can add to everyone’s musical journey if we better understand their needs, how they’re using the products, and what their aspirations are,” Jones adds. “We can start serving them with customized gear that can inspire them and help them progress further in their journey.”

The company has also found a lot of success in connecting digital efforts and experiential marketing, Jones says. They’re looking at both Fender-branded experiences and pop-up events that can complement product launches, or other events that can bring different segments together based on their aspirations. For example, bringing players together who aspire to be performers to learn from each other and from artists and producers Fender has access to. They’re also looking at key moments in the year, whether it’s music festivals or music events, where they can create distinct brand experiences.

“And, quite frankly, we want to continue our commitment to helping amplify the voice of the artist, and also give consumers inspiration to keep playing,” he adds. “I’d say we’re on the front end of the next phase of our marketing development.”

He points to an event they hosted at the beginning of this year in New York, to celebrate the launch of their California Series acoustic guitar line. For the first time ever they reached out on their social channels to invite anyone in the area to the event in New York to hear a live performance and get to be the first to try out the guitars.

“We had people driving in from as far as Ohio for an event in New York City,” he says. “What was really exciting to me is that I’d say 60 to 70 percent of the audience there were women. It was clear that this wasn’t their first time picking up a guitar. They were testing out the guitars, trying them in different amps, plugging them into different pedals, talking about different ways to use them. That was a really positive indicator for us that the brand is alive and well and reaching a whole new audience. As we look into 2019, we believe we have the opportunity to build on that.”

To learn more about how to merge digital and real-world brand experiences, create customer engagement on every channel, and develop a brand story that lives both online and off, don’t miss this VB Live event!