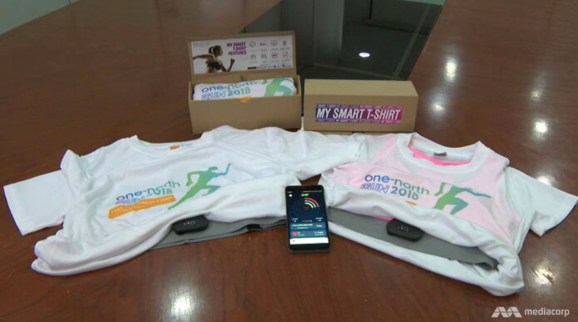 Though the wearable revolution has largely focused on placing health sensors in wristbands, Singapore’s government is backing a project to produce heart-tracking shirts — notably at more aggressive prices than existing alternatives. Assisted by Singapore’s Ministry of Trade and Industry, startup KaHa and textile producer Tex Lane trialed a “smart T-shirt” prototype with around 100 runners this weekend, Channel News Asia reports, and plan to sell a finalized version in mid-2019.

KaHa’s shirt is promising an affordable way to measure electrocardiograms (ECGs), heart rate, and calories burned during exercise, features that otherwise would require a smartwatch such as the $399 Apple Watch Series 4. The price for KaHa’s solution will supposedly be only 20 to 30 percent more than a standard athletic T-shirt, which could place it in the sub-$150 range.

A key challenge for KaHa and Tex Lane is developing a solution that’s both washable and accurate. In order to make sure the shirt’s heart-monitoring electrodes continuously make contact with your body, the companies developed a two-layer shirt that is internally tight on your skin, while looking like a runner’s t-shirt from the outside. Used for other populations, alternate versions could take the form of corporate uniforms, or regular shirts for senior citizens and children.

The prototype shirt uses a breathable fabric to reduce the wearer’s temperature during exercise, and it has a gray stripe at the bottom where a small plastic housing connects to the electrodes. This housing uses Bluetooth to sync collected data to a user’s phone, which can display ECG data and the resting heart rate interval, flagging abnormalities if they’re detected.

Channel News Asia found that the prototype’s electrodes began to peel off after one wash, but the final version is expected to survive 100 washes — a differentiator from earlier health-monitoring shirts. Prototype testers described the tight inner layer as needing design improvement but praised the ECG’s accuracy for reflecting heart rate variance.

It remains to be seen whether the KaHa design will actually take off in the marketplace, but if the company can deliver on its promised pricing, it has a shot. KaHa’s shirt frees you from needing to wear a wristband, but it may modestly constrict your upper torso in the process and force you to carry a smartphone for monitoring. By comparison, the Apple Watch Series 4 can provide similar ECG monitoring from your wrist, and its cellular model can even go phone-free, but at higher price points. It also requires country-by-country regulatory approval, but KaHa’s system likely will, too.

Users interested in trying a similar system today can look to Hexoskin, which has been selling a larger and fairly expensive alternative for iOS and Android users for years. Shirts including the company’s heart, respiration, and sleep tracking hardware range from $399 to $499.