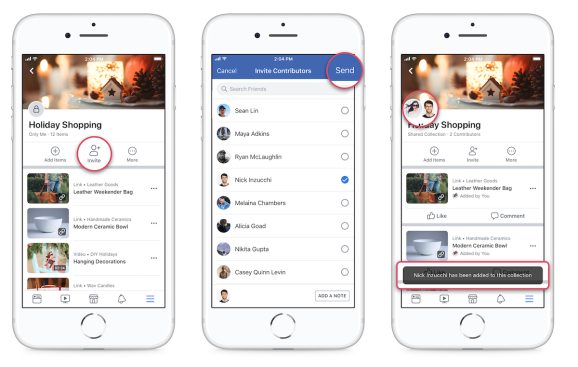 With collections, users can save and organize posts and links they come across in News Feed. Now that it’s sharable, you can send your grandma a suggestion of gift ideas for your birthday or invite friends to collaborate on a list of things to do on your upcoming vacation. Facebook said the feature will be rolling out to all users this week.

This product update makes Facebook’s collections similar to Pinterest’s group boards, which have been around for a couple of years. Instagram users can also create collections of saved posts, but those posts are still private for now. Facebook first started testing collections in the spring, but it hasn’t given many specifics on engagement beyond saying that “millions” of people use the collection feature every day.

Given that the “Turkey 5” weekend has already come and gone, the tie-in to the holidays seems like an afterthought on Facebook’s part. But will people actually use this feature to create shopping lists? Ecommerce analysts are skeptical.

“The issue is Facebook is not a shopping destination for anyone — there is Marketplace, but it’s basically a souped-up version of Craigslist,” Forrester ecommerce analyst Sucharita Kodali told VentureBeat. “I think people are challenged to find one thing they like on Facebook, much less a whole slew of things they would aggregate into a collection.”

“In the short term, this is just a better attribute for Facebook customer audiences. Like if a bunch of people have a suitcase in their wish list, an advertiser like Away can now say ‘I want to show an ad to people who show a suitcase in their wishlist’,” Jason Goldberg, the chief commerce strategy officer for Publicis Communications, told VentureBeat. “But in the longer run, you could imagine Facebook letting someone buy that product [directly on Facebook], and then Facebook could potentially take a commission on that sale.”