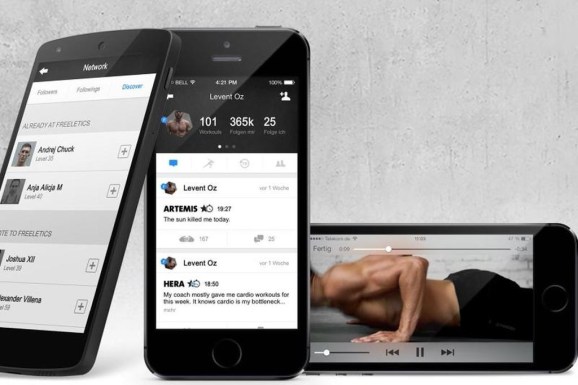 Few startups have cornered the billion-dollar fitness app market as successfully as Freeletics, a five-year-old German venture that’s produced some of Europe’s most popular personal coaching apps. The firm, which was entirely bootstrapped until August 2018, has more than 31 million users worldwide in over 160 countries. And now, with 120 employees, a suite of four apps, and a clothing line, it’s gearing up for further expansion.

Freeletics today announced that it has raised $45 million in a series A funding round led by FitLab, Causeway Media Partners, and Jazz Venture Partners, with participation from Courtside Ventures, Elysian Park Ventures, Ward Ventures, and business mogul Tony Robbins. As part of the round, Causeway’s Mark Wan and Jazz’s John Spinale will join the board, and FitLab, which bought a controlling majority of shares from Freeletics’ founders, will move to recapitalize the company.

It’s an impressive VC roster, to say the least. Elysian Park Ventures is the investment arm of the Los Angeles Dodgers, and Freeletics’ other partners have ties to the San Francisco 49ers, Boston Celtics, and Cleveland Cavaliers.

“The funding outcome reflects tremendous global confidence in a product we have always believed represents the cutting edge of self-development for today’s tech-savvy and health-conscious consumers,” he said. “Our investor portfolio has a deeply rooted understanding of the fitness industry, as well as high-growth tech companies.”

Freeletics is the brainchild of Joshua Cornelius, Mehmet Yilmaz, and Andrej Matijczak, who sought to develop an effective, software-based alternative to expensive workout equipment and gym memberships.

“We are proud of what we brought to life and excited to have found such a strong fit for Freeletics,” the three founders said in an earlier statement. “We are happy to leave the company in very capable hands and know that it will continue to succeed and grow with its outstanding team and this strong group of investors behind it. We look forward to seeing the rest of the Freeletics story unfold. We know this company is destined for amazing things.”

Freeletics Bodyweight, the company’s first app, launched in 2013 with a library of guided workouts that didn’t require a gym or equipment. (It now boasts over 1,000 five-to-thirty-minute workouts that can be filtered by duration, goals, and muscle group.) October 2015 marked Freeletics’ foray into apparel with Freeletics Wear, an in-house clothing line. And the following year, in 2016, Freeletics rounded out its app portfolio with three new offerings: Freeletics Running, Freeletics Gym, and Freeletics Nutrition.

Growth across its apps reached a record 120 percent in the past six months, the startup claims.

As impressive as that may seem, Freeletics isn’t the only activity-tracking app that’s raking in some serious dough. Aaptiv, the self-described “Netflix of fitness,” in June raised $22 million from Amazon, Disney, and others. And both it and Aaptiv compete to an extent with wellness apps like Headspace, Pause, Calm, Shine, BioBeats, and Digg cofounder Kevin Rose’s Oak, a few of which have attracted substantial funding. Calm raised $27 million at a $250 million valuation in June, for example, while Headspace brought in a $37 million round last summer.

But Freeletics contends that the sophistication of its artificially intelligent (AI) Coach feature, which learns from feedback and tweaks the intensity of fitness plans accordingly, sets it apart from most apps on the market.

“Freeletics is a phenomenal success story having achieved so much in such a short period of time,” Mike Melby, managing partner at FitLab, said. “We look forward to this partnership and are thrilled to be a part of the continued growth and progress of Freeletics in the US and internationally.”