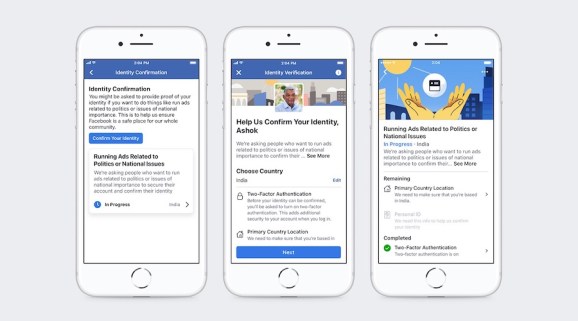 As India inches closer to its general elections, Facebook announced today that it is bringing transparency to political ads on its platform in the country early next year. This would make India the fourth market — after the U.S., Brazil, and the U.K. — where Facebook offers users a disclaimer on political ads.

Facebook began offering users in the U.S. information about the buyer of a political ad as part of a series of changes last year to fight misinformation and foreign meddling in elections. Facebook has admitted that Russian companies with Kremlin ties had purchased some highly misleading political ads to influence the 2016 Presidential election in the U.S.

At a conference in New Delhi last month, several journalists told a Facebook spokesperson that the company was seemingly not addressing the growing number of Facebook Pages that are posting and promoting false information, some of a political nature. They also requested the spokesperson to outline the company’s efforts to preemptively fight some of the unique challenges (such as content in vernacular languages) that could arise next year in the country. The spokesperson could not come up with any specific answers.

Facebook said Thursday that it will also maintain an online searchable Ad Library, as it has in other markets, which will document all the ads related to politics from a particular advertiser alongside other information such as range of impressions, demographics that saw the ad, and the budget that went behind an individual ad.

As part of the rollout, Facebook will also require users who wish to run a politics-influenced ad to confirm their identity and location. Interested advertisers can begin to identify and provide their location confirmation starting today.

Technology companies are facing mounting pressure from governments worldwide to curb spread of false information on their platforms and other issues. Google and Twitter have also made efforts on this front — though they don’t always get things right. Google said last month that it would vet political ads for European elections next year and has similar plans for India.

India, which is Facebook’s largest market, could be the biggest test yet for whether the company has learned from its recent mistakes.