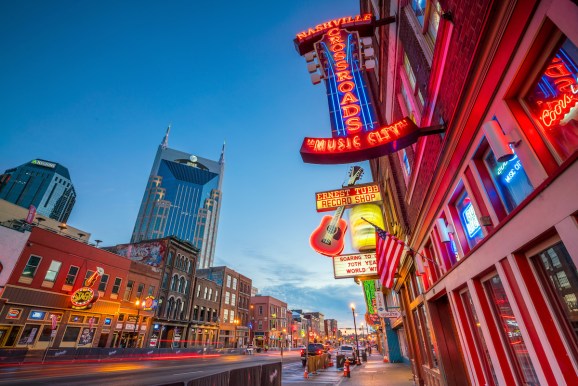 News cycles haven’t been kind to tech talent in the Heartland lately. Amazon’s choice of New York and Arlington for its new headquarters sparked plenty of think pieces diving into the quality and quantity of tech talent between the coasts.

Yet whatever issues hold their tech companies back (and access to talent is one of them), many of the Heartland’s emerging tech hubs show investor-worthy growth rates. And Amazon did pick Nashville for its Operations Center of Excellence, a more than $230 million investment expected to create 5,000 high-paying full-time jobs.

“My first visit to Nashville was last May,” said Monique Villa. She fell in love almost immediately, deciding to leave Los Angeles for the Tennessee capital. She remains an investor with Los Angeles-based Mucker Capital and has launched her own organization in Nashville, called Modern Capital.

Would Villa have felt at home in Nashville if Amazon were already there? The influence of such an enormous company could squash the cultural uniqueness of a city that size — and new data shows culture gives Heartland cities their greatest competitive advantage.

This year, Powderkeg launched the U.S. Tech Census, a research initiative aimed at understanding the challenges and opportunities within emerging tech hubs between the coasts. The project surveyed more than 1,000 entrepreneurs, investors, and tech professionals across a combined eight cities: Boulder, Chattanooga, Cincinnati, Denver, Indianapolis, Knoxville, Memphis, and Nashville. Looking at these markets, two trends stand out.

First, all show growth rates worthy of VC dollars. For instance, the 33 Cincinnati SaaS startups surveyed show a median growth rate of 100 percent in annual recurring revenue (ARR), with a mean of 110 percent.

Second, tech talent values company culture above all else. The startups achieving high growth rates recognize that and prioritize the creation of an exciting work culture. Meanwhile, culture issues continue to be liabilities for coastal tech companies.

“[Diversity and inclusion] is missing in Silicon Valley hugely,” said Courtney “Coko” Eason, founder and CEO of Nashville-based Milk the Moment. “I think that’s why these tech hubs are starting to just pop up in other places, so you can create your own culture.”

This makes innovating around culture a no-brainer, especially when recruiting and attrition costs can exceed a Midwest-sized seed round of funding. According to LinkedIn, technology has the highest turnover of any business sector, at 13.2 percent.

So is it as easy as invest in culture, and tech talent will come running? Not exactly.

How do tech companies build a magnetic work culture?

The Rust Belt’s transformation into the Robot Belt isn’t accidental. Nor is the rise of logistics software companies in Chattanooga or marketing tech startups in Indianapolis after Salesforce acquired ExactTarget. See a pattern?

The companies in these emerging tech hubs play to their strengths, leveraging not just existing industries, but also what’s culturally unique about their cities. That makes it much easier for community resources to emerge and rally around their local tech ecosystems.

A local tech culture that prioritizes work-life balance. That speaks to the work done by local organizations to show how Denver and Boulder’s frontier spirit and love of the outdoors bleeds into the tech community. The same is happening in Memphis, where many see tech entrepreneurship as a natural evolution of the city’s creative energy.

“When you think about Memphis, you think about music,” says Gebre Waddell, CEO of Memphis’ Soundways. “We’ve found some way of channeling that creative energy that’s been present in our city, that was part of the birth of [blues, soul, and rock n’ roll] into tech. You see it in the UI, in the UX.”

The start of a talent boomerang

Today’s tech professionals realize they have something they didn’t have before: options.

“We’re starting to see some executive boomerangs,” says Charlie Key, CEO of Cincinnati-based Losant. “These people are going out to the coasts, getting experience, and then coming back. There are people here that can create products and businesses that can compete anywhere in the world.”

In every market surveyed in the Tech Census, low cost of living and low business costs were major factors in attracting talent and founders. But low-cost options generally don’t win on their own.

Capital and talent: Which follows?

In Columbus, several seasoned Silicon Valley investors launched Drive Capital, noting that they saw the Midwest as “the opportunity of a lifetime.” Monique Villa felt the same way about the Southeast when she founded ModernCapital in Nashville.

“From a macro level, we’re seeing this big shift, where talent is becoming the stronger of the magnets between capital and talent,” says Villa. “Traditionally, we’ve seen talent follow capital, and now we’re seeing capital follow talent. I think for that reason, people are going to be building companies everywhere.” That’s excellent news for the Heartland. Those who do their best work near the Blue Ridge Mountains or the Great Lakes shouldn’t have to choose between New York or Silicon Valley. And investors seem to agree. The more emerging tech hubs embrace their local culture the more talent they’ll attract, and the more investors will bring their presence (not just their dollars) into the Heartland.

Matt Hunckler is CEO of Powderkeg, a connections engine for startups between the coasts.