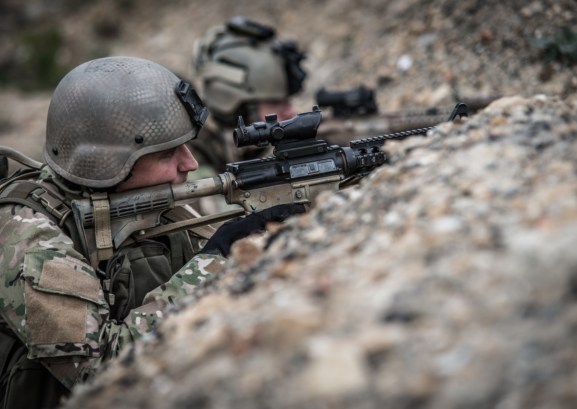 As an Army colonel in the mid-2000s, I got an insider’s view on how the U.S. military ties itself up in red tape. The Army was facing a crisis — our warfighters were being killed and maimed at an unacceptably high rate by roadside bombs. America had an answer: the Mine-Resistant Ambush Protected vehicle known as MRAP. But getting them built and sent to the battlefield was bogged down in bureaucracy.

I watched with admiration how then-Defense Secretary Robert Gates short-circuited roadblocks to get the MRAPs and other crucial equipment into soldiers’ hands. The accelerated deployment alone saved thousands of U.S. lives.

I say this to show that the military can be complicated, and a good idea alone isn’t always enough. We are at our best when we leverage all of America’s talent to collaborate in support of our Nation’s defense.

Most entrepreneurs are smart and persistent enough to find for themselves a Broad Agency Announcement, the government’s request for proposals, or the Small Business Innovation Research, which provides R&D funding for companies with fewer than 500 employees. After that, however, even the most persistent founders can find themselves in what I call the “valley of death” — that purgatory between a funded idea and a lucrative contract. To navigate your way out of the valley, you first need to understand the military’s culture and structure.

It’s important to realize that the military is not monolithic — each service has its own unique culture and priorities. A particular technology may be useful for the Army in one way but have a completely different application for the Navy or Marines. Don’t assume that unlocking interest from one branch will automatically lead to demand from the others.

One promising new route for entrepreneurs is the Army Futures Command that opened this year in Austin, Texas.

The aim of the new Command, led by a four-star general, is to put decision makers responsible for modernization of the military closer to innovators, and to streamline the acquisition process. The Army envisions it as being nimble and better able to work with entrepreneurs and innovators.

Once companies find an entry point — like the Army Futures Command — they can focus on strategy. The next steps are to find someone you can brief and to build your proposal to show exactly how it solves a military problem.

As an Army officer, I sat in on many briefings by entrepreneurs who had a great product but failed to show clearly how it would address a specific problem. Their efforts went unrewarded.

The Army’s goals aren’t a mystery. In fact, they’re available for anyone to see.

The service currently has six priorities for modernization, ranging from long-range precision fire to soldier lethality. So any startup targeting the Army needs to carefully craft its briefing to show how its technology will advance the service’s capability in one of those six areas.

When it comes to long-range precision fire, for example, a startup is unlikely to be able to provide the whole system that America needs to keep pace with Chinese and Russian advances. But it can target its proposal to a key component of the system; say, a single sensor that might improve battlefield accuracy.

It’s important to realize that the military is not prescriptive in the exact solution it wants. For entrepreneurs, there is no one critical path to success. It’s up to them to come up with and communicate solutions that can solve specific problems.

With that in mind, here are three key elements that companies need to address when presenting their potential solution to the military.

Suitability: The proposal needs to make clear how the technology meets the military’s requirements to solve a specific problem. For the Army, the best way to achieve this is to tie your idea to one of the service’s six priorities. A common mistake startups make is to pitch an array of possible uses in the hope that something sticks. That reflects a widespread assumption that the military is a honeypot with unlimited funds. On the contrary, there is a lot of rigor in the procurement process. What’s more, the defense budget may get tighter in the future as we look to balance competing priorities of the debt, fiscal shortfalls, and domestic needs.

Feasibility: Your proposal should be something that is supported by current technology and that can be accomplished in the next one to two years. Too often, startups bring ideas that have great promise but that can’t solve an immediate military problem because the existing technology does not support it. For example, despite recent advances in technology, we are a long way from being able to build an Ironman-style robot that can fly around the battlefield. Not that the Army doesn’t want one, eventually. It’s just that it’s not going to be here anytime soon . Better to focus your proposal on technology that does exist, such as the exoskeletons that are being developed to improve soldiers’ load-carrying capacity and marching pace.

Cost: This is another area where entrepreneurs’ notion of the military as a bottomless source of funding can count against them. Many startups go into their briefings expecting to get 100 percent funding from the military. In reality, companies hardly ever get fully funded and will have to put up a substantial amount of their own funds. The best strategy is not to mention costs at all up front and to make every effort to get buy-in by demonstrating the technology and allowing the military to experiment with it. Once you win that buy-in, you should have more leverage on funding.

There’s no doubt the military is an often confounding tangle of bureaucracy. The mistake would be in assuming that red tape means there’s no way of knowing what the military actually wants, or no way to know how to sell it to them.

Lieutenant-General Stephen Lanza served in the U.S. Army from 1980 through 2017. He commanded Soldiers from platoon to theater level, including supporting missions in Iraq and Afghanistan.