Firefox 64 for the desktop is available for download now on Firefox.com, and all existing users should be able to upgrade to it automatically. As always, the Android version is trickling out slowly on Google Play.

Firefox 64 for desktop brings a Contextual Feature Recommender (CFR), available only to U.S. users for now. Mozilla describes CFR as a “system that proactively recommends Firefox features and add-ons based on how you use the web.”

If you open multiple tabs and repeatedly use them, for example, Firefox may offer a feature called Pinned Tabs and explain how it works. Firefox 64 can also recommend extensions, starting with these three: Facebook Container, Enhancer for YouTube, and To Google Translate.

Given the potential privacy implications, Mozilla is making a point of emphasizing that these CFR suggestions will not appear in Private Browsing mode. Mozilla also says it does not receive a copy of your Firefox browser history — the entire recommendation process happens locally.

Next, Firefox 64 introduces a way to organize multiple related tabs. You can now shift or ctrl-click multiple tabs from the tab bar and group them as you see fit. You can then mute, move, or bookmark grouped tabs. Firefox has plenty of third-party add-ons that let you organize tabs. Now the browser is getting some of the functionality built right in (although, Firefox did once have tab groups). 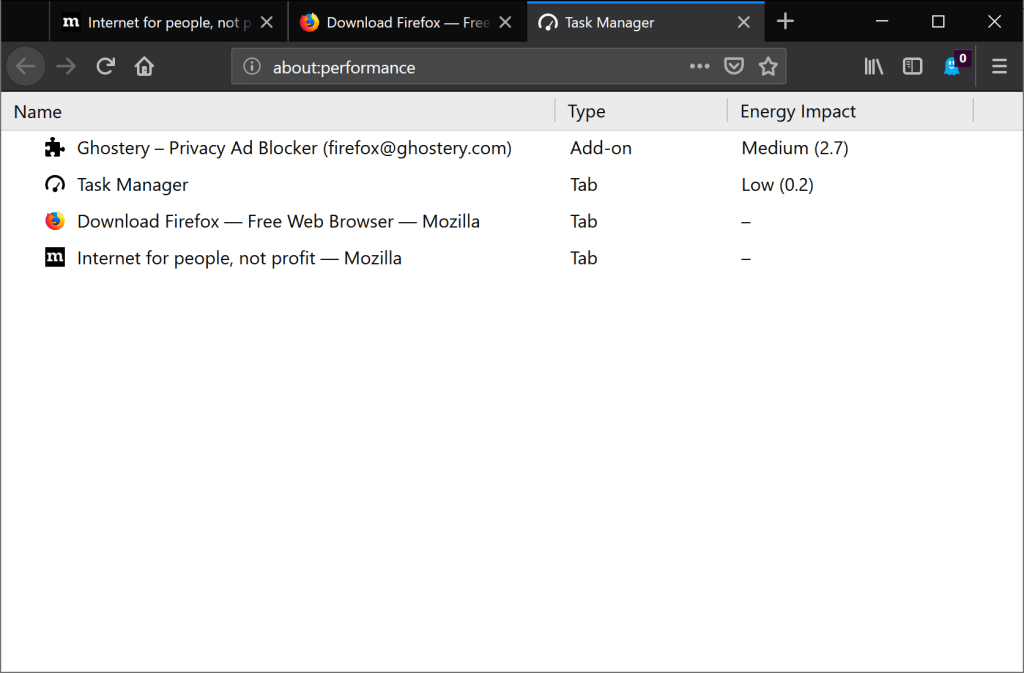 Lastly, Firefox’s new Task Manager page (just navigate to about:performance or find it under “Other” in the main menu) now shows how much energy each tab is using. Mozilla is still building out this feature and will be adding more functionality in Firefox 65.

If you’re a web developer, more details are available for you here: Firefox 64 for developers.

Unfortunately, there are no major new features in this Firefox for Android release. Instead, expect bug fixes and a single improvement: You may notice a better scrolling experience.