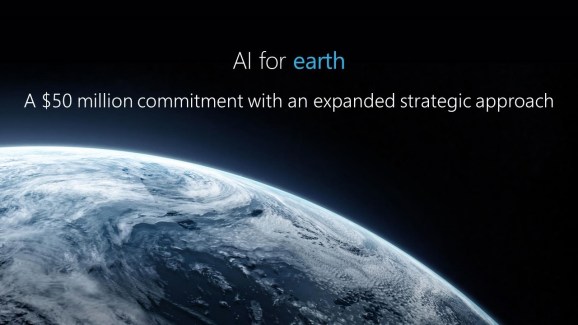 Microsoft’s AI for Earth program, which kicked off in June 2017, has provided cloud-based tools and AI services to dozens of organizations “working to protect our planet,” in the words of Microsoft president and chief legal officer Brad Smith. It’s committed to investing $50 million over the next four years to fund AI development across five key areas — agriculture, biodiversity, conservation, climate change, and water. Today, at an event at the National Geographic headquarters in Washington, D.C., Microsoft and National Geographic jointly revealed 11 winners of the AI for Earth Innovation Grant.

The recipients hail from six countries and eight regions across five continents and were selected from a pool of more than 200 applicants. They’ll be awarded between $45,000 and $200,000 from a prize pool of $1.28 million — larger than the initially planned $1 million — to support the creation and deployment of open source models and algorithms. Additionally, they’ll be granted free access to machine learning tools on Microsoft’s Azure platform and affiliation with National Geographic Labs, National Geographics’ initiative to “accelerate … solutions” to the world’s biggest challenges with data, technology, and innovation.

“We’re well aware of the power of taking machine learning-based approaches to solving problems,” Lucas Joppa, chief environmental officer at Microsoft, told VentureBeat in a phone interview. “We’re also aware that creating machine learning-based solutions is somewhat arduous. [When we started the AI for Earth program], we thought really hard about what [Microsoft is] good at and how we could partner with organizations to accelerate broader programmatic goals.”

As for National Geographic, which recently celebrated its 130-year anniversary of grant-making, the AI for Earth Innovation Grant program advances its mission to invest in “bold people and transformative ideas” in the fields of “exploration, scientific research, storytelling, and education,” explained Jonathan Baillie, executive vice president and chief scientist of the National Geographic Society.

“The National Geographic Society is committed to achieving a planet in balance, and in joining forces with Microsoft on the AI for Earth Innovation Grant program we are providing incredible potential to drive fundamental change through our unique combination of expertise in conservation, computer science, capacity building, and public engagement,” he said. “We look forward to seeing these talented individuals create solutions to some of the most challenging environmental issues of the 21st century using the most advanced technologies available today.”

Not counting today’s grantees, Microsoft’s AI for Earth program has awarded grants to 202 projects in 57 countries. In addition to grants, it provides “advanced training” to universities and NGOs leveraging AI in their projects and “substantial investments” to the most promising startups.

“When you think about all of life on Earth, there’s an estimated 10 million species or more, and we’ve only discovered 1.5 or 2 million of them,” Joppa said. “There’s so little we know about the natural world, [and] the technology sector has the potential to accelerate the next phase of Earth exploration … I wake up incredibly enthusiastic about how much there is left to be discovered.”

AI for Earth grants, specifically for data-labeling services and Azure compute — the latter of which will be awarded in the amounts of $5,000, $10,000, or $15,000, depending on the scope of the project — remain available to interested teams and parties. The next deadline for proposals is January 7, 2019.

AI for Earth is Microsoft’s first major “AI for good” initiative. Its second — AI for Accessibility — was announced in May and will award $25 million over the next five years to developers, NGOs, and others making AI-fueled solutions that serve those with disabilities. The Seattle company announced its third initiative — AI for Humanitarian Action — in September, a $40 million program focused on refugees and displaced people, the needs of children, disaster response, and human rights.