Apple announced it will spend $1 billion on a new campus in North Austin while also opening new offices in Seattle and Southern California.

In a press release, the company also sought to emphasize its economic impact across the U.S., noting that it has employees in all 50 states and is on track to meet a previous goal of hiring an additional 20,000 people by 2023. That includes the new sites announced in Seattle and in San Diego and Culver City, California, as well as expansions in current locations — such as Pittsburgh; New York; and Boulder, Colorado — through 2022.

“Apple is proud to bring new investment, jobs, and opportunity to cities across the United States and to significantly deepen our quarter-century partnership with the city and people of Austin,” said Apple CEO Tim Cook in a statement. “Talent, creativity, and tomorrow’s breakthrough ideas aren’t limited by region or zip code, and, with this new expansion, we’re redoubling our commitment to cultivating the high-tech sector and workforce nationwide.”

The investment comes at a strategically and politically sensitive time for the company. With iPhone unit sales relatively flat over the past three years and investors nervous about rumours that new iPhone sales are lackluster, the announcement projects a sense of confidence about the future of the company.

By the same measure, Apple has been one of the companies often in the crosshairs of President Trump’s tirades about overseas manufacturing. Indeed, there continues to be ongoing concern that an on-again, off-again trade war with China could damage Apple. The company seems to be going out of its way to not just announce a campus, but to drive home the fact that it touches almost every corner of the U.S. economy.

Still, the most notable part of the investment will be the 133-acre campus In North Austin that will be built about 1 mile from the current location. The new site will have 5,000 employees, with the potential for 15,000. During a press conference, Apple said in a press conference that the construction is going to take a while: the first building will open in 30-36 months.

With 6,200 employees, Austin was already Apple’s second biggest site outside Silicon Valley, and it is on track to become the city’s largest employer.

The company also said it hired 6,000 people in the U.S. last year, bringing its total domestic employment to 90,000. That includes a new office recently opened in Nashville, Tennessee.

The ongoing expansion will include another $10 billion of spending on new U.S.-based datacenters through 2023. The company claims that — including its ecosystem of suppliers and manufacturers — its products have created 2 million jobs in the U.S. It also credits its App Store with fueling another 1.5 million U.S. jobs. 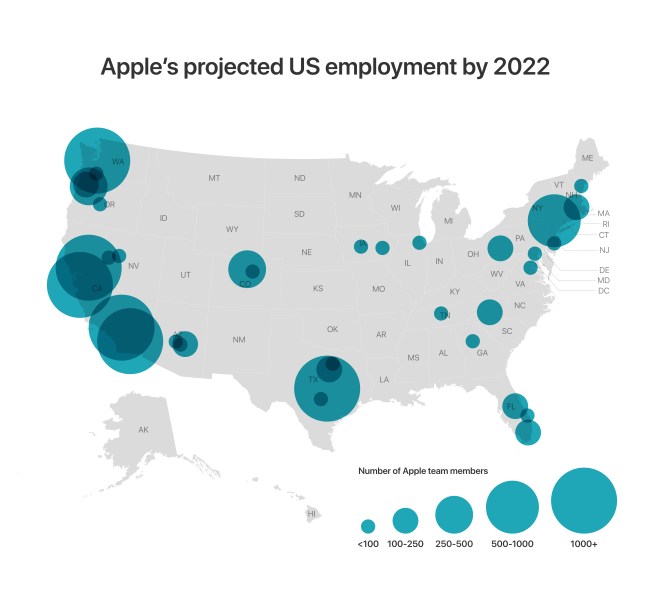 Finally, the company says it now has retail stores in 44 states and D.C., has hired 7,000 retail workers over the past five years, and is still expanding its retail footprint in the U.S.