Wisdo, an app that helps connect people facing cancer, the loss of a job, loneliness, and other major life challenges with others who have been through similar experiences, today announced it is launching out of beta with $11 million in funding. Wisdo currently has 500,000 users after beta testing for about a year.

Wisdo CEO and cofounder Boaz Gaon told VentureBeat that he started the company in memory of his father, Israeli businessman Benny Gaon, who died from pancreatic cancer in 2008. The senior Gaon was president of the Israel Association when he was diagnosed. Gaon said that even though his father was afforded access to top doctors, what the family wanted most was to talk other families with a similar diagnosis.

“We very naively thought we were this ‘ideal cancer family’,” Gaon told VentureBeat. “The truth is when you’re going through something like this that you’ve never gone through before, you’re going to make mistakes, and we made a lot of them.”

Wisdo currentlyI aI  has more than 70 communities users can join, each one tailored to users with a “shared experience.” The app is only open to users older than 18. Some communities talk about how to prepare for college, or about buying a house. Others are for survivors of sexual assault, or for users to talk about experiences with depression and anxiety. Users are also asked to create a “timeline” highlighting different steps they’ve gone through — if they’ve found a therapist or have told their family members they have depression, for example. 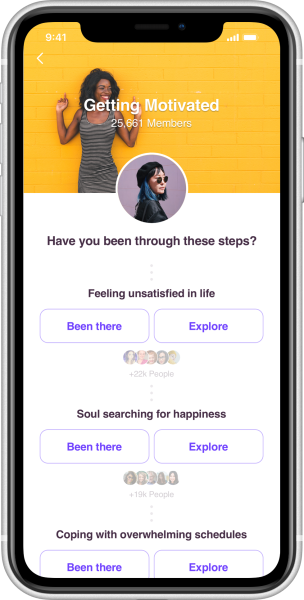 Gaon likes to compare Wisdo to crowdsourced apps like Wikipedia and Waze, rather than social apps like Facebook and Twitter. That’s because the bulk of content moderation is done by Wisdo users themselves. There are four types of roles Wisdo users can take on: Buddies, Helpers, Guides, and Super Guides. The roles with more content moderation responsibilities are given to users as they collect more positive ratings from other users.

Here’s how the hierarchy works:

Any user can sign up to be a Buddy and get paired with a Helper. Buddies and Helpers are matched based on similar experiences they’ve shared on their timeline — the Buddy is supposed to be matched with a Helper who has gone through the step(s) that they’re looking for advice on. Wisdo invites users to become Helpers based upon how many times their comments are rated as positive or helpful in the community chatrooms.

The Helpers with the highest rankings are then invited to become Guides, who lead discussions in chatrooms, send welcome messages to new users, and are given watchlists of language to look out for or flag. Lastly, Super Guides have the right to ban or suspend users and can send push notifications to specific groups.

Gaon told VentureBeat that of Wisdo’s daily active users, about 45 percent are Buddies, 10 percent are Helpers, and 3 percent are Guides. Twenty percent of Guides are elevated to Super Guides. There are private chatrooms specifically for Helpers, Guides, and Super Guides to ask each other questions, and the company gives all of them monthly training sessions in content moderation. Wisdo also has one community manager on staff who oversees the whole hierarchy and sends each new Wisdo member a message when they register for the site, laying down the ground rules — including a zero-tolerance policy for abuse, trolling, racism, and harassment.

Robyn Caplan, an affiliate with Data & Society who studies content moderation, said that one benefit of community-reliant content moderation is that community standards are developed in a much more distributed way — active users are more likely to see repeat issues than a full-time staffer who is stretched thin, for example. The problem is that moderators are doing a lot of heavy lifting for free.

Additionally, Wisdo’s moderators are taking on heavier and more personal subject matter than Wikipedia editors. I downloaded Wisdo in the last week, and in one community I previewed, some users expressed suicidal thoughts. Wisdo stresses to its users that it’s not a place to seek medical attention and that the moderators are not there to provide medical advice. But it’s not hard to see how spending six to 10 hours a week moderating a chatroom where users are talking about illness could wear on a person. 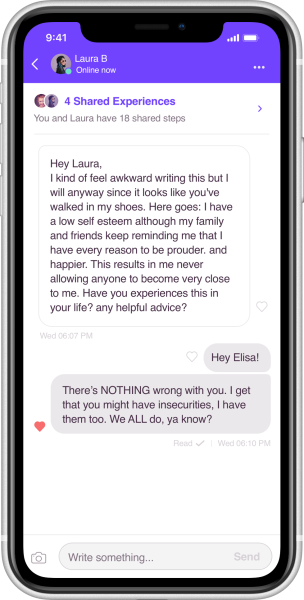 In tracking Wisdo’s trajectory compared to that of social apps like Facebook and Twitter, one other important difference is that Wisdo’s publicly named investors all have backgrounds with medicine and health care. Investors in Wisdo include Jazz Venture Partners, which has invested in quite a few neuroscience companies; Bob Nelsen, cofounder of life sciences VC firm Arch Ventures; and Richard Klausner, former director of the National Cancer Institute. Klausner told VentureBeat that he first met Gaon when his father was diagnosed with pancreatic cancer 20 years ago and then reconnected with Gaon when he was preparing to launch Wisdo.

“Any significant life transition — the value of in some meaningful way being able to ask questions and learn from others’ experience — is incredibly valuable,” Klausner, also a Wisdo board member, told VentureBeat. “Particularly for patients with diseases themselves, or their caretakers.”

Wisdo is currently pre-revenue. Gaon said that one revenue stream they’re looking at is sponsored profiles, to highlight therapists, lawyers, or other professionals.

“When we polled our members to see what kind of business model they would want us to pursue — they overwhelmingly requested that we highlight services,” Gaon told VentureBeat. “People are trying to figure out the best things to spend their money on.”

With Snapchat and Twitter having lost daily active users last quarter, there’s certainly opportunity for a new social app. But as apps like Imzy, Peach, and Ello will tell you, the road is tough. Wisdo’s positioning as a place to discuss serious topics could either drive away people looking for light-hearted conversation or attract users seeking more meaningful interactions.