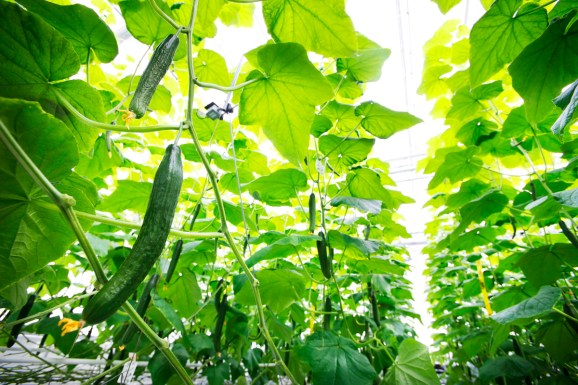 Members of Microsoft Research, together with students from Dutch and Danish universities, have won a cucumber-growing competition held in autonomous greenhouses at Wageningen University and Research in Holland.

Team Sonoma, as it’s known, beat out competitors from Tencent, Intel, and human horticulture experts and was the only team to grow more than 50 kilograms of cucumbers per square meter, according to Wageningen University officials.

The competition included five teams, which ran greenhouses remotely from other parts of the world, as well as a human team to enable performance comparisons between traditional and AI approaches. AI systems were required to control actuators and make decisions for factors like water amounts and sunlight levels, with humans only allowed to intervene to do things like cut cucumbers from the vine.

Team Sonoma was the clear winner throughout the competition in total production of cucumbers, followed closely by the human cucumber growers. Team Sonoma also beat the human team in overall net profit. Student members of Team Sonoma came from the University of Copenhagen and Wageningen University.

Team iGrow from Tencent and the Chinese Academy of Agricultural Science finished in second place overall.

For achieving some of the lowest levels of costs, labor, electricity use, and carbon dioxide output of competing teams, iGrow was also acknowledged by a jury of peers for the best AI strategy, according to Silke Hemming, director of the Wageningen University scientific research team that hosted the competition.

Following a hackathon to build AI models this summer, the Autonomous Greenhouse Challenge took place between August 27 and December 7.

Teams were not just competing to grow the most cucumbers; they also had to demonstrate sustainable practices. Total production accounted for 50 percent of team points, while AI strategy was worth 30 percent of points and sustainability the remaining 20 percent.

Team Sonoma achieved the highest sustainability score, though human teams used lower levels of electricity per kilogram of cucumbers than any of the AI teams.

In third place overall was The Croperators, a team made up of employees from companies Delphy and AgroEnergy.

Deep Green, made up of Intel employees and National Autonomous University of Mexico students, came in last place in total production and total overall score.

In a post announcing results Thursday, Wageningen University and Research said the competition does not mean that all greenhouses will now be run by computers.

“First of all, the scale of the Challenge was limited. In addition, there are many decisions and [plenty of] crop work in and around greenhouses for which people are indispensable,” the post said.

The competition was sponsored by Tencent Exploration Team, an initiative for funding promising companies and projects from the Chinese tech giant.

Cucumbers were chosen for the challenge, Tencent chief exploration officer David Wallerstein told VentureBeat in an exclusive interview, because a large dataset was available to train AI systems to grow cucumbers.

Wallerstein said Tencent chose to fund the challenge in order to better explore indoor farming at a time when cities are continuing to grow and climate change is of increasing concern.

“I think the opportunity we see is for kind of a decentralization of global agriculture and moving agricultural productivity or growth potential closer to cities and into cities,” he said. “There’s all kinds of ways that we can reimagine how certain spaces are used and how we source our food. And we think it’s an important opportunity for humanity to diversify its food resources, as well as ensuring we’re eating healthier diets.”

At more than 3 million hectares, China has the most greenhouses in the world, according to information compiled by the International Society for Horticulture Science. European nations like Spain, Italy, France, and the Netherlands are ranked among top 10 indoor farming countries in the world.

Attention to indoor farming may be growing among tech giants. Earlier this week, GV (formerly Google Ventures) led a $90 million funding round in Bowery, a company that uses AI to grow produce and that plans to open vertical farming operations near U.S. cities in 2019.