The next generation of automotive processor has finally arrived, says Arm Holdings. Today, the Softbank-owned British semiconductor and software company — which is perhaps best known for its role in designing billions of smartphone, tablet, and smartwatch chips sold worldwide — took the wraps off of the Cortex-A65AE (formerly Helios-AE), a 7-nanometer processor tailor-made for autonomous and semiautonomous cars’ high-throughput workloads.

The latest addition to Arm’s Automotive Enhanced portfolio joins the Cortex-A76AE, which was announced in September, and it’s positioned to cement the chipsets’ dominance in the advanced driver assistance systems (ADAS) market. The company says that, to date, 15 automotive chip makers tap its designs to drive 85 percent and 65 percent of in-vehicle infotainment (IVI) and advanced driver-assistance features like adaptive cruise control and collision avoidance, respectively.

“Per year, 5.3 trillion miles are driven in cars and light vehicles depending on Arm processors,” Lakshmi Mandyam, vice president of Arm’s automotive division, said. “Winning the trust of consumers is critical, and to deliver these trusted experiences carmakers need solutions that achieve the right balance of innovation and safety while being deployable, scalable and ready for mass production.”

Toward that end, the Cortex-A65AE is a graduate of Arm’s Safety Ready, which means it’s undergone a litany of tests to ensure it met rigorous standards. Tests include ISO 26262 (titled “Road vehicles — Functional Safety”), the International Organization for Standardization’s (ISO) baseline for in-car electronic systems safety, and IEC 61508, the safety systems design and deployment standard published by the Electrotechnical Commission. 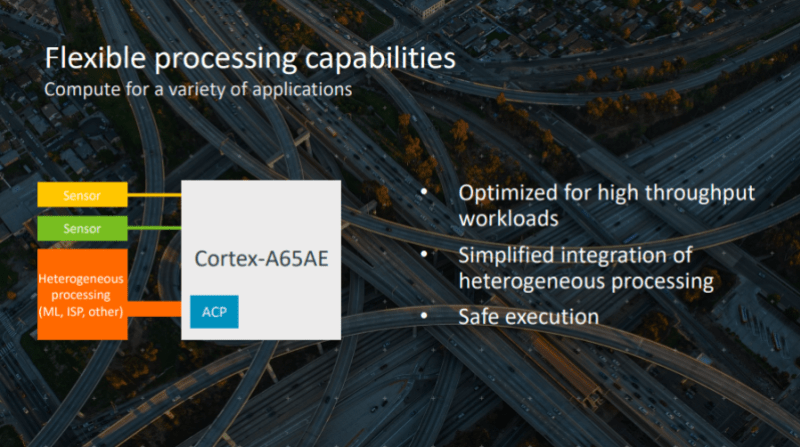 Safety Ready — which also counts among its members the Cortex-A72, Cortex-R5, Cortex-R52, Cortex A53, and Cortex M4, as well as the aforementioned Cortex-A76AE — is more than just a certifications program, according to Mandyam. She described it as a “one-stop shop” for software, tools, and components intended to reduce the overall cost for OEMs of integrating functional safety into their solutions.

“Human acceptance of new [ADAS] and increasingly autonomous technologies will only happen if drivers and passengers feel safe relying on them,” Mandyam said. “In my regular conversations with leading OEMs and tier ones, it’s clear that a broad range of compute is required to meet the needs of tomorrow’s vehicles, and one size will not fit all when it comes to the compute powering these vehicles.”

The Cortex-A65AE is no slouch when it comes to compute, speaking of. Its multicore design is capable of achieving up to 3.5 times higher throughput with superior power efficiency compared to prior generations, thanks largely to an Arm Mali-C71 graphics processing unit (GPU) and an accelerator coherency port (ACP) that can optionally connect to chips with dedicated Arm ML coprocessors for heterogeneous computing tasks. Arm says the Cortex-A65AE is designed to work in tandem with companion chips like the Cortex-A76AE as part of a compute cluster, and claims that, as a result of compiler NEON and vectorization improvements, it provides better performance than competing ADAS hardware platforms.

Additionally, like the Cortex-A76AE, the Cortex-A65AE supports Split-Lock, a feature that enables OEMs to configure CPU clusters in a system-on-chip in one of two modes. The high-performance “split mode” leverages two or four CPUs in a compute cluster, while “lock mode,” which is intended for safer, less error-prone processing, synchronizes one or two CPU pairs.

“With the processor or cores locked together, you can achieve higher levels of safety,” Mandyam said in an earlier statement. “Each operation is checked automatically in hardware. [That’s faster than] the traditional setup, where operations are sent to another chip to check if an error has occurred … Split-Lock, [has] been a game-changer in our conversations with OEMs and tier-one manufacturers.”

Cortex-A65AE, along with the previously announced Cortex-A76AE, will begin shipping in vehicles beginning in 2020. They’re just the start — Arm’s new AE roadmap includes the Hercules-AE and Cortex-R, which the company says it will detail at a later date.

“In order to achieve higher levels of autonomy, there will be a large increase in the number of sensors monitoring the surroundings of the vehicle, including cameras, lidar and radar, resulting in a significant increase in throughput and compute requirements to process this data safely,” Mandyam said. “The Cortex-A65AE is ideal for managing the high throughput requirement for gathering sensor data and can be used in lockstep mode connected to accelerators, such as ML or computer vision, to help process the data efficiently. But what’s most critical is that it does this with a high level of safety capability.”