Palo Alto startup Luminar today announced a collaboration with Autonomous Intelligent Driving (AID), Audi’s driverless technology spinoff and a supplier for Volkswagen Group brands, such as VW and Porsche, to accelerate the latter’s goal of bringing to market fully self-driving cars by 2021.

This marks the second such partnership between the two companies, which teamed up in June to outfit prototypical autonomous cars with object-detecting lidar sensors. According to Alexandre Haag, AID’s chief technology officer, Luminar remains a “key player” in the company’s broader deployment plans.

“Having started out just last year, our aim is to work with the best brands within the industry to accelerate our vision that will be realized across the entire VW Group,” he said.

Luminar, for the uninitiated, emerged from stealth in April 2017 with more than $36 million in funding from 1517 Fund, Canvas Ventures, and GVA Capital. Its sensors measure distance by emitting a laser pulse and calculating the time it takes for light to scatter off of surfaces. Unlike most competing lidar sensors, they operate at the 1,550-nanometer wavelength, making them “eye-safe” and up to 40 times more powerful than conventional alternatives. Luminar claims an “industry-leading” range of more than 250 meters and a 120-degree field of view.

In Munich, AID is currently testing fleets of self-driving cars with forward vision systems powered by Luminar’s sensors. The rest of its platform has been mainly developed in-house by an international team of 140 people and includes systems for ingesting and processing lidar, camera, and radar data, as well as a machine learning stack for perception and prediction, localization, and trajectory planning. 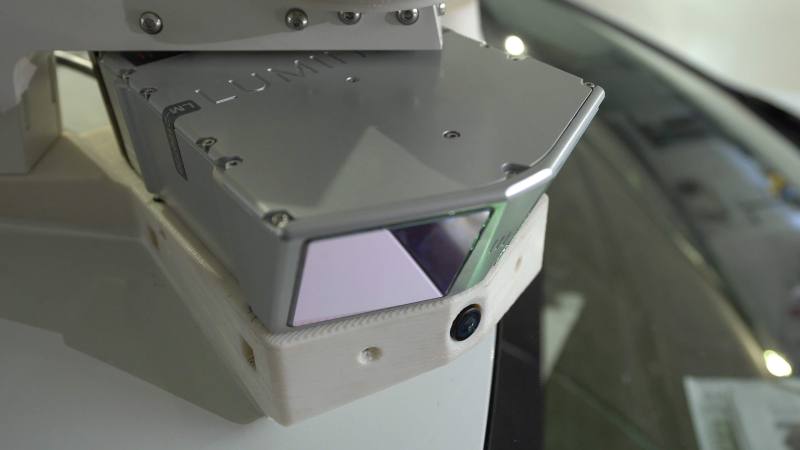 “Perception remains a bottleneck today for autonomous mobility, and we quickly worked to find the most powerful sensors to make the perception task easier,” Haag said. “That’s where Luminar comes in — the technology is clearly above the pack in terms of range and density, which is important for solving the most challenging problems in autonomy.”

Today’s announcement comes after Luminar and Volvo demonstrated a sophisticated perception technology at the Automobility LA trade show. According to Volvo, Luminar’s lidar enabled its research and development team to pursue pose estimation — a facet of computer vision that tries to understand the position of various points in an object — with the goal of predicting pedestrians’ body language and, subsequently, their intentions. Such a tool could one day be used to identify people waiting to cross the road, bikers about to weave dangerously into traffic, or folks distracted by their phones.

“Autonomous technology will take driving safely to a new level, beyond human limitations,” Henrik Green, senior vice president for research and development at Volvo Cars, said in an earlier statement. “Luminar shares our ambition in making those benefits a reality, and this new perception technology is an important next step in that process.”

Luminar in June announced Volvo as its second public partner, following the September 2017 reveal of Toyota Research Institute as its first. The Swedish car company made a “significant investment” in Luminar through its newly launched Volvo Cars Tech Fund, which targets “high potential” technology startups in the areas of artificial intelligence, autonomous driving, digital mobility services, and electrification.

The lidar market is estimated to be worth $800 million by the end of 2018, with the figure forecast to rise sharply to $1.8 billion in 2023 — and there’s plenty of competition to go around.

“AID is an ideal partner for Luminar, with the backing and resources of the world’s largest OEM while maintaining a fresh software-minded spirit of a high-growth startup,” he said. “Together, our teams are able to achieve rapid development with an agile, hands-on approach — combining hardware and software expertise to enable autonomous mobility service by 2021.”