Elephants could be extinct by the end of the next decade. Soberingly, an estimated 100 African forest elephants are killed each day by poachers seeking ivory, meat, and body parts; the world’s population drops by one animal every 15 minutes. At the current rate, within the next 10 years, the remaining 100,000 elephants alive today — down from a peak population of more than two million — are on track to be eliminated.

Efforts have long been underway to prevent illegal poaching, but limited resources make it difficult for law enforcement to catch criminals in the act. (Serengeti National Park, which covers roughly 6,700 square miles, employs only 150 rangers.) That’s why Resolve, a nonprofit organization founded in 1977 to advance best practices and ethics in the resolution of environmental, social, and medical challenges, partnered with chipmaker Intel to develop a machine learning-driven solution: TrailGuard AI.

It’s not the first time technology has been tapped to combat human-elephant conflict. In 2016, in partnership with Tanzanian Wildlife officials and the Mara Elephant Project, Resolve deployed a fleet of low-cost drones that shepherded elephants away from farms and communities. And Conservation Metrics, a recipient of Microsoft’s AI for Earth grant program, uses an AI system to isolate the sound of elephant calls — specifically, the low-frequency rumbling they use to communicate with one another — from recordings to derive insights like population size and herd movement.

But TrailGuard is one of the few solutions to tap Intel’s Movidius Myriad 2 vision processing unit (VPU) — the same chip inside Google’s Clip, Flir’s Firefly, DJI’s Phantom 4, and Tencent’s DeepGaze camera. The VPU packs dedicated hardware chips for computer vision and a dozen purpose-built (SHAVE) processor cores that speed up execution of machine learning algorithms, all while drawing only around a watt of power.

“Intel … has enabled us basically to build an intelligent sentinel for practically every corner for Africa’s iconic wildlife parks. AI-driven smart cameras will help park rangers identify poachers and stop them before they can kill,” Eric Dinerstein, director of Resolve’s Biodiversity and Wildlife Solutions division, said.

TrailGuard AI — which was designed to be hidden in bushes and brush, and which measures roughly the size of an index finger — detects motion with an embedded camera using an offline, on-device AI algorithm. If it recognizes humans or vehicles in any captured frames, it alerts park headquarters.

According to Resolve and Intel, an earlier incarnation of TrailGuard technology helped cut down on poaching near the western border of Serengeti National Park. Within the first 15 months of its installation, it identified members from over 20 poacher gangs.

Those prototypes, however, sent images in bulk and could be easily tripped by false positive such as swaying branches and wildlife. Additionally, they required a connected minicomputer for data processing, which shortened their battery life and increased their bill of materials. 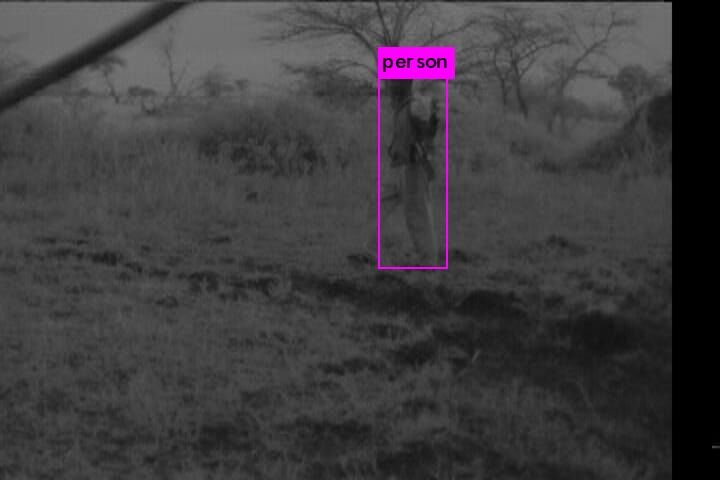 Above: A person detected by TrailGuard.

By contrast, TrailGuard AI leverages convolutional neural networks — a class of deep neural nets, or layers of functions that loosely mimic the behavior of neurons in the brain — to selectively transmit photos over a local network. Resolve’s engineers effectively “taught” the AI system to recognize suspicious activity using hundreds of thousands of photos taken from a variety of angles, poses, and contexts, imbuing it with the ability to make judgments about the contents of snaps.

That and other innovations enable the cameras to detect sophisticated illicit operations, such as those involving snares snaked over a wide area. Rangers carefully place TrailGuard AI units along known poacher transit routes, allowing them to find and disable traps and pursue poacher gangs more quickly than might be possible with conventional means of detection.

The images TrailGuard does choose to transmit are small in size — about 20KB — in order to save on bandwidth. TrailGuard AI cameras initially sent images over 3G GSM cellular, but the network’s limited range led the development team to install cigar-box-sized satellite transmitters that communicate via LoRa, a long-range wireless technology. (Future cameras will be capable of satellite connectivity themselves, eliminating the need for the need for discrete gateways.)

They’re anything but battery hogs, though. In order to maximize energy efficiency, TrailGuard AI cameras use a passive sensor; the entire hardware stack, including the camera and imaging sensors, only powers on when said sensor detects movement. Intel claims a camera can last up to 1.5 years without depleting the battery.

Catching poachers in the act is only the start. TrailGuard lays the foundation for other low-power vision detection systems, Resolve and Intel say, like a system that alerts villagers when animals leave a reservation or that identifies boats of illegal miners and oil and gas explorers.

“By pairing AI technology with human decision-makers, we can solve some of our greatest challenges, including illegal poaching of endangered animals,” Anna Bethke, head of AI for Social Good at Intel, said. “With TrailGuard AI, Intel’s Movidius technology enables the camera to capture suspected poacher images and alerts park rangers, who will ultimately decide the most appropriate response.”

In partnership with the National Geographic Society, Leonardo DiCaprio Foundation, and others, TrailGuard AI will be deployed in 100 reserves in Africa throughout this year, starting with Serengeti and Garamba, with plans to expand to Southeast Asia and South America.

“Edge computing technology has the power to revolutionize the way we understand and protect our natural heritage,” Dr. Fabien Laurier, vice president of National Geographic Labs, said. “National Geographic is excited to work with Intel on TrailGuard AI and deploy these anti-poaching systems throughout Africa. This collaboration is critical to accelerating conservation and working toward our
mission of achieving a planet in balance.”

Resolve received support for the project from Intel’s AI for Social Good initiative, which aims to support startups and projects looking to solve a variety of problems. Since its creation in April 2018, AI for Social Good has supported historical preservation efforts for the Great Wall of China, helped to develop an AI system that translates facial expressions into movements for motorized wheelchairs, and participated in a competition between Microsoft and Tencent to see who can most efficiently grow cucumbers in automated greenhouses.