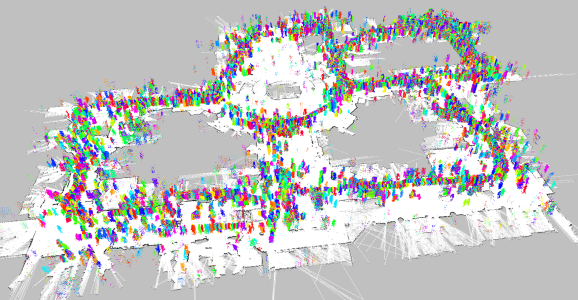 A map of people inside a large store

Explorer joined forces with Standard Cognition in part because the use of mapping technology in a retail setting is moving faster than opportunities in autonomous driving, company cofounders Akshay Goel, Tushar Dadlani and Nagasrikanth Kallakuri wrote in a blog post today announcing the acquisition.

“Originally, Explorer.ai set out to conquer mapping for the autonomous vehicle world,” the trio of cofounders said in a Medium post. “But we found that, overall, the autonomous vehicle world was moving slowly  —  much more slowly than we were  —  given the safety requirement of such a system. We realized that we would need to either raise a lot more money or join forces with another company in order to succeed in this environment.”

As part of the acquisition, the Explorer team of seven will join Standard Cognition, and Explorer cofounder Akshay Goel has been named head of internal product.

Since then, however, Amazon has since opened two Go stores in San Francisco, may open more inside airports, and may even place smaller Go stores inside company offices or spaces like hospital lobbies.

In September 2018, sources familiar with the matter said Amazon may open as many as 3,000 Go stores of various sizes by 2021.

Likewise, Standard Cognition plans to expand to thousands of stores in Japan, as well as others in Europe and North America.

Unlike Amazon, Standard Cognition wants to sell its solution directly to the owners of brick-and-mortar stores — allowing them to take the same approach as Go stores.

Cashierless stores use a combination of cameras, smartphones, and computer vision to allow people to walk in and out of a store without ever stopping at a cashier counter for payment.

Both Standard Cognition and Explorer.ai are based in San Francisco.