Among other announcements at its 2019 CES press event today, Intel revealed that it has developed a new 5G system-on-chip solution called Snow Ridge — but it’s not targeted at smartphones or tablets. The new chip is instead designed to be used in wireless base stations, and at the edge of 5G networks, enabling carriers to boost the “intelligence” of next-generation networks.

Intel expects that Snow Ridge will take it from a 0 percent market share in wireless base stations as of 2014 to over 40 percent in 2022. A demo of the chip suggests that it will be able to separately serve multiple data streams for completely different types of applications, ranging from remote surgery to virtual reality, with a cumulative bandwidth of 100 gigabits per second. 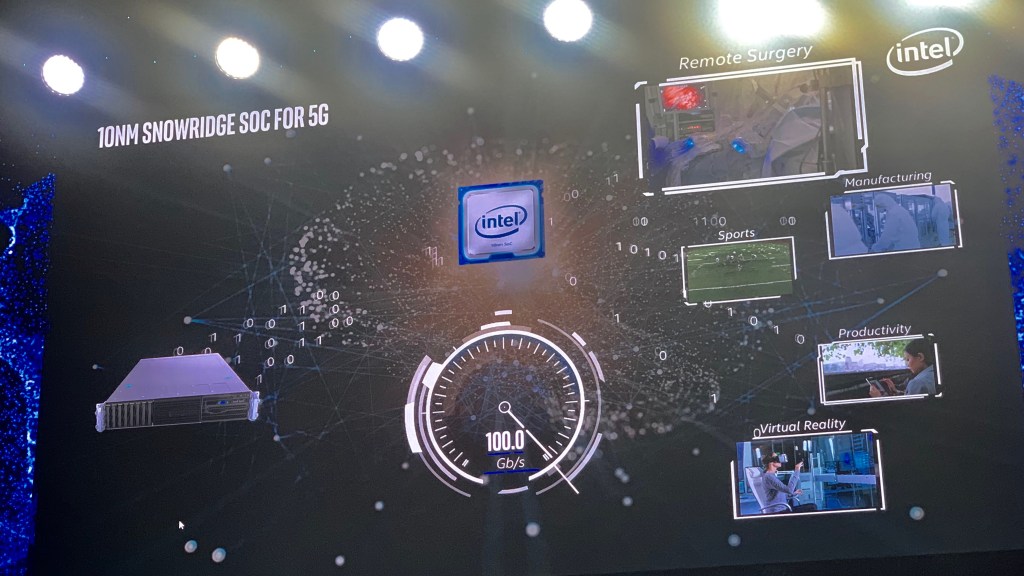 Above: Intel shows how Snow Ridge will enable wireless base stations to stream multiple types of data at once, with massive data rates.

Many industry observers have been waiting for Intel to announce more 5G consumer device commitments for 2019, as it has been largely silent on that topic since the 2018 Mobile World Congress — quite possibly due to 5G miniaturization, thermal, and power consumption engineering challenges. Throughout 2018, Intel was overshadowed in consumer 5G announcements by Qualcomm, which today claimed that it has won almost all of this year’s 5G device contracts: already “30+” for 2019.

By comparison, Intel’s first-generation 5G chips have been used in testing platforms, and were previously announced for inclusion in laptop computers for the 2019 holiday season. The company’s second-generation consumer chips are expected to be available by the end of 2019 for inclusion in 2020 devices — likely including Apple’s first 5G iPhone. T-Mobile also said today that it’s working with Intel on 5G solutions for its low-band 600 Mhz network.