Samsung kicks off each year by unveiling a range of laptops at the CES trade show. CES 2019, which officially starts tomorrow, is no different. The South Korean electronics company today added two new devices to its laptop offerings: the Notebook 9 Pro, a high-end laptop that doubles as a tablet, and the Notebook Flash, aimed at users with a smaller budget.

Let’s start with the premium device. Beneath the aluminum exterior with diamond-cut edges, the Samsung Notebook 9 Pro features a 13.3-inch full-HD (1,920 x 1,080 pixels) display with 6.7mm narrow bezels running around it. It is powered by an 8th gen Intel Core i7-8565U processor, coupled with Intel UHD 620 GPU, 8GB of LPDDR3 RAM, and 256GB of PCIe NVMe SSD.

Power users may also appreciate the two Thunderbolt 3 ports on the Notebook 9 Pro for faster data transfers. There is also one USB-C port, one microSD card slot, and a 3.5mm headphone jack. The Notebook 9 Pro houses a 55Wh battery, which the company claims supports fast charging (no word on how fast “fast” is) and could drive up to 14 hours of usage on a single charge. Dual 1.5W stereo speakers on this device, coupled with company’s Thunder Amp tech, can offer loud audio output, the company claims.

There is no word on the pricing of the Notebook 9 Pro, but that should be revealed soon as the company is targeting “early 2019” as its shipping date. 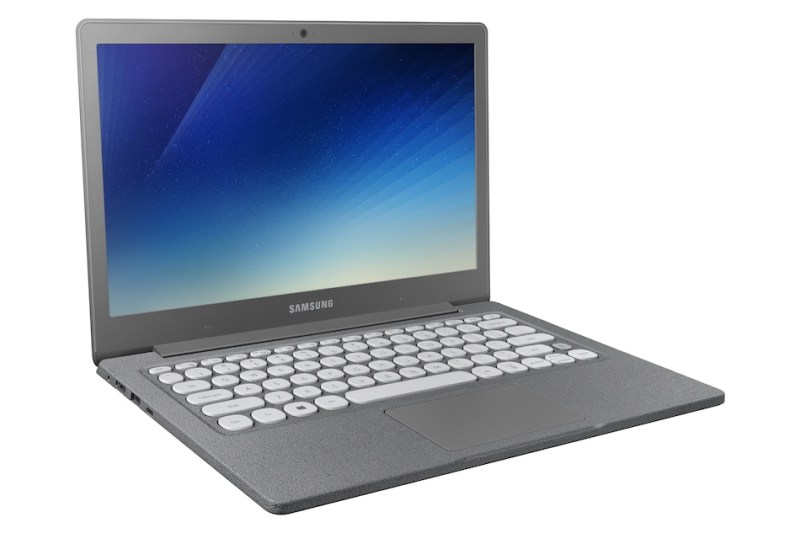 But besides that set of specs, we are left with watered-down hardware modules. The Notebook Flash comes in two variants: The base model, priced at $350, is powered by an Intel Celeron N4000 processor; an additional $50 will get you a model with the slightly better Intel Pentium Silver N5000 CPU. Either variant comes with 4GB of RAM and 64GB eMMC storage.

On the connectivity front, users will have to make do with two USB-C ports, one USB 3.0 port, and a USB 2.0 port. There are also dedicated slots for HDMI and a microSD card, as well as a 3.5mm headphone jack. The built-in 39Wh battery can drive up to 10 hours of usage on a single charge (no support for fast charging here), and there is a non-HD web camera.

The Notebook Flash goes on sale in the U.S. from January 15 on Amazon and Samsung’s website.

If you’re looking for a gaming laptop, Samsung yesterday unveiled a refreshed Notebook Odyssey, its most powerful gaming laptop to date. The Notebook Odyssey features a 15.6-inch full HD display with a 144Hz refresh rate, Nvidia’s flagship RTX 2080 GPU, Intel’s 8th Gen Core i7 processor, 16GB of RAM, and 256GB NVMe SSD with a 1TB hard drive. No word on the price yet, but the company plans to begin shipping it in “early 2019.”