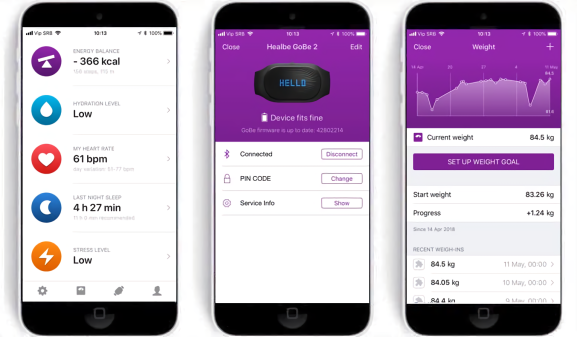 Healbe, the startup behind the ill-fated GoBe, a wearable it said could track calorie intake through the skin alone, has returned to the Consumer Electronics Show with a new wearable in tow: the GoBe 3. Healbe’s claims are no less fantastical this time around.

In a press release, Healbe cited research from the University of Davis Foods for Health Institute that found the GoBe 3’s algorithms to be 89 percent accurate at tracking calories and hydration over a two-week period. But the study involved only 27 volunteers, and it hasn’t undergone peer review.

Healbe advertised the original GoBe as a “100 percent automatic body manager,” and said that, in addition to calories and hydration, it was capable of measuring sleep patterns, stress levels, and “emotional state.”

GoBe’s underlying technology — Flow — has its roots in now-defunct Russian company Algorithm, which began developing a monitor that could monitor glucose levels without drawing blood in 1999. After four years and 500 tests, according to HealBe, Algorithm’s four-person team managed to develop a first-of-its-kind glucose-tracking algorithm.

The results of those tests have never been published, and Healbe’s initial claims about its GoBe wearable were based on a study of five people measured over five days.

Healbe says that it acquired Algorithm’s technology in 2012, after which it adapted it to count calories both burned and absorbed. Specifically, Healbe says it designed a piezoelectric impedance sensor to push high- and low-frequency signals through wearers’ wrists, where the signals are modified by water released as the cells absorb glucose. Over the course of hours after digestion, Healbe says, the sensor can track calories within a ballpark range.

Healbe’s next stop was Indiegogo, where the $299 first-generation GoBe raised more than $1 million from 4,500 people.

The company missed its promised ship date, and reports emerged that the company’s CEO, Artem Shipitsyn, had invested between $900,000 and $3 million in GoBe. He later admitted to a Russian publication that Healbe chose Indiegogo because of its “[lower] barriers to entry.”

Healbe’s second attempt — the GoBe 2 — arrived in 2018, packed with five sensors in addition to the impedance monitor — including a galvanic skin response sensor, accelerometer, gyroscope, and magnetometer — that ostensibly enabled it to track steps and measure heart rate more accurately than the previous generation. It debuted alongside a revamped companion app for iOS and Android that automatically broke down the calorie count into fat, carbs, and protein.

Reviews were mixed. Daniel Cooper, writing for Engadget, praised the accuracy of the HealBe 2’s sleep tracking and said its calorie-tracking algorithms were “pretty close” to the handwritten notes he took. But Medical Futurist characterized many of the wearable’s measurements as “arbitrary.”

Calorie tracking via glucose monitoring isn’t complete pseudoscience — in 2002 the U.S. Food and Drug Administration cleared a device called GlucoWatch, since discontinued, that promised to draw glucose from interstitial fluid under the surface of the skin through the use of weak electric currents. But experts argue that the correlation between glucose levels and calories is somewhat weak, because people’s diets don’t consist solely of glucose-rich meals and because glucose isn’t absorbed by all cells in the body at the same rate simultaneously.

That’s all to say that we’re skeptical of Healbe’s claims.