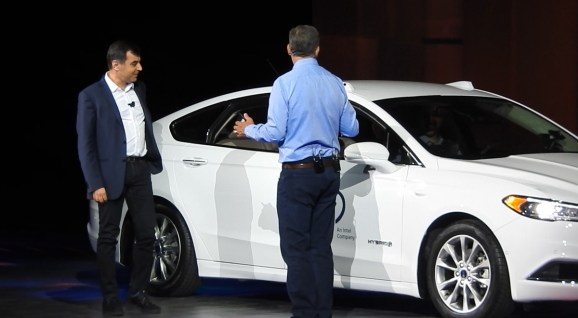 Mobileye-powered car on stage at Intel keynote at CES 2018.

Intel’s Mobileye announced plenty at its 2019 Consumer Electronics Show keynote in Las Vegas this afternoon, including a partnership with Valeo, a plan to supply a pair of China-based companies with tools to achieve truly driverless public transportation, and a mapping project underway with Great Britain’s Ordnance Survey. But one thing that slipped through the cracks was automatic preventative braking (APB), an augmented form of automatic emergency braking that uses formulas to determine when cars enter dangerous situations.

The idea is to prevent collisions by bringing vehicles a slow, gradual stop when a potential hazard comes into view.

As Amnon Shashua, CEO of Mobileye, explained in a blog post: “APB would help the vehicle return to a safer position by applying small, barely noticeable preventative braking instead of sudden braking to prevent a collision … Rather than inserting obstacles that interfere with traffic flow … APB will proactively adjust the vehicle’s speed to maintain safety only when necessary, therefore improving safety without sacrificing traffic flow.”

Shashua believes that if APB were installed with a single forward-facing camera in every car, it would eliminate a “substantial” portion of front-to-rear crashes resulting from careless driving. Furthermore, he contends that an APB system with surround camera sensing and location awareness could eliminate “nearly all” rear-end fender benders.

Those are bold claims, but Mobileye’s not exactly new to this.

In October 2017, it proposed a road-safe model for autonomous cars — Responsibility-Sensitive Safety (RSS) — at the World Knowledge Forum in Seoul, South Korea. An accompanying whitepaper described it as a “deterministic … formula” with “logically provable” rules of the road intended to prevent self-driving vehicles from causing accidents. Less abstractly, it’s a common sense approach to on-the-road decision-making that codifies good habits, like maintaining a safe following distance and giving other cars the right of way.

If they work as promised, automated accident-prevention tech like RSS and APB could be a godsend for the millions of people who risk their lives every time they step into a car. About 94 percent of car crashes are caused by human error, and in 2016, the top three causes of traffic fatalities were distracted driving, drunk driving, and speeding. According to the National Safety Council, Americans’ odds of dying in a car crash are one in 114, and in 2016, motor vehicle deaths claimed 40,000 lives.

“We … hope that ubiquitous adoption could lead to nearly zero fatalities and injuries from road accidents resulting from wrong driving decision-making,” Shashua said.