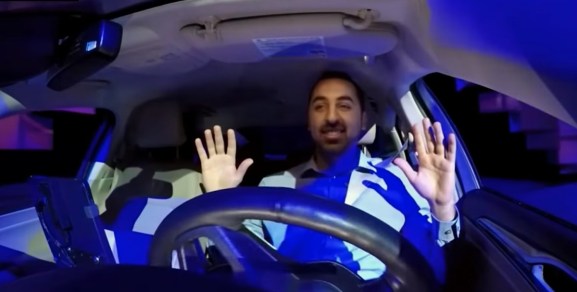 Inside a self-driving car with Mobileye technology.

Mobileye — the Israeli startup Intel acquired two years ago in a deal worth $15.3 billion — continues to make inroads in the $54.23 billion driverless car market. Following a press briefing at CES 2019 in Las Vegas, it announced that France-based auto technology supplier Valeo has embraced its model for automated vehicle (AV) decision-making — Responsibility-Sensitive Safety (RSS) — with open arms, and that Baidu, which in July pledged to integrate RSS into its Project Apollo autonomous car solution, has reported the first implementation of the technology.

“The adoption of RSS by our global partners and their willingness to invest in an RSS-based safety standard demonstrates their serious commitment to a safe autonomous future,” Jack Weast, senior principal engineer at Intel and vice president of Mobileye’s Automated Vehicle Standards division, said.

Valeo told members of the press that it will collaborate with Mobileye to develop a “technology-neutral, industry-driven” safety standard based on RSS, with the goal of furthering its adoption in Europe and overseas. Specifically, it’ll assist in drafting frameworks for driverless car deployment and certification, and contribute to draft standards, working groups, and public research funding efforts tied to Mobileye’s RSS model.

As for the Beijing Public Transport Corporation and Beytai, they’ll jointly tap Mobileye’s AV solutions with the goal of improving autonomous driving tech in commercial services. They aim to work toward a new industry standard, and to promote the development of driverless car technology in buses and other forms of public transportation.

There’s no better proving ground for Mobileye’s computer vision platform, it might be argued. In a press release, the Intel subsidiary notes that the Transport Corporation is one of the largest urban transportation corporations in the world.

Mobileye’s AV offering in question consists of a software and hardware stack validated for Level 4 driverless capabilities, meaning it’s able to take control of cars with limited human input and oversight in specific conditions. In addition to cameras, cables, modems, GPS, and additional components — all powered by Mobileye’s fifth-generation EyeQ, a system-on-chip tailor-made for low-power data processing — it confers the full benefits of Mobileye’s RSS model, an open policy that imposes “common sense” constraints on the decisions driverless vehicles make. Mobileye partners also get access to its proprietary reinforcement learning algorithms, which it claims are capable of “superhuman” sight and reaction times.

News of the new ventures comes after Mobileye revealed that it’s collaborating with Ordnance Survey, Great Britain’s national mapping agency, to bring high-precision location data to U.K. agencies and businesses. Earlier in 2018, in October, Mobileye inked a deal with Volkswagen to launch Israel’s first driverless ride-hailing service. In May, it also announced a collaboration with Mapbox that will see the startup’s software ship in a “major European automaker’s” autonomous car this year.