Chipmakers and carriers spent most of 2018 talking about their 5G plans for this year, but when it came time to actually show up at the 2019 CES with 5G devices, the differences between companies couldn’t have been starker. Only one major U.S. carrier, AT&T, has yet to hold its press conference, while everyone else has already shown most of their CES cards at this point.

Having attended multiple press conferences and walked the show floor, I wanted to give you a sense of what’s being shown at CES and what’s not. Here’s a quick look at what’s here.

From a 5G standpoint, Qualcomm’s booth is easily the best at CES. Though it has plenty of other products to show off, the chipmaker made 5G the major theme of its booth and is devoting 20 or 30 percent of its floor space to 5G demos. A large animated sign beckons curious visitors to come and see what’s happening with “real 5G.” 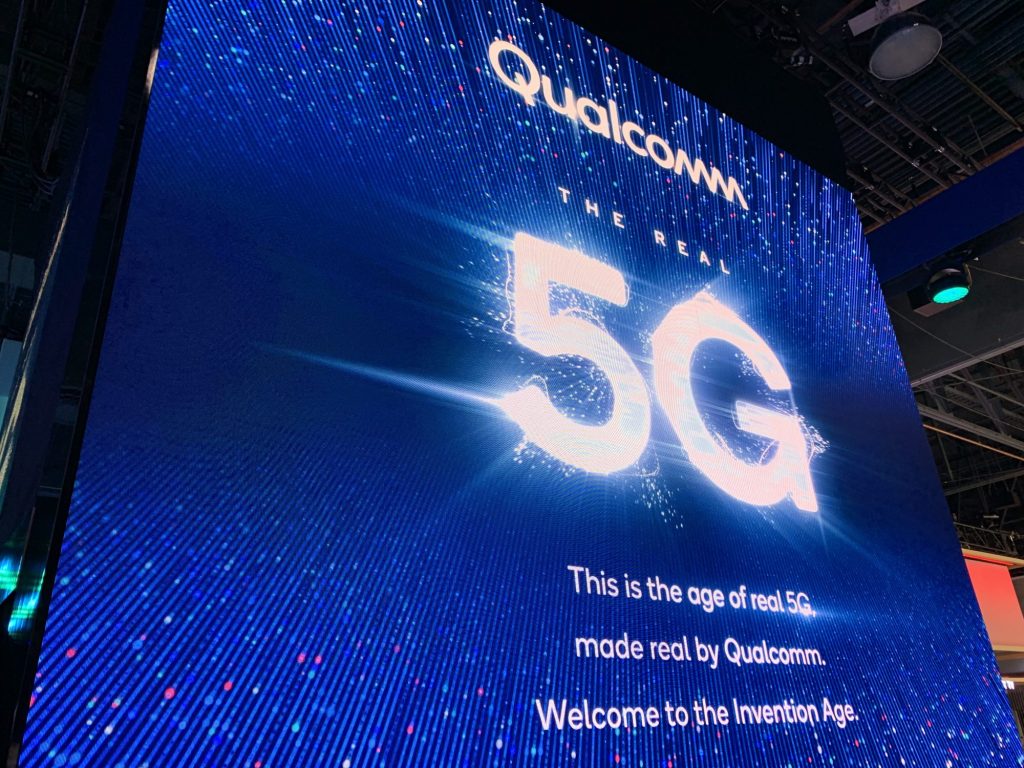 Qualcomm’s booth offers live 5G device demonstrations spanning both smartphones and VR headsets, but the first thing you’re likely to see is a display case that includes seemingly complete but non-functional 5G prototypes. The company presents an abbreviated history of its 5G development in the form of early prototype and testing devices, plus sleek phones from Oppo, Vivo, and Xiaomi. 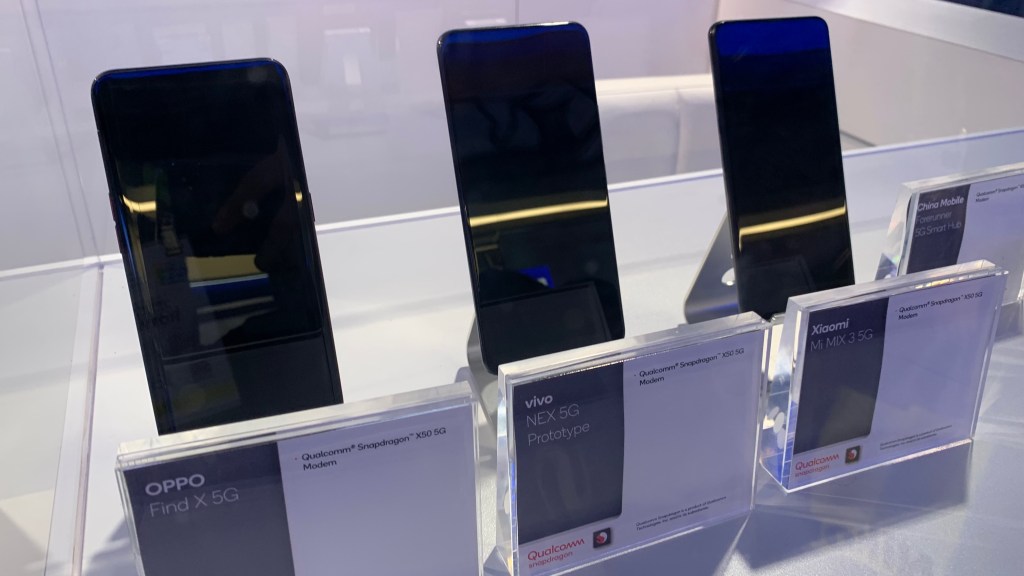 The hitch is that all three of these thin phones are for the Chinese market and are almost certainly using sub-6 GHz radio hardware in place of the larger millimeter wave (mmWave) antennas that would be needed for early U.S. 5G devices. 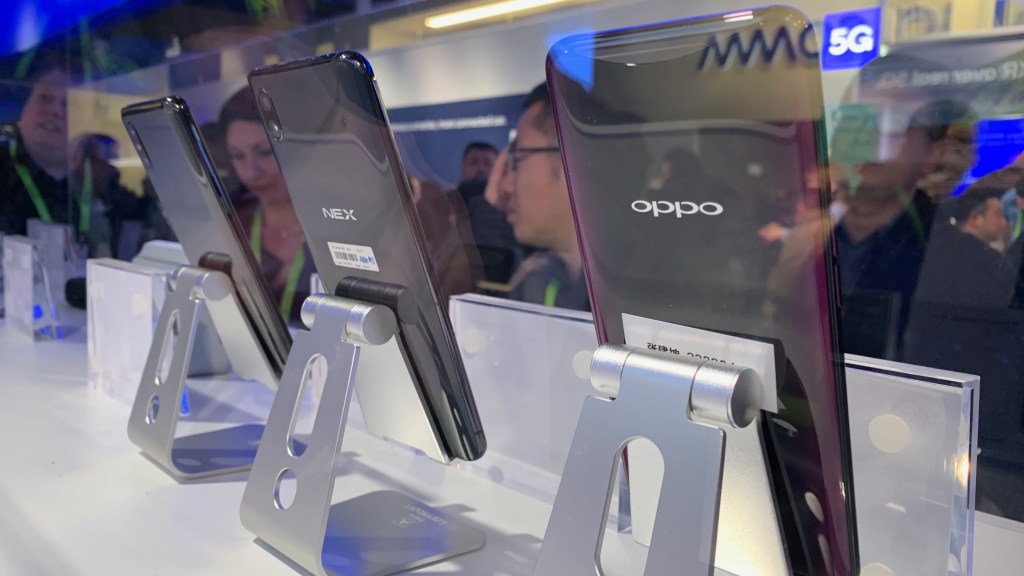 But the devices are sitting directly in front of a speedtest video highlighting mmWave’s 1.5Gbps to 1.9Gbps 5G speeds, which is arguably the only misleading element of the otherwise solid Qualcomm 5G display. A visitor who doesn’t know that mmWave 5G devices are likely to be thicker and bigger than non-mmWave models might think that the faster technology requires no design compromises. 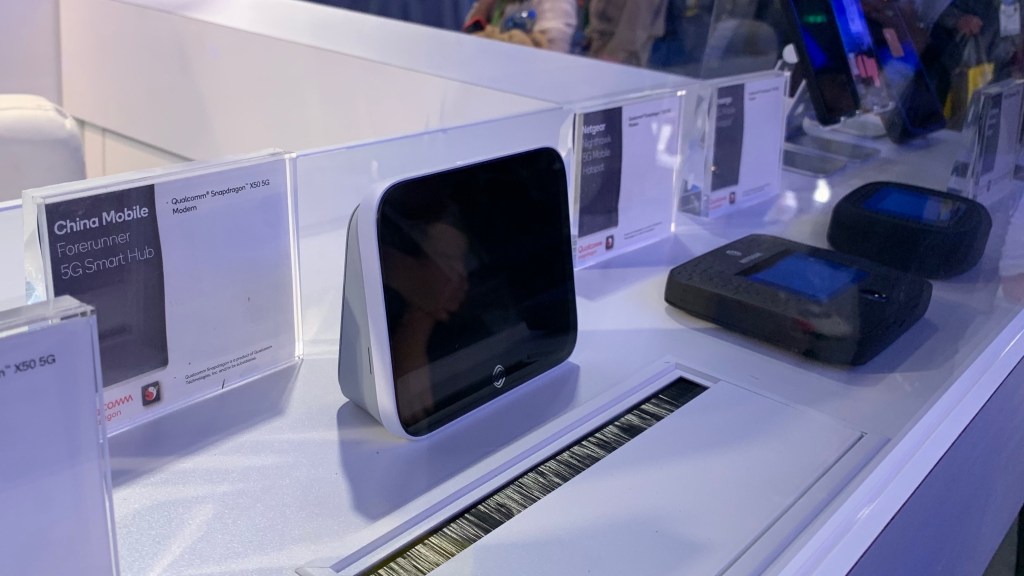 But the same display case features both Chinese and U.S. 5G hotspots, including Netgear’s Nighthawk 5G Mobile Hotspot, which is a millimeter wave device, and a China Mobile 5G Smart Hub. None is small, but all of the devices contain Qualcomm’s X50 modem, so you can get some sense of the current range of device sizes here. 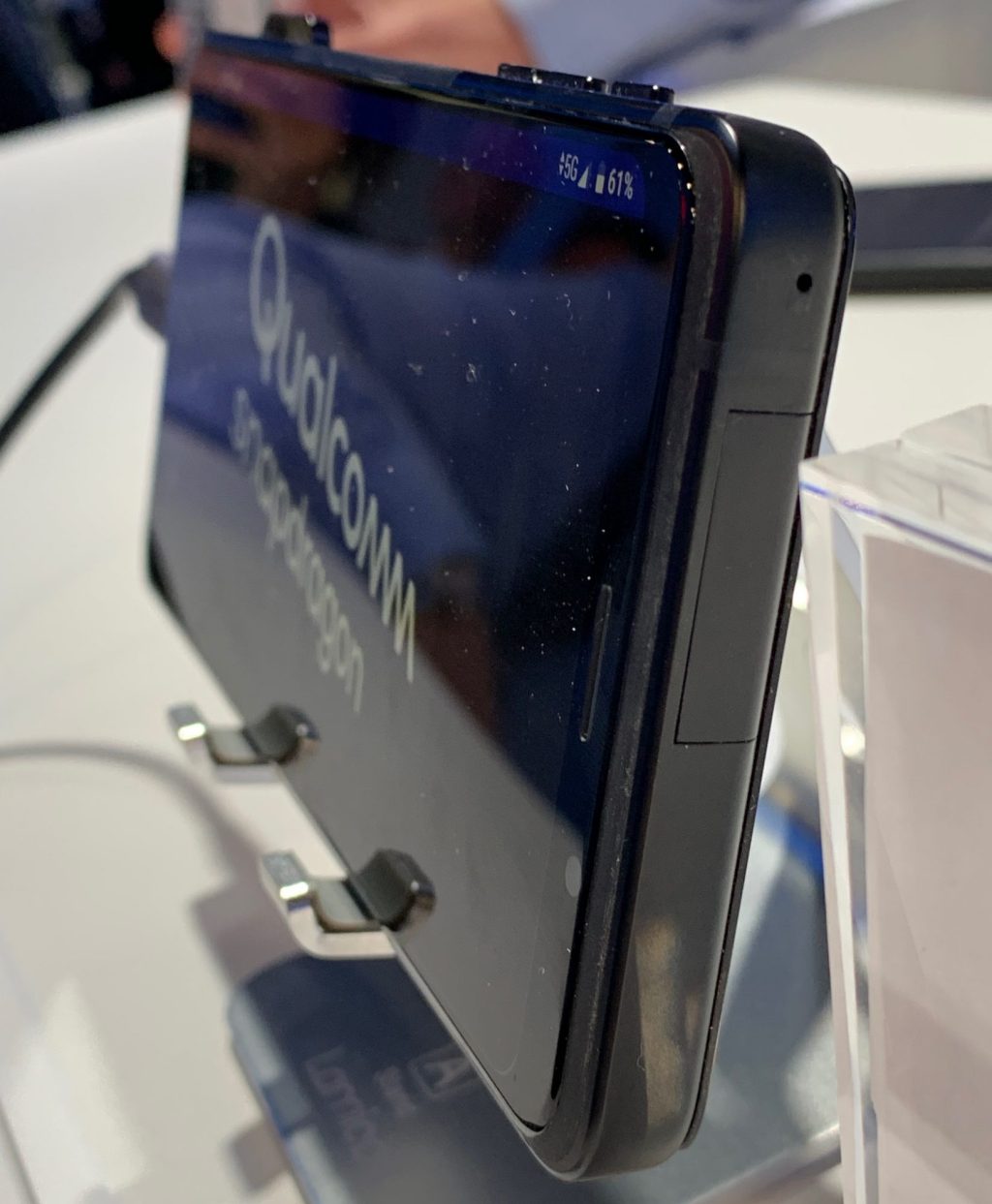 To get a sense of the actual thickness of early mmWave 5G devices, the other side of the same display kiosk contains a live 5G demo using Verizon’s network and Ericsson hardware. Video is streaming to this Qualcomm-made phone from a nearby base station. Because there are three mmWave antennas laying flat on its thinnest edges, it’s roughly comparable in thickness to Apple’s iPhone 4 — a size most users wouldn’t find objectionable. 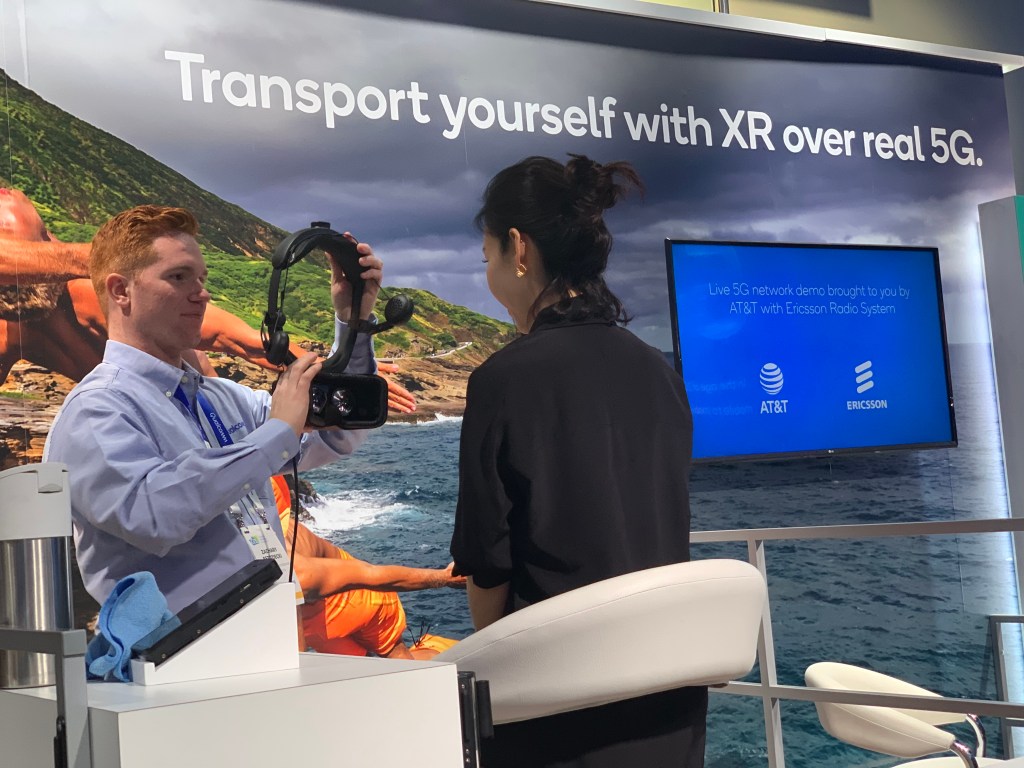 AT&T and Qualcomm are offering a demo of how VR (badged XR for extended reality) will work over 5G. A stock current-generation VR headset is linked to a Snapdragon 855 device streaming 5G VR video from nearby base stations. The demo video isn’t technically phenomenal — merely 180 degrees of horizontal head-turning freedom, with obvious pixelization — but it lets you experience a group of friends cliff diving and boating from different angles, streamed entirely over a 5G network, rather than stored on the device. That’s a quantity of data bandwidth current networks would struggle to handle.

Intel’s CES booth is probably the first you’ll see if you’re entering Central Hall from its front, and although its 5G demo area is in a prominent location, it’s small and only modestly interesting. Like its press conference, where the only new 5G announcement was an upcoming 5G system-on-chip for wireless base stations, the company’s demos all appear to be saying “we’re still working on our solutions.” 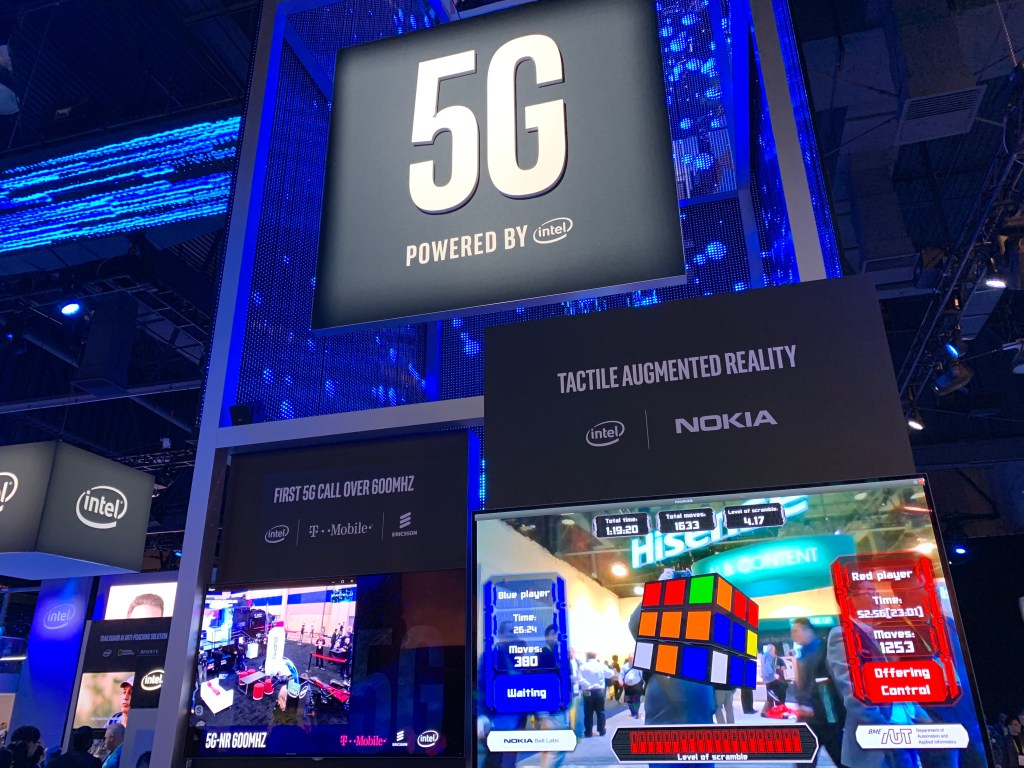 There was a somewhat bizarre Nokia Bell Labs Rubik’s Cube concept demo, which shows a virtual cube being manipulated by a physical cube you can handle — a demo designed to spotlight 5G’s low latency. But I was told that the demo was actually using a Bluetooth connection rather than 5G, and the latency of cube responses was okay, but not silky smooth or impressive. 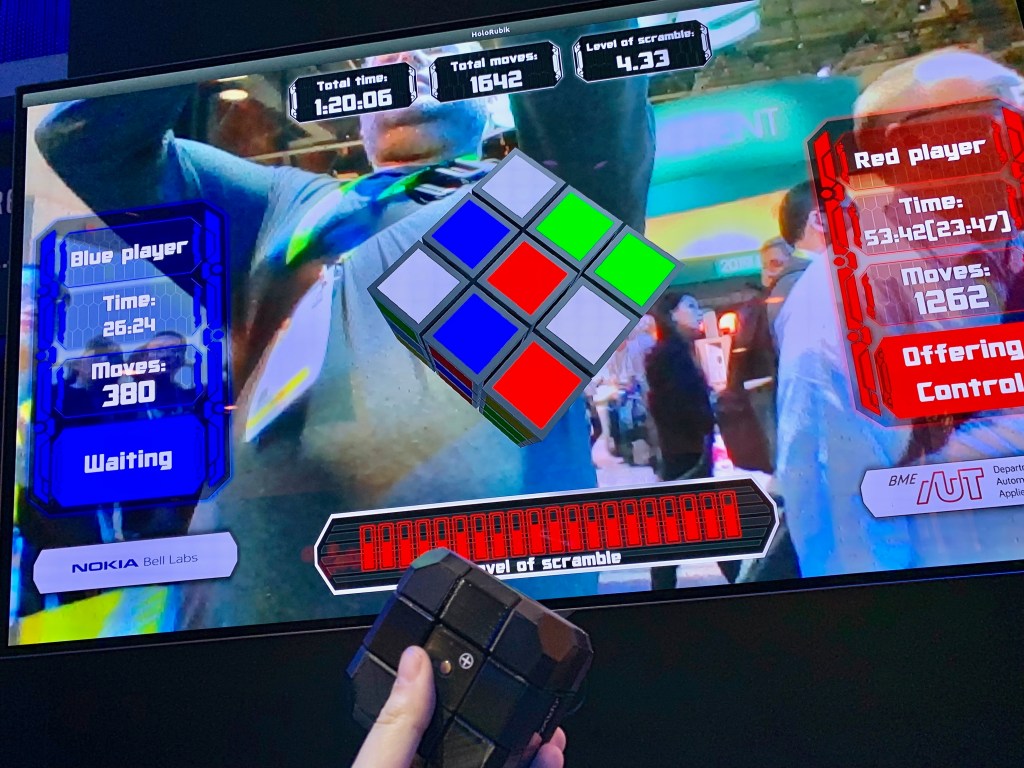 Right next to that was a demo labelled “first 5G call over 600MHz” that uses a laptop and camera at Intel’s booth to stream live Skype video back and forth from a T-Mobile demo area at a Las Vegas hotel. Once again, the 5G technology angle here was a bit confusing: A rep told me the 5G call was using 28GHz millimeter wave on the Intel booth side, connecting over some network to a 600MHz transmission from T-Mobile’s side. That’s great for network interoperability but sort of an odd way to show off T-Mobile’s low-band 5G. 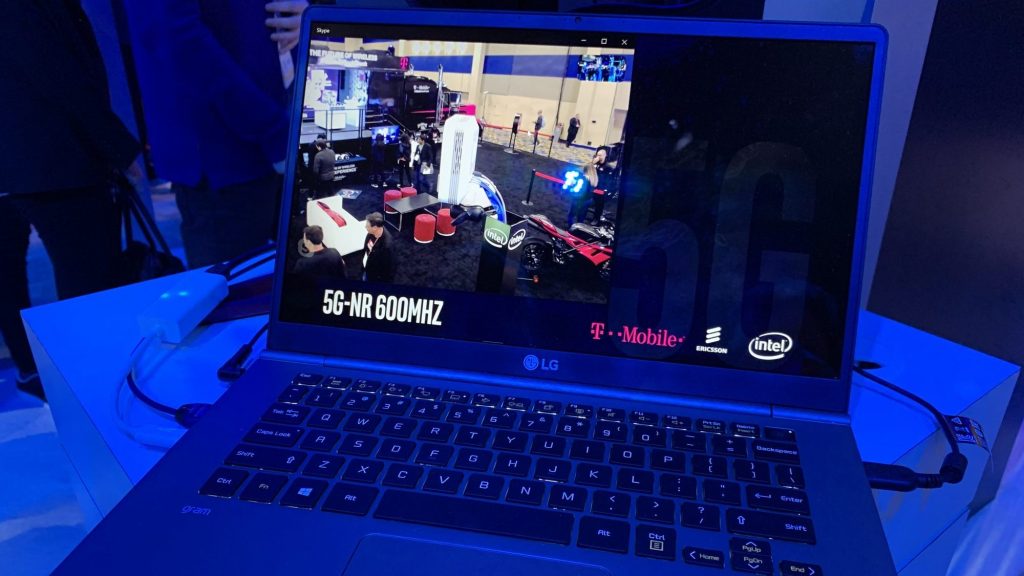 Perhaps the most meaningful live 5G demo showed how 4G and 5G connections worked with the same cloud streaming service and Tomb Raider game. On the left, a laptop on LTE displayed a slightly lower-resolution image that was more susceptible to artifacting when the camera moved wildly, while the 5G-assisted laptop on the right had a slightly cleaner image that was … less susceptible to artifacting but still not perfect. When I tested the 5G version, warning notices kept popping up on the screen to indicate a poor connection or poor latency, which might or might not have something to do with the (not especially crowded) testing environment. 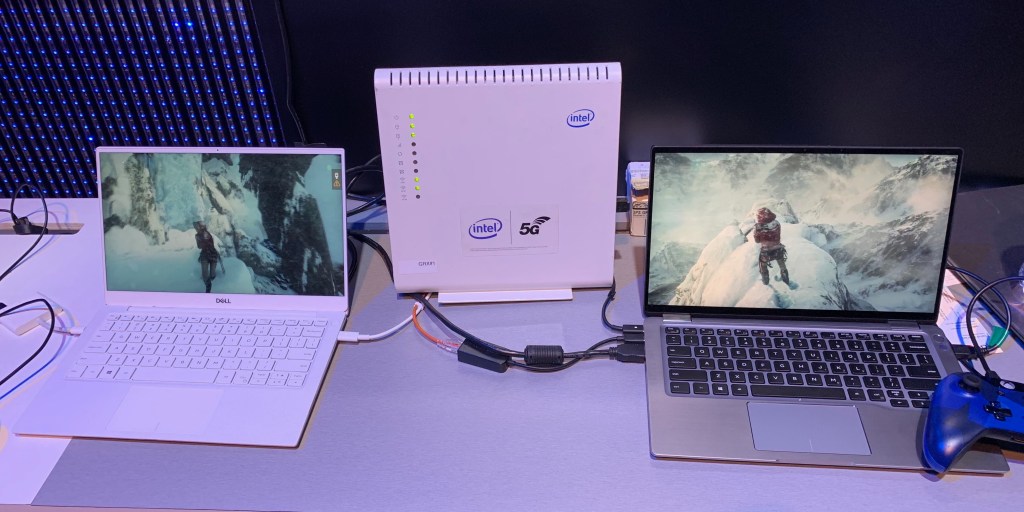 The last Intel 5G demo, Holographic Collaboration, was the most compelling on the surface, but the least impressive in practice. Two users put on Magic Leap AR headsets to collaborate on a puzzle — using depth-tracked controllers to reassemble a broken drone. A rep said the non-5G headsets are sharing content over Wi-Fi sent to two nearby 5G base stations, which then relay the signals to one another. An external camera lets you see a live image of your puzzle-solving partner. 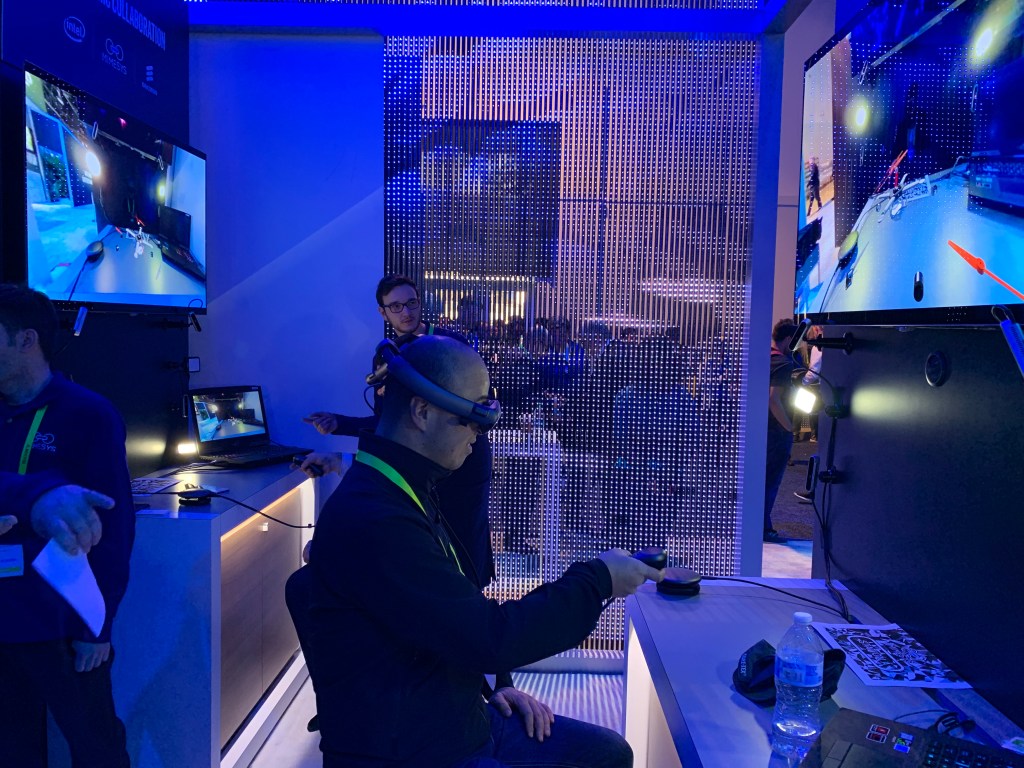 Unfortunately, the live image of your partner was hugely pixelated, grainy, and jittery. While the collaborative puzzle part goes off without a hitch, seeing what looks like a flat ghost hologram of another person felt like a fallback to the pre-4G era, not something to hope for in the 5G era. I wouldn’t blame the Magic Leap hardware for this in any way, but it isn’t a great 5G demo.

While Huawei has a nice booth at CES and has said a lot about 5G throughout 2018, it appeared to be showing exactly zero 5G products on the show floor. There were no 5G phones, base stations, or chips on display at a booth packed with laptops, 4G devices, and accessories, including Honor-branded devices. A rep on the show floor confirmed that the company had no 5G products or news for this year’s CES. 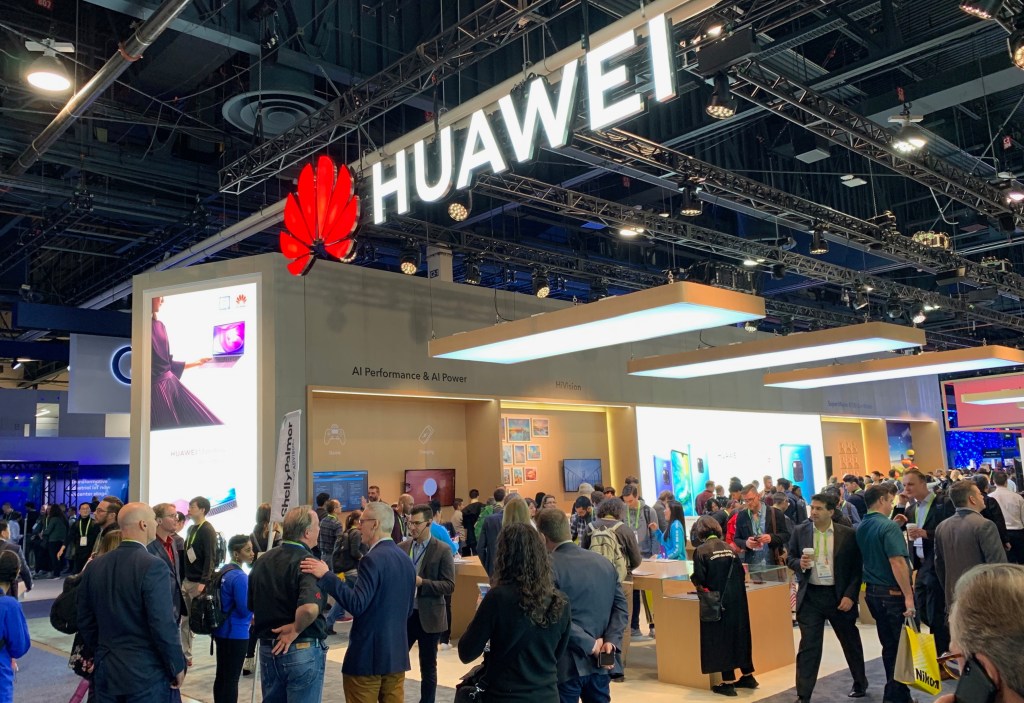 That’s not entirely surprising, given that Huawei’s 5G division had a terrible 2018, as multiple countries and carriers blocked the company’s 5G hardware from their network buildouts. Even so, I was disappointed not to see the company’s Balong 5G01 chip or some other 5G technology display to cater to customers in other countries. CES is an international show, and one of the only places where the fact that a product isn’t coming to the United States soon hasn’t seemed to matter to exhibitors.

I’ll end this for now with a brief note on SK Telecom, the largest South Korean operator to deploy commercial 5G services in late 2018. The company sent out a press release telling visitors to check out the booth of a partner, SM Entertainment, to see “media and mobility technologies in the 5G era.” Despite plenty of 5G badging, multiple reps at the booth told me that they weren’t actually showing any 5G technology — they’re an entertainment company, they said. Display placards similarly only hinted at how 5G might touch some of the things they were showing. 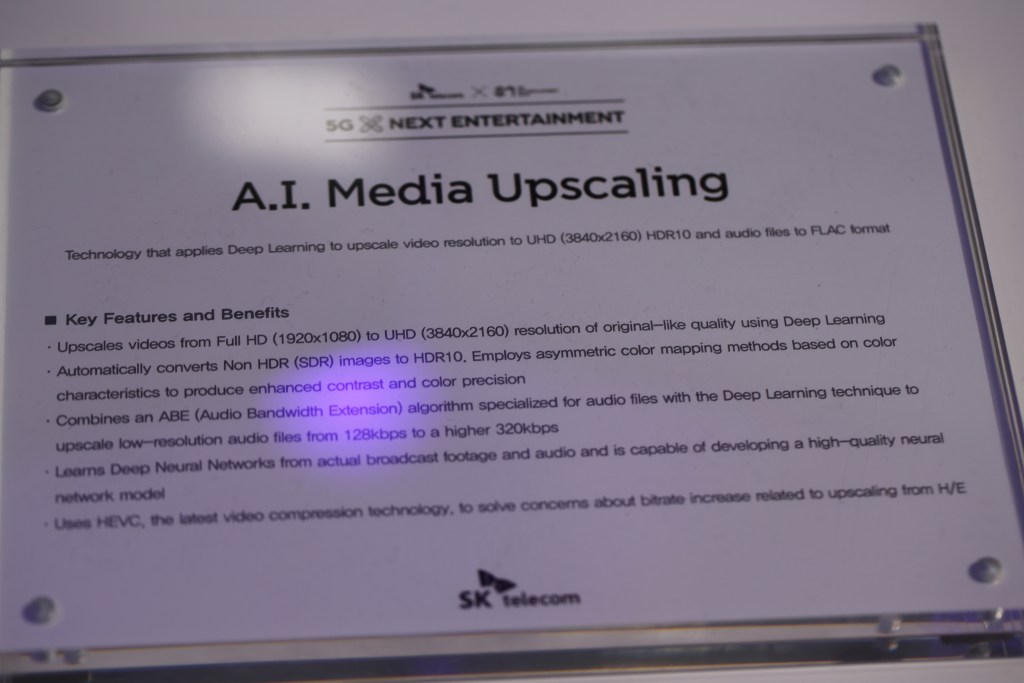 I’m planning to visit another SK Telecom booth at the show today to see if there’s any real 5G product on display. But my initial impression was that this was another example of 5G fake news — using the “5G” name to get attention for technology that isn’t strictly 5G in nature. There was a bit of that in 2018, and I expect there will be a lot more in 2019.