For years, iPhone users in India have complained that Apple services like Siri and Maps don’t work well in the country and lack some crucial features. Now Apple, which is struggling to maintain iPhone sales growth worldwide, is showing at least some signs that it’s listening to the feedback.

This week, the company quietly rolled two new features out to the Apple Maps app in India. The service now supports turn-by-turn navigation, and it also allows users to book a cab directly from within the app via Uber and Ola — the top two ride-hailing services in the country.

A number of people across several Indian cities, including New Delhi and Bengaluru, spotted the features today, and an Apple spokesperson confirmed to VentureBeat that the company has added the features to Maps in India. 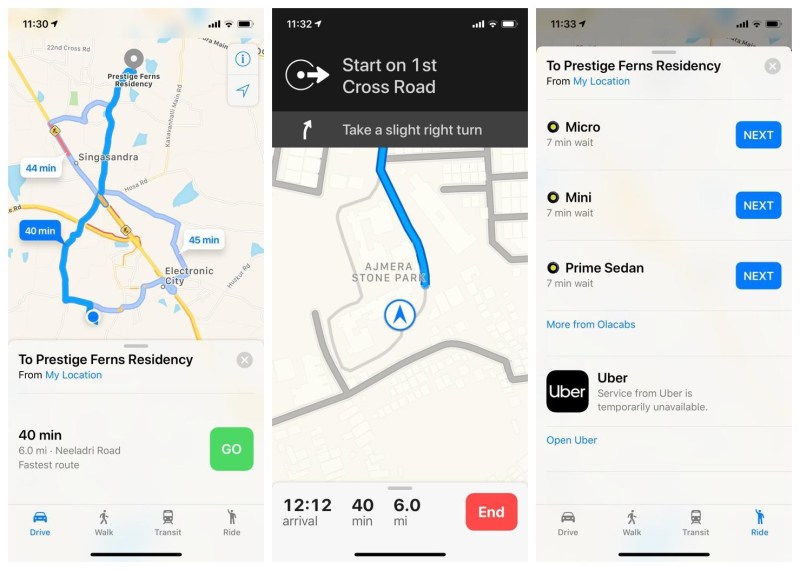 The arrival of these new features, both of which were already available in dozens of markets, comes two years after Apple opened a Maps development center in Hyderabad. The company already has thousands of people working to improve its mapping platform at the facility.

A scan through the company’s job portal shows that it has been looking to further expand the team.

Why India is important to Apple

As smartphone shipments slow globally, including in China, handset manufacturers have turned to India for new customers — and companies from Silicon Valley, China, and elsewhere are aggressively investing to improve infrastructure in the world’s second most populous nation.

In the smartphone sphere, outside companies are seeing some success in India, which has emerged as the second biggest smartphone market — and the appetite for smartphones is growing.

But Apple has struggled in India, where — as of Q3 2018 — it had just 1 percent of the smartphone market.

Apple CEO Tim Cook has reiterated during earnings calls that the company is bullish on its future in India. In an interview with CNBC this week, Cook again noted that the company hopes to eventually turn things around in the country. Last year, the company made $2 billion in revenue in India, according to filings with the local regulator.

But Apple has a lot of catching up to do. More than 90 percent of smartphones sold in India run Google’s Android mobile operating system. The search giant’s mapping service has offered features such as turn-by-turn navigation for years and has received dozens of additional, state-of-the-art features. Apple is very much playing catch-up here.