After covering live 5G demos at Qualcomm’s and Intel’s 2019 CES booths, I went to Samsung’s booth to see what sort of 5G gear might be on display. Ahead of the show, Samsung told me that it wasn’t going to have any major 5G announcements or new hardware to show, so I wasn’t expecting to see much more than a small display area.

That turned out to be correct. Only a small area of Samsung’s large Samsung City booth was devoted to 5G, and the actual hardware on display all fit on a single wall. None of the items were actually functional, except for a single device billed as the “5G Prototype Smartphone,” which was only running a video loop — and not one that in any way suggested it was using a live 5G connection, even for streaming the video.

Samsung reps on the show floor subsequently confirmed that they weren’t doing any live 5G demos and didn’t have any new announcements. Here’s what the booth and its contents looked like, regardless. 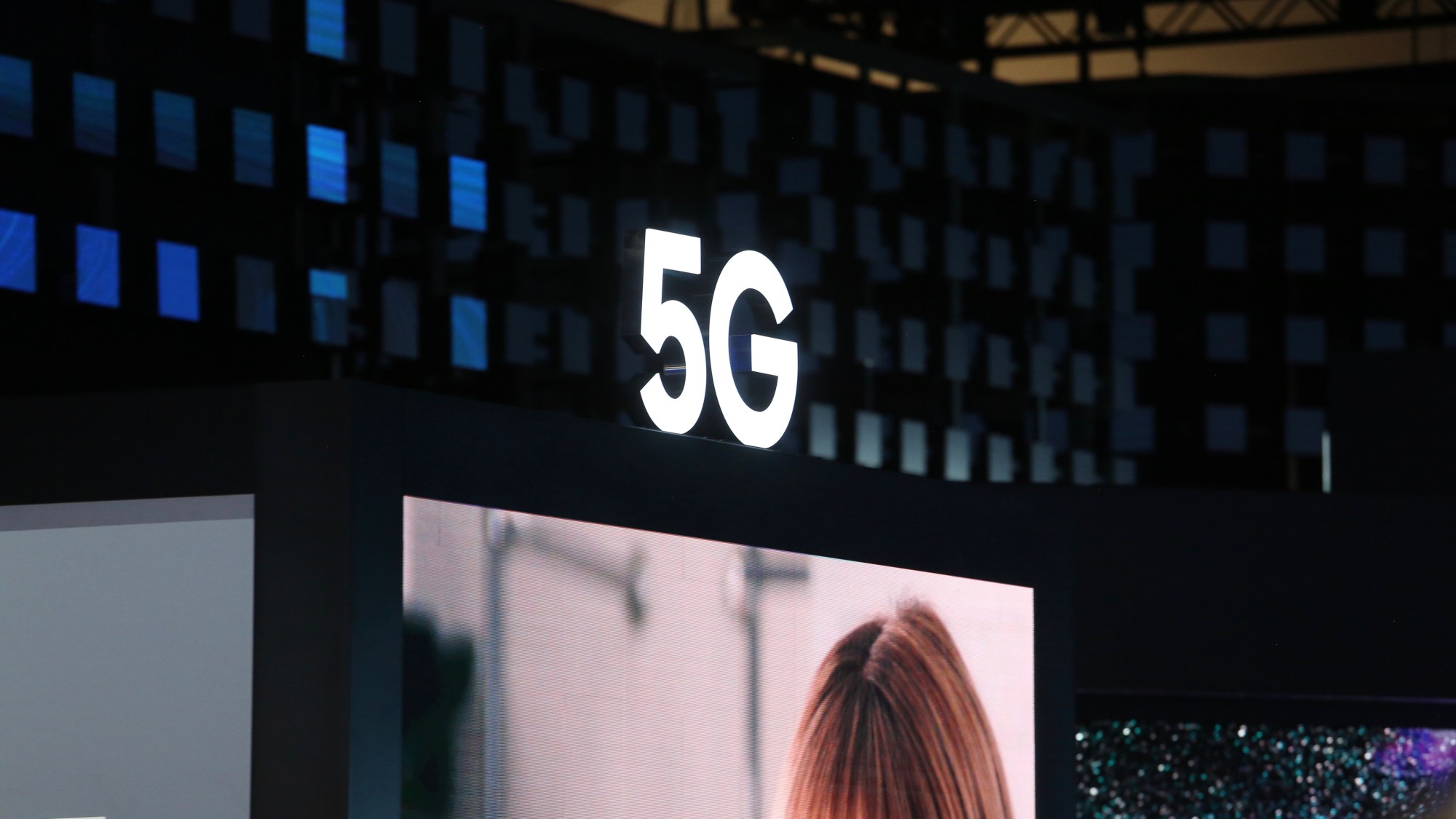 The 5G sign at Samsung’s booth was just one of many visual headings for various technologies the company is showing off at CES. You’d likely only see it if you were looking for it, given how many televisions and other products were dominating the booth. 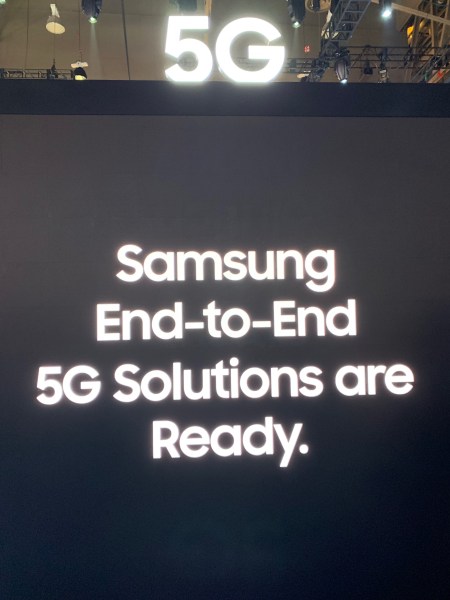 A large video screen under the 5G marker flashed slogans such as “5G is the answer” and “Samsung End-to-End 5G Solutions are Ready” at ground level as visitors walked by. It wasn’t exactly compelling stuff. 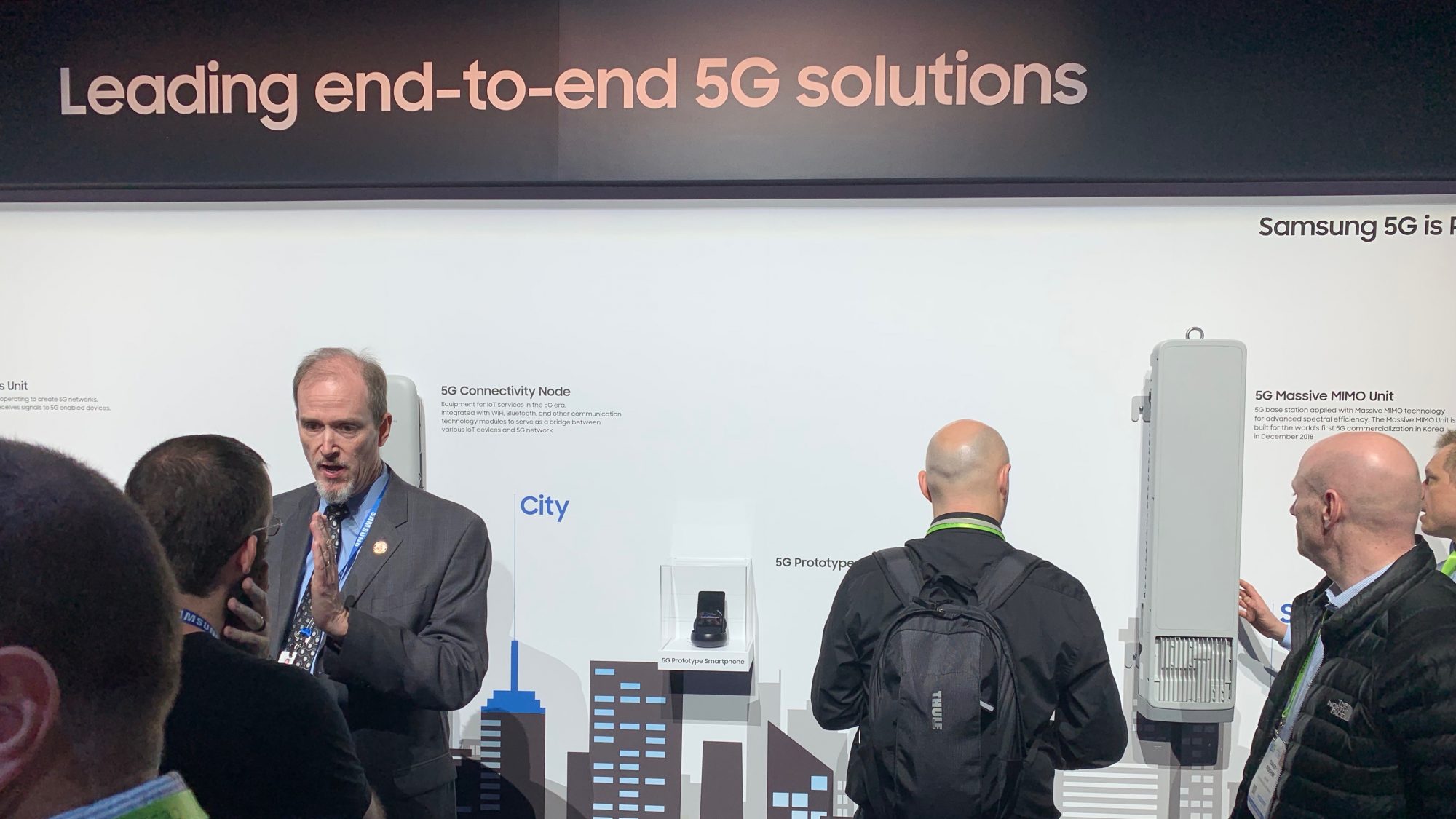 Samsung devoted a single wall to many of its 5G products, showing how various pieces of hardware work together to provide and receive 5G service. This is a critical differentiator between Samsung and many of its competitors, as the company produces everything from the tower hardware to home 5G broadband modems and portable 5G devices. The 5G Prototype Smartphone was placed in the middle, so here are some closeups of the devices from left to right. 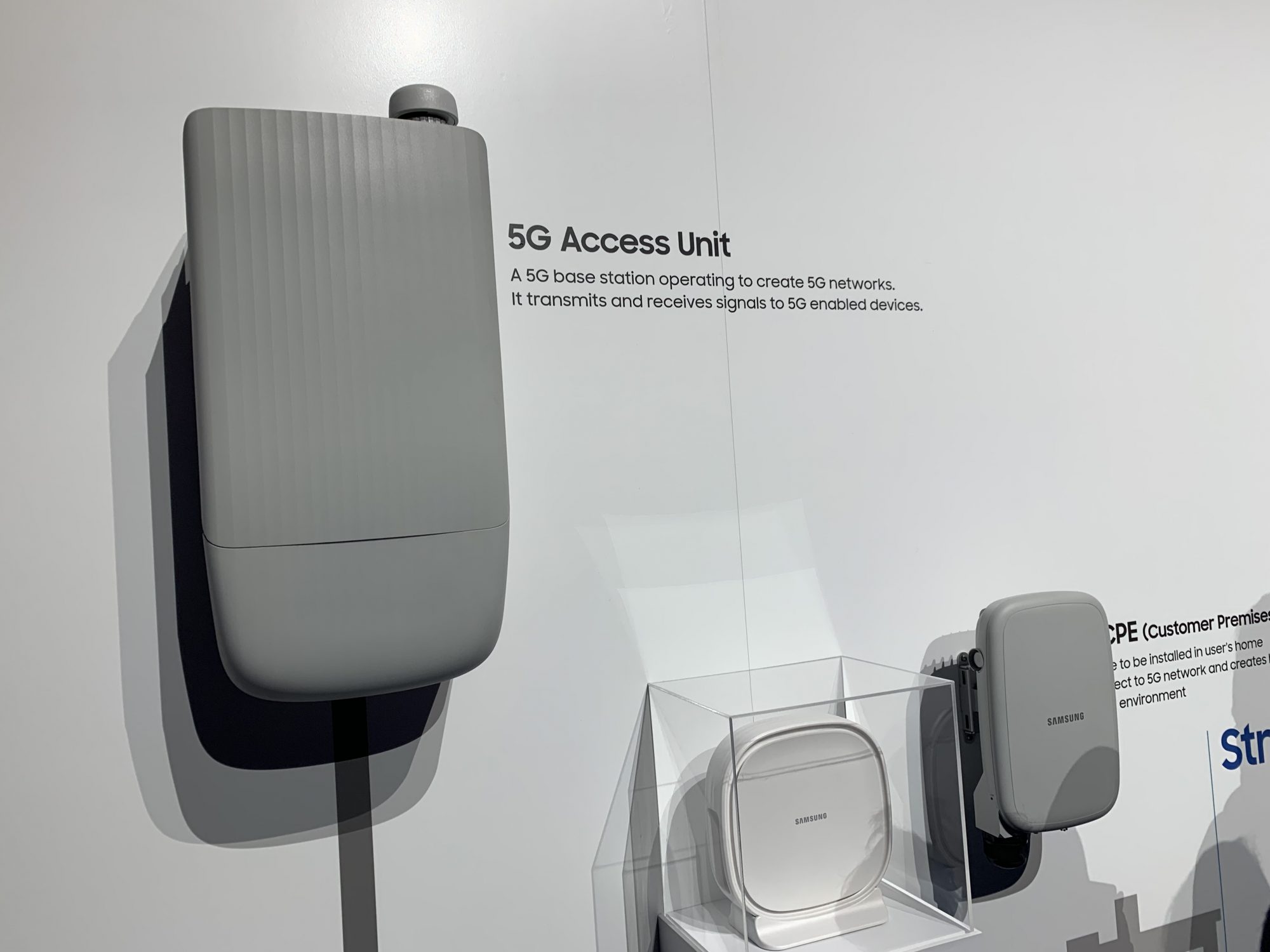 Roughly the size of a large backpack, the 5G Access Unit is what might be seen on a “small cell” installation — a base station that creates a 5G network, using radio waves to transmit and receive 5G signals. This unit would be large enough to house millimeter wave antennas, and each cell is placed at roughly 1,000-foot distances from the next cell to provide 5G service. 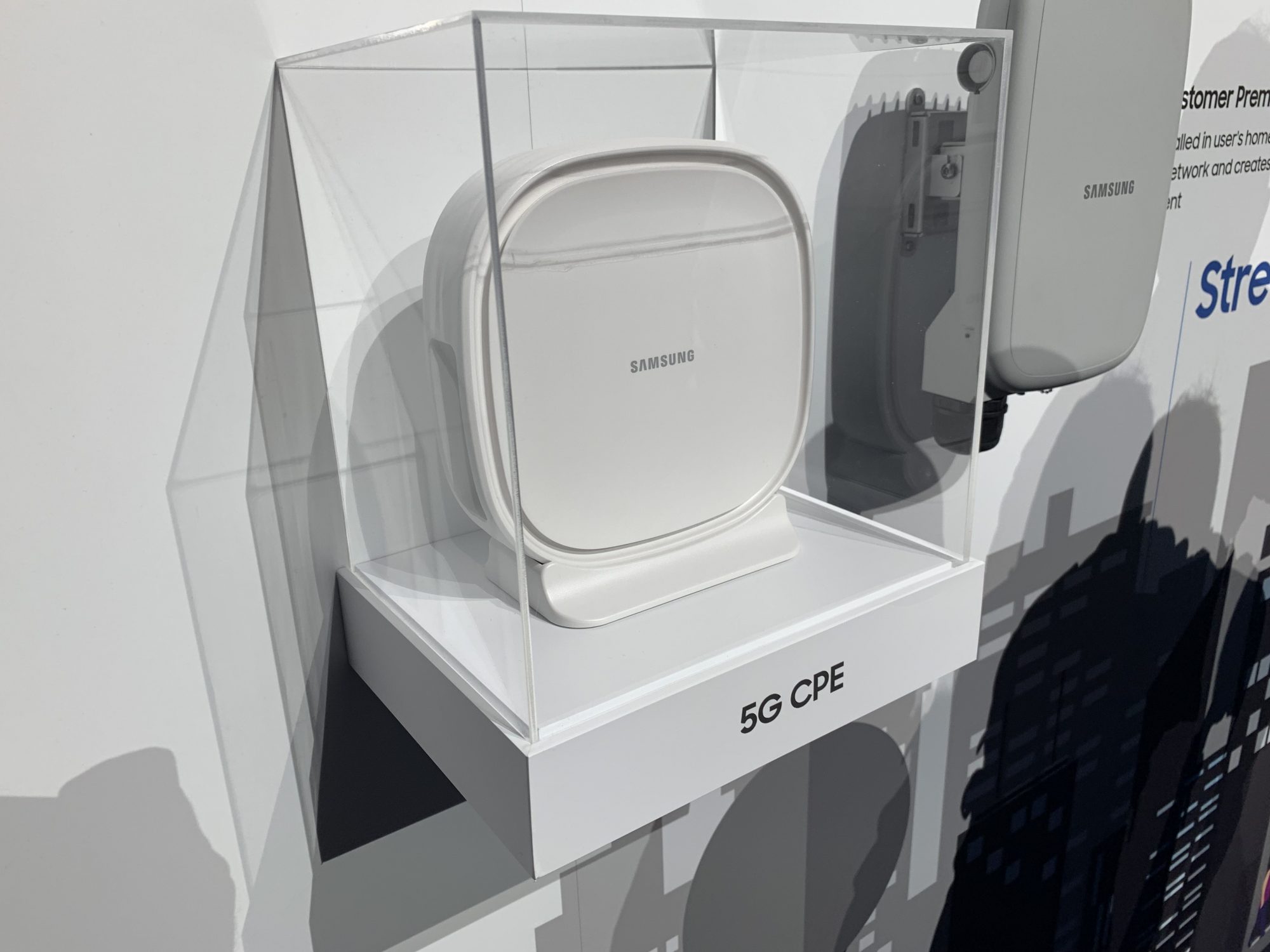 CPE stands for Consumer Premises Equipment. This 5G CPE would be the home wireless router that receives and distributes 5G service to non-5G devices in a home, such as computers, tablets, and 4G phones, typically using Wi-Fi or an ethernet connection. 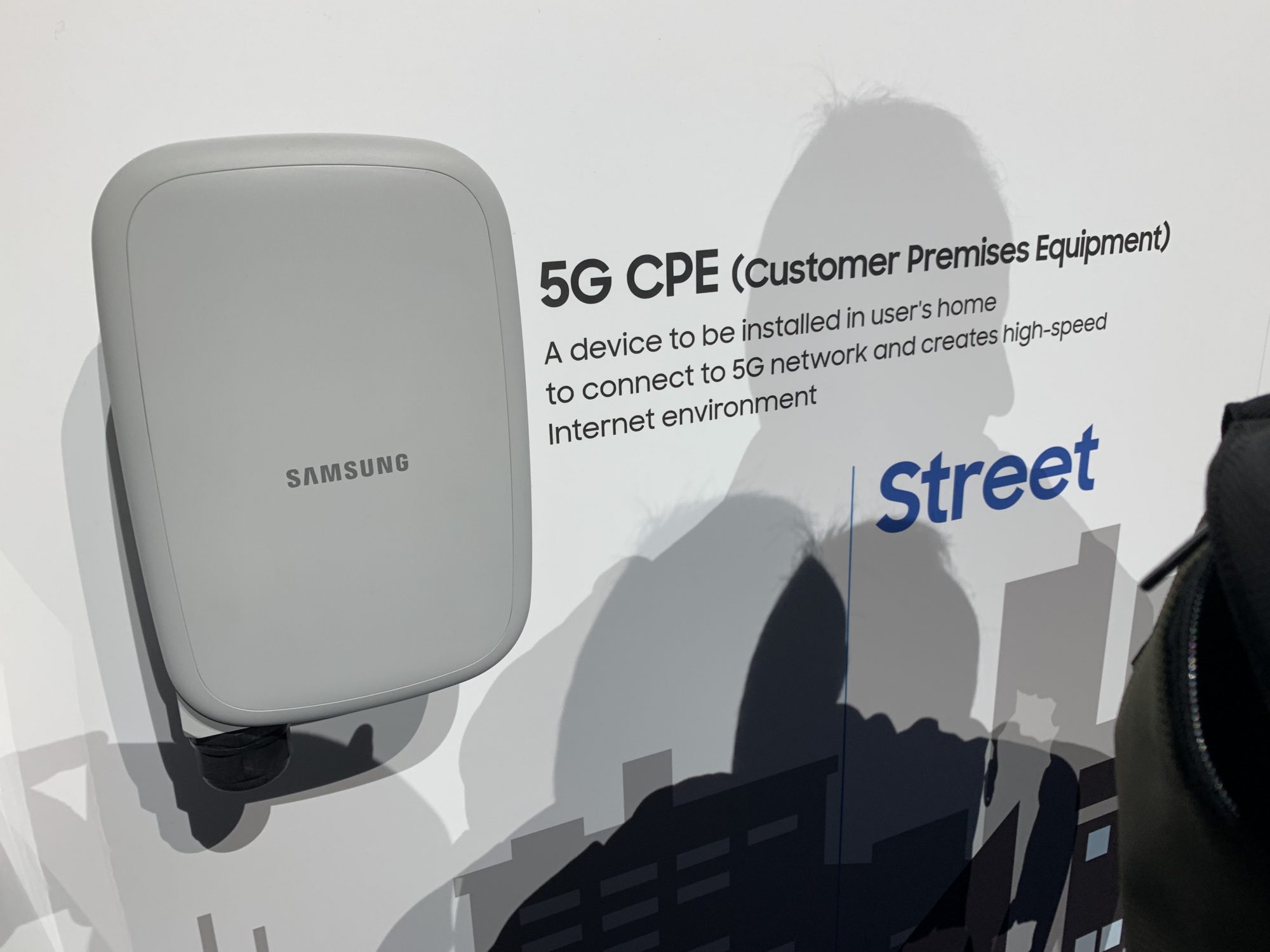 This second part of the 5G CPE is a box that will sit someplace within the home that’s close to the 5G Access Unit, initially receiving and then redistributing the signal to the wireless router. Think of it as an in-home 5G signal booster. In some locations, this component is necessary because the 5G Access Unit might not be right next to the home, or the home may have a lot of territory that needs to be covered. The hope is that these signal boosters won’t be necessary in the future as 5G Access Units become more common. 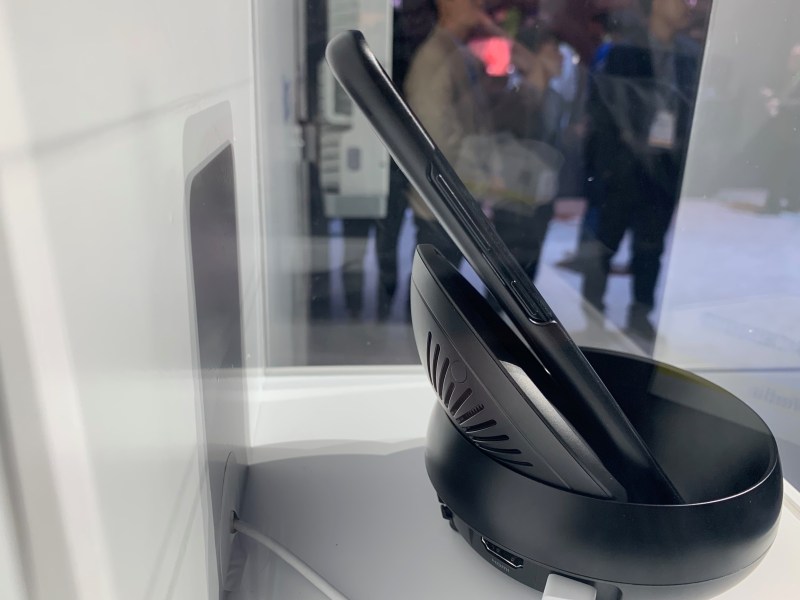 The 5G Prototype Smartphone is something of a question mark. Samsung has been using a variety of prototypes to demonstrate 5G services in South Korea and the United States, but hasn’t given any of them an official name or detailed specs. I shot this one from side angles so you can see its camera design, thickness, and buttons. 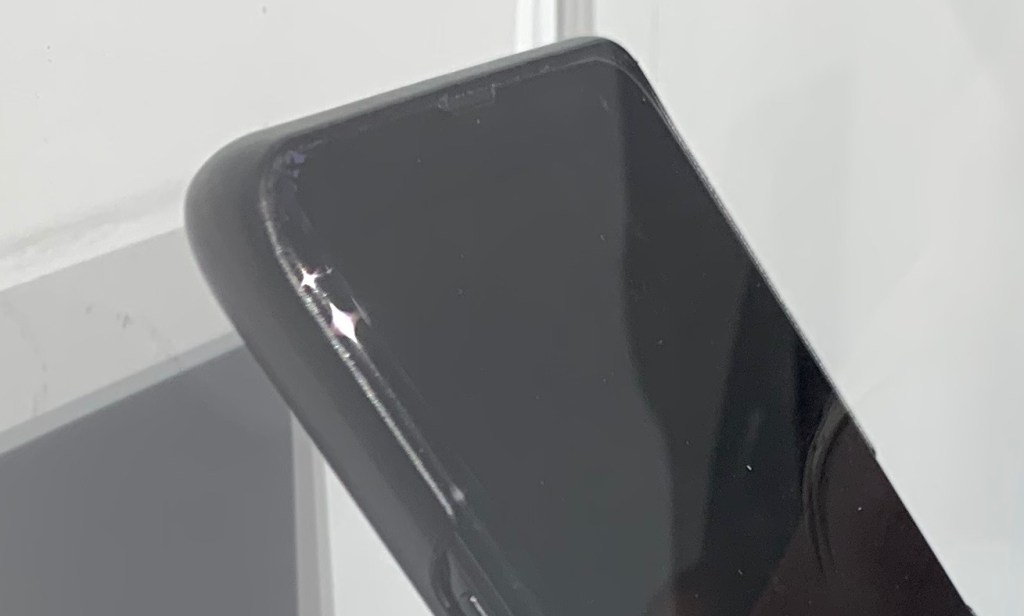 It appears to be inside a thin protective case, disguising the specifics of its design, and have a hole punch front camera in its upper right corner. If the actual phone is as thin as this one, it would be impressive and surprising to learn that it has millimeter wave capabilities — more likely than not, this is a unit with only sub-6GHz hardware, which would make it unlikely to appear on AT&T’s or Verizon’s networks.

The wall also included a plain gray box labeled 5G Connectivity Node, which was unfortunately blocked while I was visiting the booth. This box was specifically made to connect internet of things devices to 5G networks, including Wi-Fi, Bluetooth, and “other communication technology modules” so non-5G IoT modules can be connected to 5G networks. 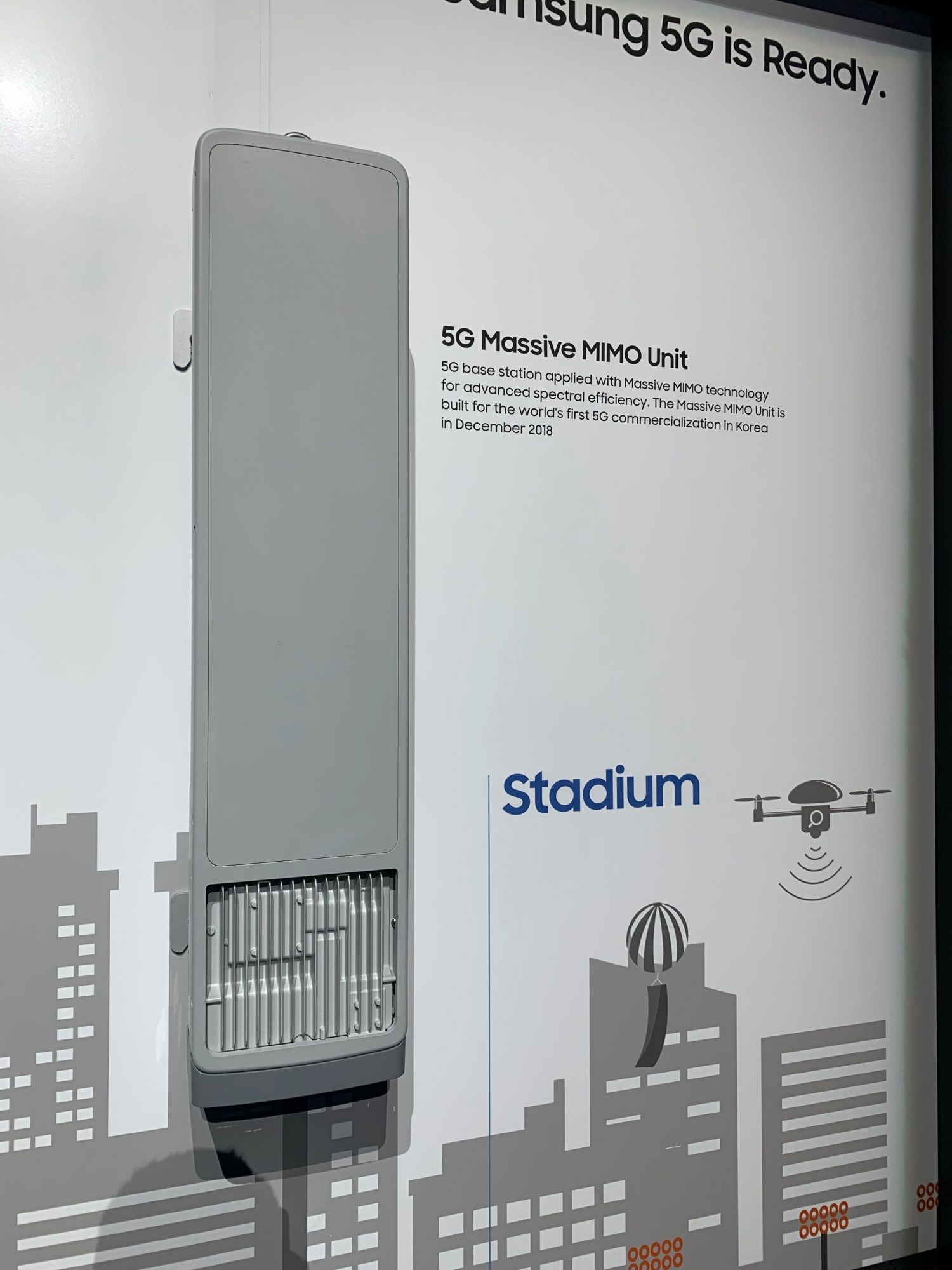 Samsung also showed off its 5G Massive MIMO Unit, a large 5G cell that has the ability to service high-demand customers with multiple antenna arrays. It was built for South Korea’s 5G deployments, and similar units are being used outside of Korea by Sprint and others. 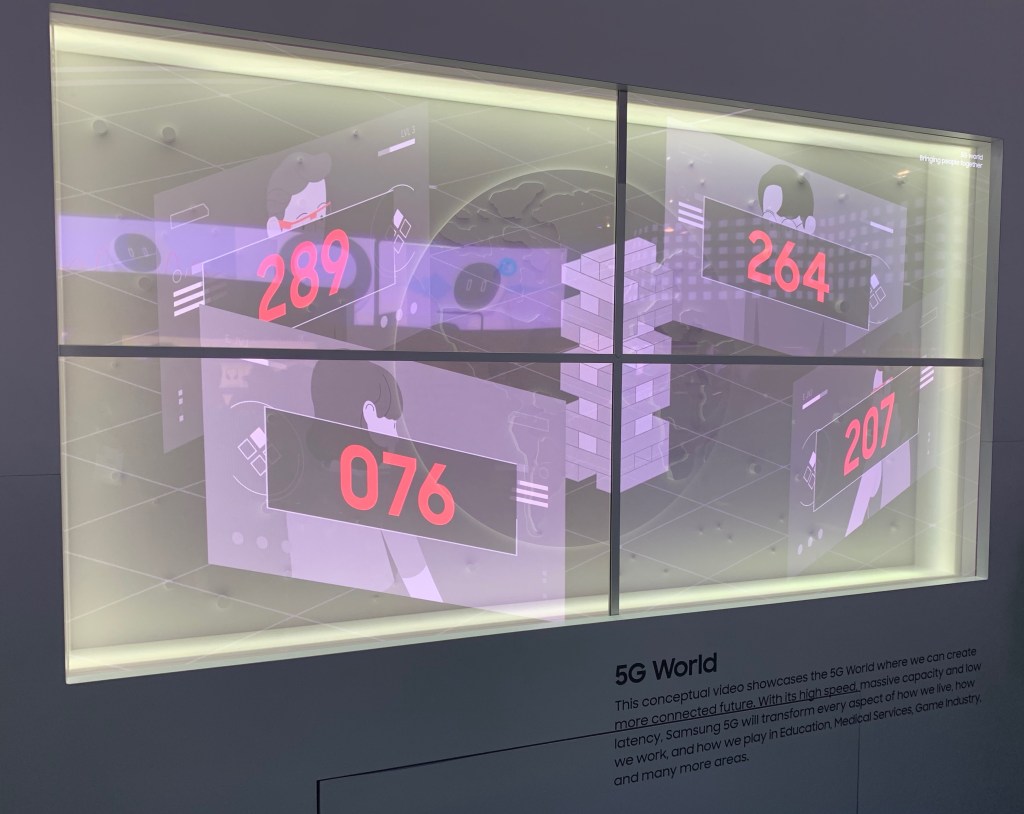 Samsung also offered two video demonstrations. The first was called 5G World, providing basic, abstract demonstrations of how high speed, massive capacity, and low latency networks will “transform every aspect of how we live, how we work, and how we play.” 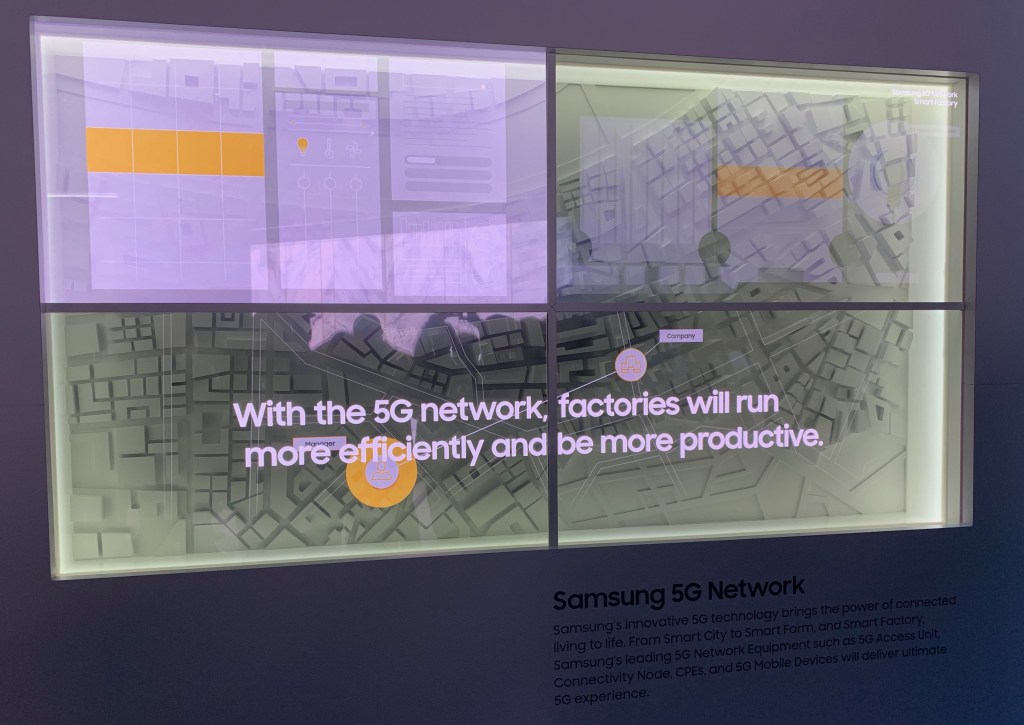 The second video, Samsung 5G Network, showed how 5G will make factories more productive, and how various types of mobile devices will connect to increasingly powerful data networks. Like 5G World, this video was projected on transparent displays, and only slightly interesting from a content standpoint.

Since this 5G future will depend at least as much on actual mobile device announcements as the tower and CPE hardware shown at CES, we’ll have plenty more to share on Samsung 5G in the weeks and months to come. The company’s next big event, Samsung Galaxy Unpacked 2019, is already scheduled for February 20 in San Francisco. The event will focus on the Galaxy S10 series, and a 5G version is expected. Stay tuned.