Before Elon Musk, Peter Thiel, and Reid Hoffman were billionaire investor-entrepreneurs, they were executives at PayPal in the 1990s. They, and over a dozen other early executives at the company, including Max Levchin, David Sacks, and Keith Rabois, have become known as the PayPal Mafia, Silicon Valley’s most famous network of serial entrepreneurs and venture capitalists.

Youtube. Tesla. SpaceX. Palantir. LinkedIn. Yelp. Members of the PayPal Mafia founded them all. The have also founded venture capital firms like Founders Fund and Valar Ventures, and joined firms including Sequoia Capital, Khosla Ventures, and Greylock Partners. They have been major investors in Facebook, Uber, Lyft, Airbnb, Square, Pinterest, Stripe, and most other unicorns Silicon Valley has produced in the past two decades.

The Mafia has inspired substantial media coverage over the years, but there has not been a thorough catalog of its investments. Using data available from Crunchbase, Dow, and media reports of investments, we have compiled what we believe to be a quite comprehensive database of Mafia investment activity. Our dataset includes the investor, the company being invested in, and the date of investment; we’ve added indicator variables to show if a company receives investments from multiple Mafia members and show the investors in common.

The Mafia is all-male and has been accused of contributing to the lack of women in the technology industry, so we hand-coded a variable for whether a company had at least one female founder to gauge the percentage of investments Mafia members made in such companies.

We believe this methodology is conservative, and that several Mafia members are probably responsible for more investments than we’ve captured here. For example, Reid Hoffman was probably responsible for more investments at Greylock Partners than just the ones in which he is named as a partner on Crunchbase. A more detailed explanation of our methodology can be found here.

Overall, we found 1,005 investments by Mafia members and affiliated VC firms into 646 companies over the period from 1995 to June 2018. We were able to identify founders for 642 of these 646 companies, finding 89 (14 percent) with at least one female founder; one startup had a founder who identifies as gender nonbinary.

To compare these numbers to the industry as a whole, a study using Crunchbase data found that, from 2009 to 2014, 15.5 percent of startups had at least one female founder. During the 2009-2014 period, 13 percent of startups the Mafia invested in had one such founder. 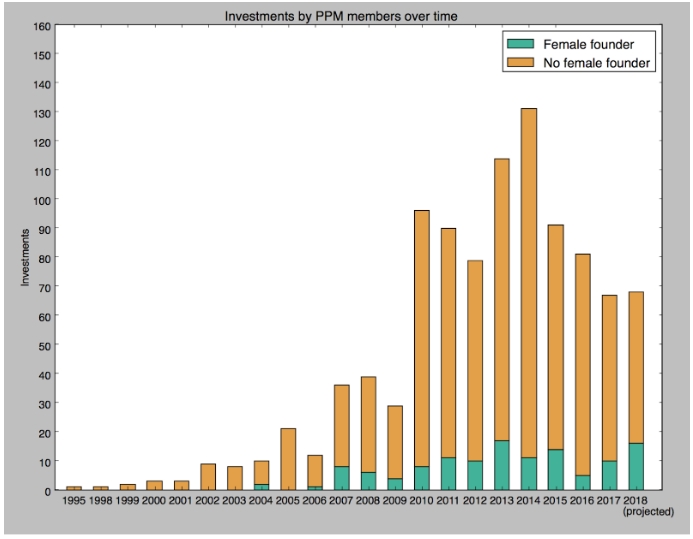 In the next figure we show the number of companies each individual Mafia member has invested in (so if a Mafia member invests in the same company multiple times, that only shows up as one observation). Peter Thiel and Scott Banister, the most prolific investors, are each responsible for investments in over 100 companies. Another half dozen Mafia members have invested in several dozen companies each.

For two of the Mafia members, Dave McClure and Reid Hoffman, more than 20 percent of the companies invested in had at least one female founder. (In 2017, McClure resigned from 500 Startups after being accused of sexual harassment and admitting to “inappropriate” advances). 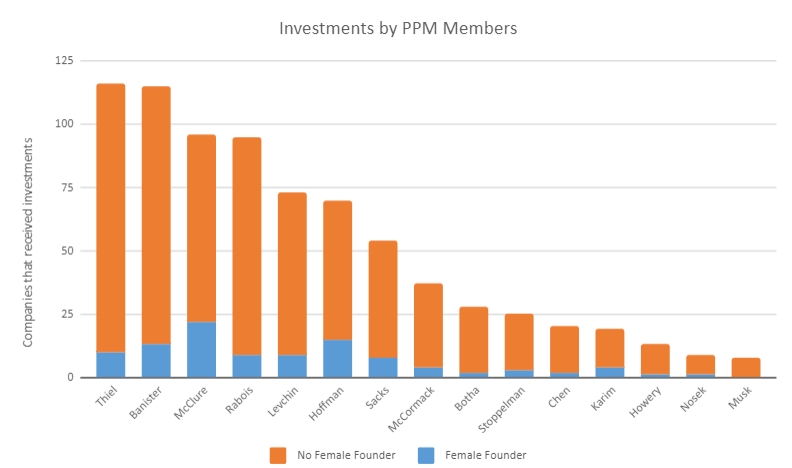 We found that 31 percent of the companies Thiel invests in also receive at least one investment from another member of the Mafia. That figure is 47 percent for Rabois, 16 percent for Hoffman, 41 percent for Levchin, 46 percent for Sacks, and 18 percent for Banister.

We found that, of the 646 companies in the dataset, 103 (16 percent) received investments from multiple Mafia members.

In the network graph below, the thickness of the line between two Mafia members represents the number of companies in which both members have made investments. The graph reveals a core network within the PayPal Mafia consisting of Sacks, Levchin, Rabois, Thiel, and Banister. 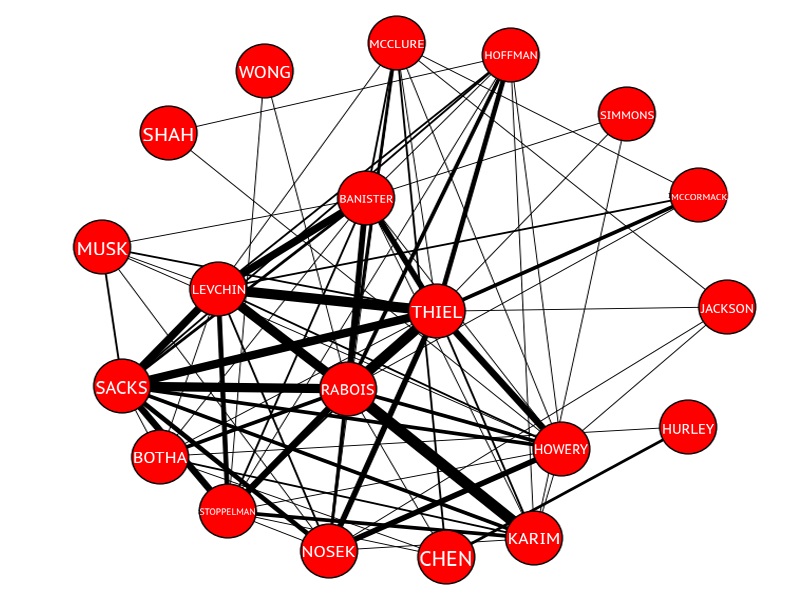 There is sometimes a temptation to think of Silicon Valley almost as an abstraction. But the PayPal Mafia network, spanning hundreds of companies and billions of dollars, is made up of actual people making observable decisions. The full dataset is here, spanning over two decades of technology history.

Andrew Granato is an economic researcher and freelance journalist.

Scy Yoon is a programmer.