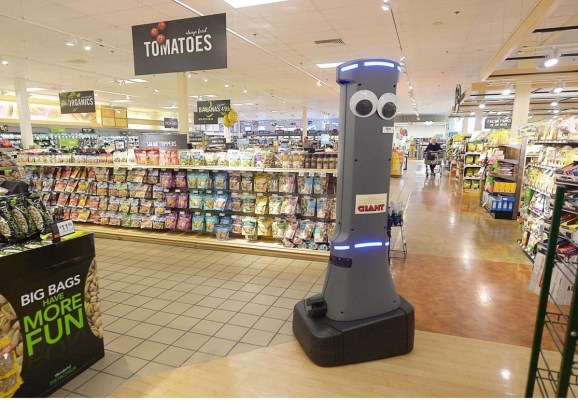 Fleets of robots will head to grocery store aisles later this year, thanks to a partnership between Kentucky-based Badger Technologies and Retail Business Services (RBS), the division of Ahold Delhaize that provides services to Food Lion, Hannaford, and other brick-and-mortar brands. The two today announced that Badger’s roving Marty bots, which identify potential safety hazards and perform other labor-saving tasks, will come to nearly 500 Giant, Martin’s, and Stop and Stop stores, following successful pilots.

The deployment — which Badger and RBS claim is one of the largest of its kind — is currently underway and will continue through the early part of 2019. Meanwhile, tests with additional Ahold Delhaize brands are ongoing in select stores.

Marty — a slim, grey robot with a wheeled black base that measures only slightly taller than an average adult male — sports colorful LED strips, a name tag, and two disarmingly cute googly eyes. It’s equipped with proximity sensors to prevent it bumping into shelves and shopping carts and cameras that scan for anything that might cause someone to slip and fall — like a spilled beverage.

The cameras’ other purpose is reading product tags to recognize when stock is running low and flagging incorrectly tagged items. In the future, Badger hopes to imbue Marty with the ability to check and report food temperatures.

Each Marty robot can clean-sweep a store about a dozen times a day, according to Badger, and most operate seven days a week on a rechargeable lithium-ion battery.

“As part of our continued focus on technology transformation, we’re pleased to support one of the most significant deployments of robotics innovation in the grocery retail industry,” said Paul Scorza, executive vice president and chief information officer for RBS. “Several companies in the grocery retail space have recently begun testing or using in-store robots — something [RBS] and the local brands we serve have been doing for some time. We’re pleased to support the [Giant and Martin’s] and Stop & Shop brands, as they now lead the industry from test to large-scale usage of robots, and to see the benefits the technology continues to drive for their businesses.”

It’s not the first partnership aimed at tackling the logistical challenges of brick-and-mortar businesses with robotics.

Bossa Nova’s machines scan shelves three times a day in Walmart stores across the country, where they provide managers with inventory updates and alert them to items that need to be restocked. U.K. supermarket chain Ocado — one of the world’s largest online-only grocery retailers — has engineered a packing system that uses computer vision to transfer goods.

There’s also Takeoff Technologies’ platform, a pick-up station with lockers, which works out of pharmacies, convenience stores, and quick-service restaurants. Not to be outdone, commerce giant Walmart partnered with Alert Innovation in August to deploy AlphaBot, an autonomous fulfillment system capable of picking and transporting the “vast majority” of grocery items.

According to Research and Markets, the retail automation sector is expected to be worth more than $18.9 billion by 2023.