Way back in March 2016, an Israeli stealth startup called Sirin Labs unveiled the premium privacy-focused Solarin smartphone. The catch? The device would cost a hefty $14,000 — somewhat outside the price range of the average consumer.

Fast-forward nearly three years, and Solarin is no more. Sirin Labs actually announced a pivot back in March 2017, revealing that it would be winding Solarin down to focus on a new mass-market device. This turned out to be a blockchain smartphone called Finney, and the company went on to raise more than $150 million through an initial coin offering (ICO) to bring the device to market.

Finney opened for preorders in November, and yesterday saw the full and official launch of the $999 Finney smartphone, which will begin shipping this week to those who had previously ordered it. Alongside this launch is a completely revamped Sirin Labs retail store — which also opened yesterday. It will not only sell Finney, but serve as a communal hub for London-based crypto enthusiasts.

A second store is scheduled to open in Tokyo, with others launching in partnership with local retailers in additional markets, including one in New York.

Sirin Labs’ decision to launch its first retail store in London is in part due to the city’s crypto community, but it is also partly down to the U.K. capital’s position as one of the main technology hubs in Europe.

“London is diverse, creative, and a thriving technology hub,” noted Sirin Labs chair Kenes Rakishev. “In 2018, London’s tech sector attracted significantly more investment than other European centers, raising more than £1.8 billion. It is the ideal first location for the Finney, the first mass-market blockchain phone in the world, to go on sale.”

The Sirin Labs retail store is located at Bruton Place, in the affluent London district of Mayfair. 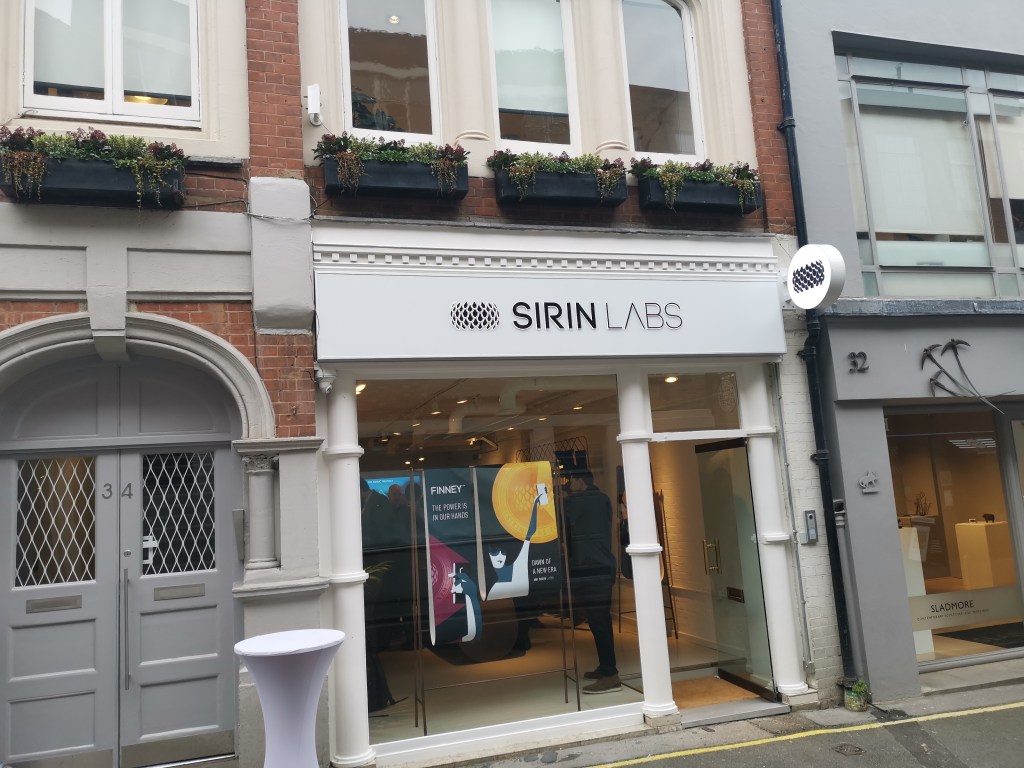 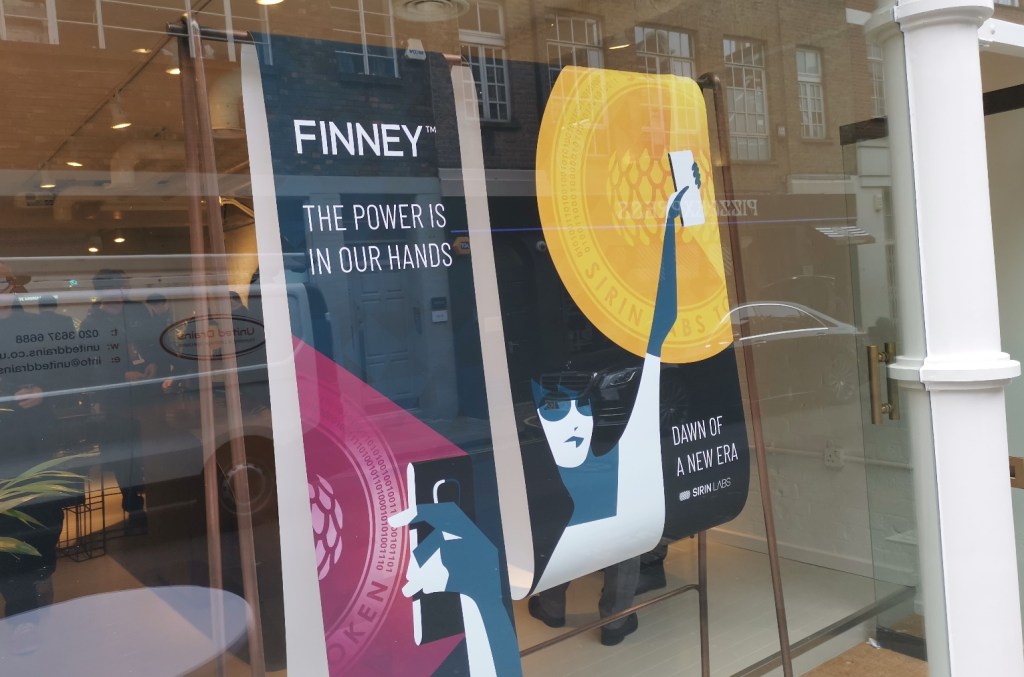 Above: Sirin Labs’ retail store for the Finney blockchain smartphone 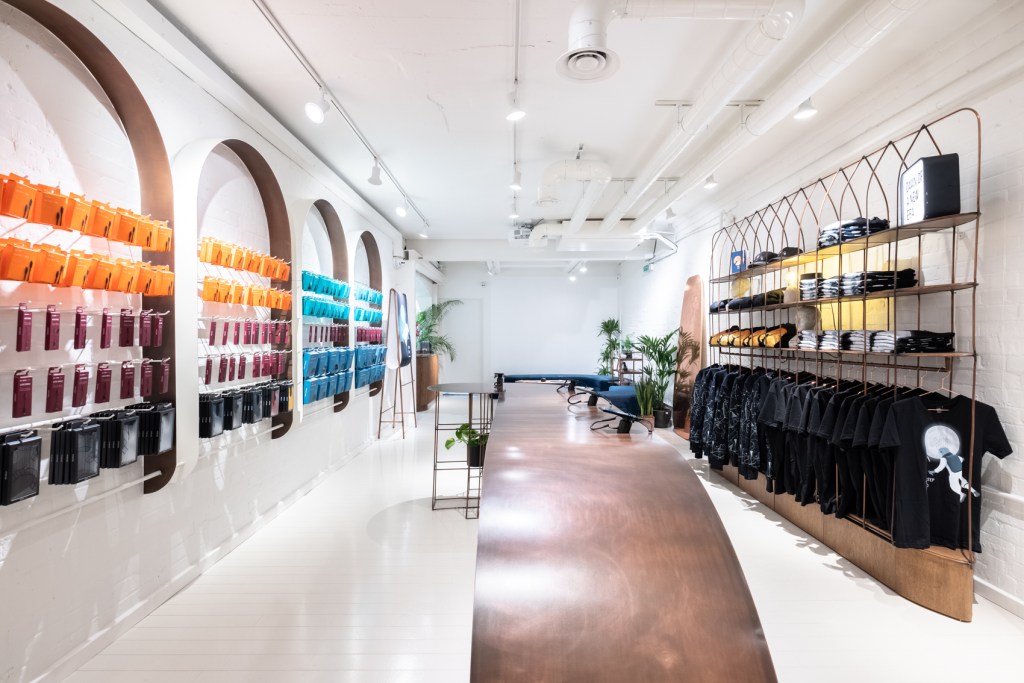 Above: Sirin Labs’ retail store will showcase (and sell) the Finney smartphone

The store will be used to showcase — and sell — the Finney smartphone. 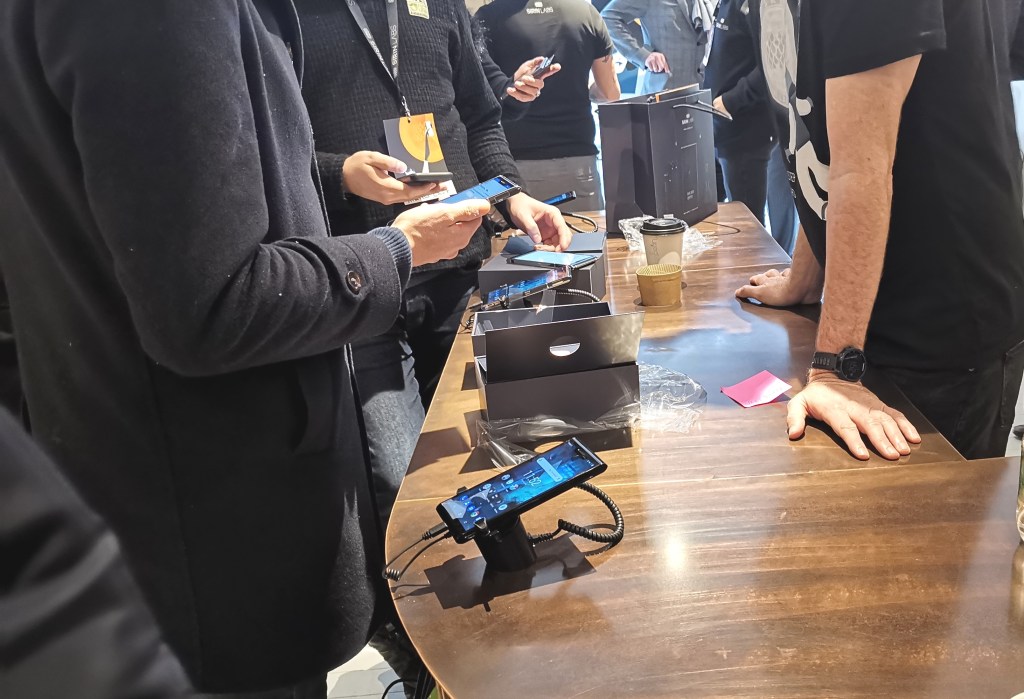 Above: Sirin Labs’ retail store will showcase (and sell) the Finney smartphone

It will also sell Sirin Labs’ own-brand smartphone accessories, such as dongles and cables … 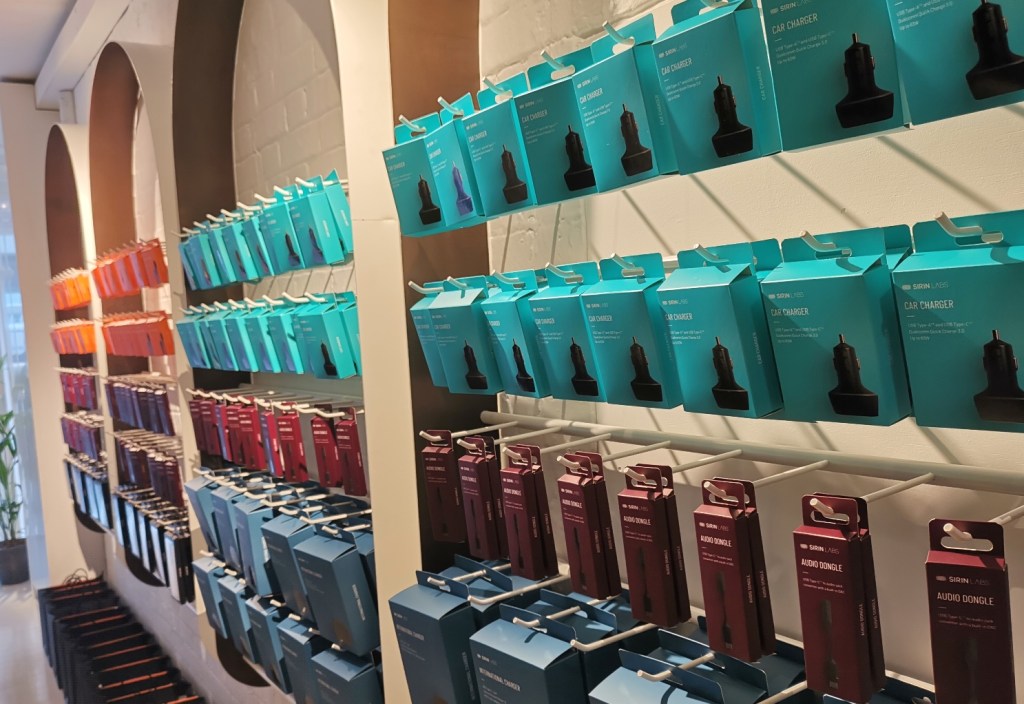 … as well as clothing, including hoodies, T-shirts, and hats. 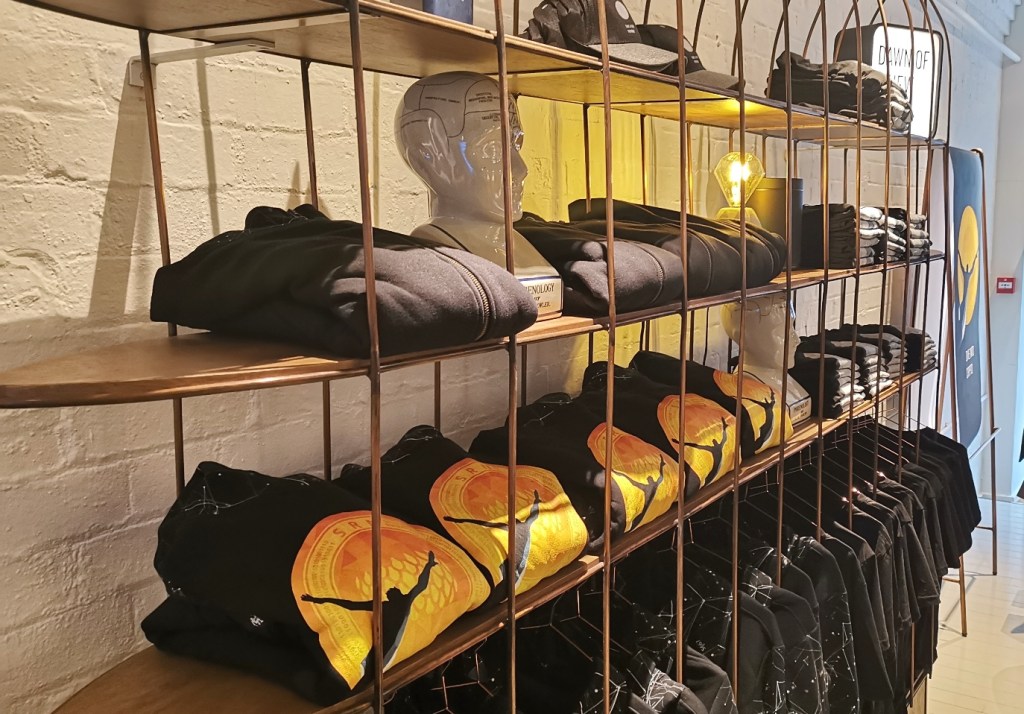 Above: Sirin Labs will sell branded clothes including hoodies and hats

While the Bitcoin cryptocurrency gave birth to blockchain, the underlying “decentralized” technology is emerging in all manner of industries, from identity verification and car-sharing to matching royalties with rightsholders on music-streaming platforms. However, blockchain is still a fledgling technology, and its predominant use cases for now remain carrying out secure and anonymous transactions online. That, effectively, is what Finney is all about.

The phone was assembled by Taiwan’s FIH Mobile, which also builds Apple’s iPhone, and it has decent specs, including the latest Snapdragon 845 processor, a 6-inch screen, 128GB of built-in storage (expandable), 6GB of RAM, a 3,280mAh battery, a rear fingerprint sensor, and 12MP/8MP front and rear cameras. The Finney’s primary purpose, however, is to handle ultra-secure transactions enabled via a built-in cold storage cryptocurrency wallet that activates whenever a little secondary “safe screen” is slid out from the rear. 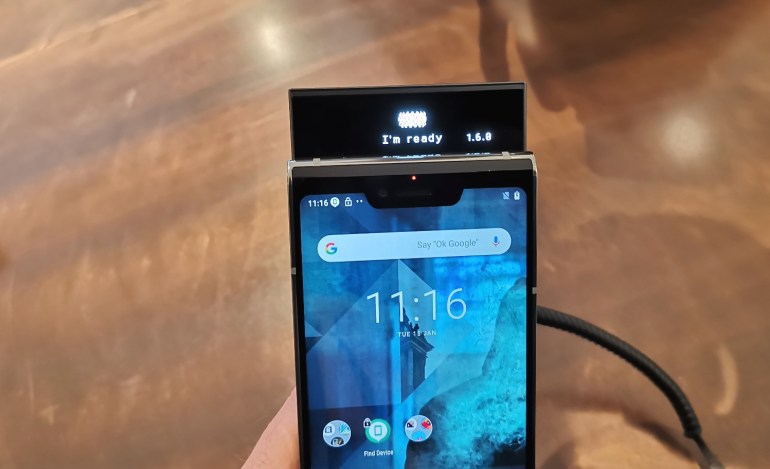 This wallet is a piece of hardware completely separate from the main device, and it’s designed to protect private keys and generate and sign blockchain transactions. It only accesses an internet-connected native wallet on the phone when a transaction is initiated by the user. 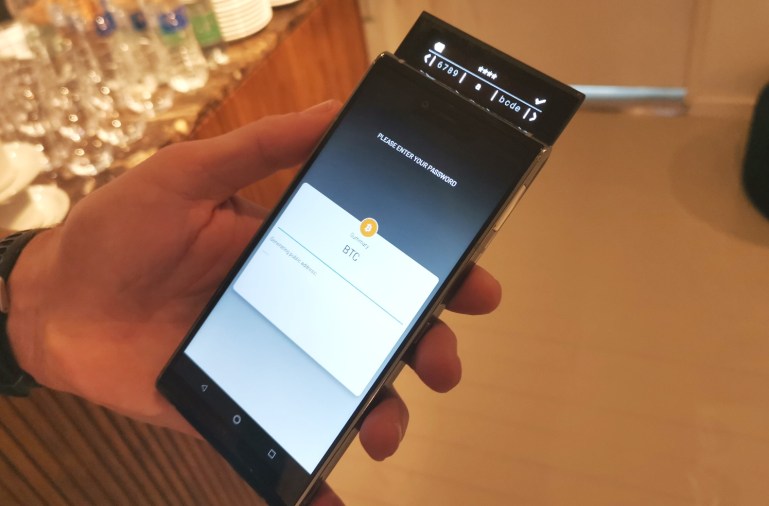 Users can create and keep multiple cryptocurrency wallets on Finney, and it also features a token conversion service (TCS) that enables users to convert between various cryptocurrencies — including Bitcoin, Ethereum, and the company’s own Sirin Labs Token (SRN). 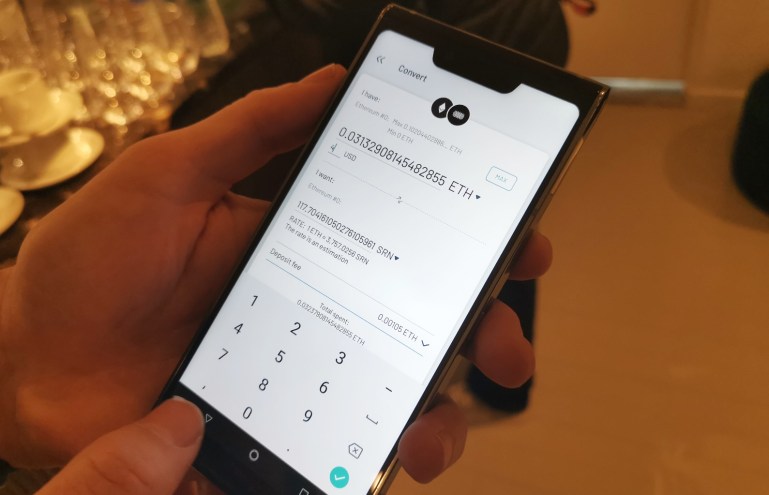 Keeping within the blockchain theme, Sirin Labs is focusing on its own special app store for decentralized apps, called “dApps.” Here, third-party cryptocurrency and blockchain app developers showcase their work, and even pay users (in cryptocurrency) for learning and interacting with their apps. 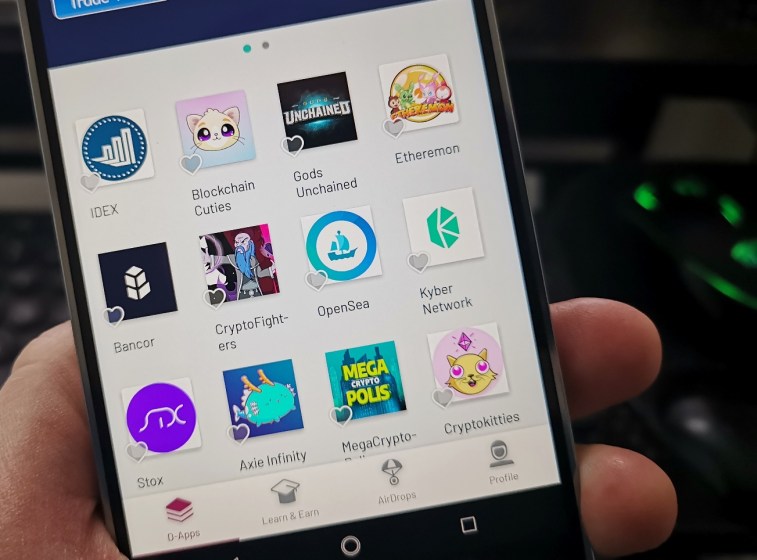 Similar to the grossly expensive Solarin phone, Finney is powered by Sirin OS, which is pitched as a super secure operating system based on Android. This is what underpins its secure technology, but it’s also what promises heightened security for the device in general — even when the cold storage wallet is not being used. Indeed, the phone sports an intrusion prevention system (IPS) that promises to protect users from both online and on-device cyber attacks, network attacks, host-based attacks, and more.

Additionally, Finney comes with a number of privacy-focused apps preinstalled — such as encrypted email service ProtonMail.

Interestingly, Sirin Labs is also in discussions to license its Sirin OS to other handset makers, but it wasn’t at liberty to reveal any specifics to VentureBeat.

Based on our brief time with the phone, Finney very much feels like a premium but niche device — it’s marketed primarily on its blockchain and cryptocurrency credentials, with little attention paid to other important facets, such as battery life, fast-charging functionality, AI-infused camera software, and all the other things people look for in their phones today.

This isn’t to say that the phone fails on those fronts, but it’s hard to know at first glance what else it offers, because everything screams blockchain. The device’s specs are a little buried on the Sirin Labs website, but it claims to fully charge from flat in two hours, and to 50 percent in half an hour. The camera software seems pretty basic and doesn’t offer any fancy filters or effects — but that’s fine; the target market for this phone has specific concerns. If you’re all about blockchain and cybersecurity, Finney could be worth a look — but if funky Sin City-style color isolation effects are your thing, you’re best looking elsewhere.

“From now on, our trusted community and our clients all over the world can go anywhere in the world with a smartphone that serves their need for top-notch security with a smartphone that has token holders in mind,” added Sirin Labs co-CEO Zvi Landau. “We’re now proudly selling a flagship device in our own store, and through our partners, [and] we’re able to provide a device that offers users the experience we envisioned when we began creating Sirin OS.”

It’s worth noting that HTC is also marketing a blockchain phone, the Exodus 1, but this is currently only available as part of an early access program that involves paying with cryptocurrency. Two blockchain phones is enough to suggest there is something bigger brewing here, but perhaps not enough to indicate that it will become a big trend in the mobile phone realm.