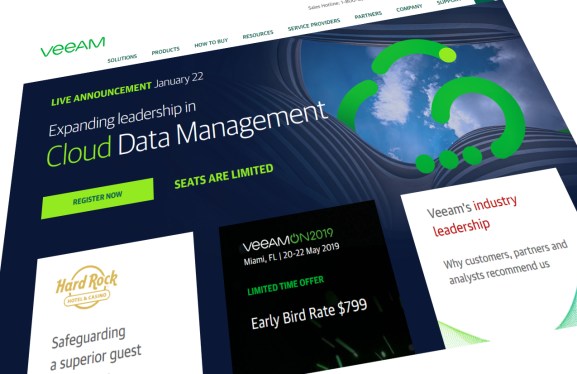 Veeam, a data management company specializing in backup and disaster recovery services for enterprises, has raised $500 million in its first tranche of institutional funding. The round was led by Insight Venture Partners, with participation from the Canada Pension Plan Investment Board (CPPIB).

Founded in 2006 by Russian entrepreneurs Ratmir Timashev and Andrei Baronov, who sold their previous software company two years earlier, Switzerland-based Veeam is one of a number of data management platforms designed to work across multiple clouds, on-premises servers, and hybrid setups. The company originally focused on on-site backup and recovery, though with the advent of cloud computing it has broadened its horizons to become a leading player in both realms.

Though Veeam has been largely self-funded since inception, the company did sell a minority stake to Insight Venture Partners in 2013 for an undisclosed sum. Veeam hasn’t revealed a valuation following this investment; however, it stated unequivocally that it has no immediate plans to go public — perhaps surprising, given not only the size of Veeam’s latest funding, but also the size and reach of its business.

Indeed, Veeam said it drew in $1 billion in sales last year, garnered from more than 320,000 customers – and it’s adding new customers at a rate of 50,000 each year. Despite that growth, Veeam told VentureBeat it’s not looking to be distracted by talk of an IPO — instead it wants to use its cash bounty to accelerate growth. This will include pushing into new markets and acquiring other companies.

The Veeam founders have a long history with Insight Venture Partners. The VC firm actually invested in their previous startup, Aelita Software, which was eventually sold to Quest Software in 2004 for $115 million.

“Over the past decade, Veeam has established itself as the premier vendor for on-premises backup and recovery software, and is now number one in the market for providing data management for public and private cloud environments,” said Insight Venture Partners’ Michael Triplett, who also sits on Veeam’s board of directors. “Only great companies like Amazon and Apple have been able to pivot into market leading positions in multiple markets, and Veeam now joins this elite group.”

Today’s news comes just a day after one of its big competitors, Rubrik, announced a $261 million raise at a $3.3 billion valuation, while last year rival Cohesity raised a $250 million tranche. The data management sphere, it’s fair to say, is hot.

It’s worth noting, however, that Veeam was at the center of a controversy last year when a researcher reportedly discovered an exposed database containing some 200 gigabytes of customer records.