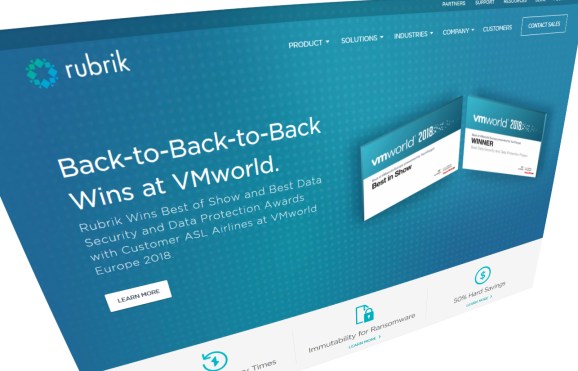 Following this investment, Rubrik is now valued at $3.3 billion — more than double the value at its $180 million series D round in 2017.

Founded out of Palo Alto in 2014, Rubrik is one of a number of data-management platforms that targets companies that store their data in public clouds, on-site servers, or through hybrid approaches. Its core selling point is that it provides a single platform for data backup and replication, instant recovery, analytics, and more.

Ultimately, Rubrik is setting out to disrupt the legacy data management market, which it touts as a $48 billion industry, citing IDC data. Rubrik counts a number of competitors in the data management sphere, such as Swiss company Veeam and San Francisco-based Cohesity, which has raised $410 million, including a $250 million tranche in June. Elsewhere, more established players such as Dell EMC, which emerged after Dell acquired EMC for $67 billion in 2016, are also among Rubrik’s competitors.

Prior to now, Rubrik had raised around $292 million, and it said that it plans to put its fresh $261 million cash injection toward “general corporate purposes” and to launch new products in 2019.

“Our previous fundraising in 2017 was focused on global expansion and increasing our reach into the enterprise market,” explained Rubrik cofounder and CEO Bipul Sinha — who is also a partner at Lightspeed Venture Partners. “This new capital will speed the introduction of exciting new products in 2019 that will solve those customer challenges and significantly expand our strategic footprint in the enterprise.”

Rubrik now counts 1,300 employees who work from three hubs in the U.S., in addition to locations in Ireland, the Netherlands, India, and Japan.