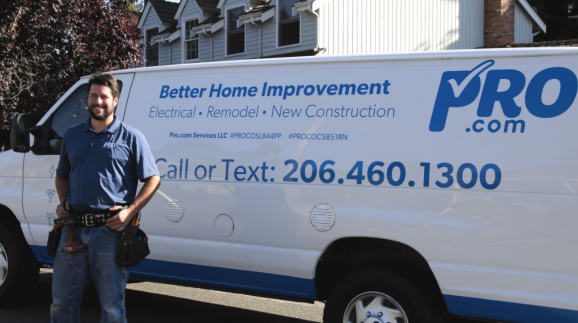 Home improvement is easier said than done, depending on the complexity of the job at hand. Finding a reliable contractor takes weeks, if you’re lucky. And if you’re not, botched jobs and construction delays can turn a straightforward remodel into a renovation from hell.

That’s where Pro.com comes in — or so goes the elevator pitch. The Seattle, Washington-based startup — a “pricing engine” that negotiates fixed-cost, detailed quotes delivered in days — today revealed that it has raised $33 million in series B financing led by WestRiver Group (WRG), Goldman Sachs, and Redfin, with participation from previous investors DFJ, Madrona Venture Group, Maveron, and Two Sigma Ventures. The fundraising comes roughly two years after Pro.com’s last venture round, and brings the total raised to $60.5 million.

In a blog post, Pro.com said it’ll use the influx of fresh cash to expand its services to Portland and other new markets.

“Many of Redfin’s customers struggle to get professional renovation services, so we know firsthand that Pro.com’s market opportunity is massive. Pro.com and Redfin share a commitment to combining technology and local, direct services to best take care of customers,” Glenn said. “We are impressed by the value proposition offered by Pro.com, and the talent, vision and humble work ethic of … the entire team.”

CEO Matt Williams cofounded Pro.com in 2013, after working for close to 12 years at Amazon as general manager in various divisions. He also served as the CEO of Digg, which was acquired by Betaworks, and was an entrepreneur in residence at Andreessen Horowitz.

Pro.com matches remodelers with general contractors, assigning a project manager who facilitates jobs and keeps in touch with the client throughout the process. After customers answer a few questions about their project and schedule a phone appointment to firm up plans, an estimate appointment is put on the books. (Quotes can be signed online or in person.) Assuming all goes well, the job commences at the agreed-upon rate, which the project manager can modify as needed (with permission). Additionally, the project managers provide estimated task completion dates along with daily updates, weekly walkthroughs, and job site photos.

A combination of on-staff specialists and “trusted subcontractors” carry out the on-site work; in each market, Pro.com employs its own carpenters, electricians, and project managers. Jobs come with a 12-month warranty.