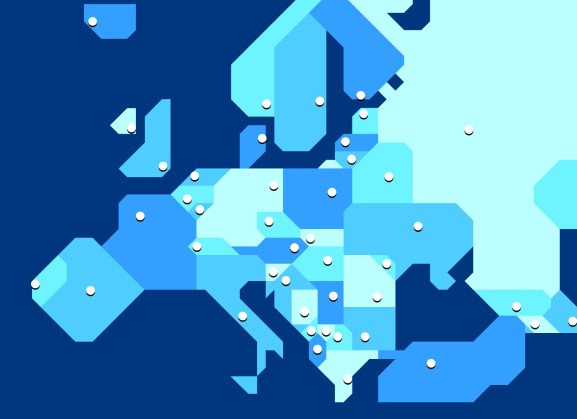 Very simplified map of Europe with states and their capital cities. Each state and each capital is on its own appropriately named layer.

Europe recorded a bumper year for venture capital (VC) investment in 2018, even though the overall number of deals fell by more than a quarter.

The findings were published as part of data and research company PitchBook’s annual European Venture Report, which revealed that a total of €20.5 billion ($23.3 billion) was invested across 3,384 deals in 2018 — this represents an increase of 4.2 percent in terms of the overall money invested. But the total number of deals dropped by 25.9 percent.

Translated: Deal sizes got bigger in 2018. Reading between the lines here, this also indicates that investors were more interested in putting in more money to companies at a later stage, rather than smaller cash injections into younger startups.

It’s worth noting here that the year-on-year comparative figures aren’t in relation to the original 2017 report, because the investment data and research firm subsequently amended the numbers with fresh data that emerged later. Additionally, we should highlight that the PitchBook report apples to all industries, not just technology, and incorporates pharmaceutical and biotech, energy, commercial services, media, and more.

PitchBook, in conjunction with London PR firm London & Partners, released separate figures for the European technology industry a few weeks ago, though it was chiefly focused on the U.K. capital. It did reveal, however, that total VC investment into European companies experienced a slight drop in 2018 — down to €11.85 billion ($13.46 billion) from the record €11.88 billion ($13.5 billion) in 2017. From this, we can extrapolate that roughly half of all European VC investments in 2018 involved technology companies.

That report also found that while investments into London-based technology companies fell by 29 percent in 2018, they still managed to attract nearly double the amount raised by their nearest counterparts in other European cities — London tech firms secured $2.3 billion last year, while Berlin and Paris companies raised $1.2 billion and $1 billion respectively.

Direct VC investments only conveys part of the story. The PitchBook report found that there was €47.5 billion ($54 billion) of exit value in 2018 — up 164.8 percent on the previous year — while the number of exits dropped 30.5 percent to 373. So this was similar to what we saw with VC funding: more money involving fewer companies.

However, it’s worth highlighting that if you take Spotify and Adyen’s respective IPOs out of the picture, exit value actually declined 4.2 percent year-on-year, which helps to illustrate the effect that just two outliers can have on the stats. London-based Farfetch was another multi-billion-dollar exit in 2018, which was valued at around $6 billion at its IPO.

“Despite declines in volume across dealmaking, exit activity and fundraising, Europe’s VC ecosystem did sustain healthy investment levels throughout 2018 as a result of increased investor focus on targeting fewer, more mature startups,” noted PitchBook analyst Cameron Stanfill. “An important milestone to note was the exit market’s ability to support three multi-billion-dollar liquidity events in 2018, as it inspires investor confidence in their ability to sponsor companies through the later stages of growth. An area that will be watched closely in 2019 is capital availability for early stage startups, with investors raising fewer, larger funds.”