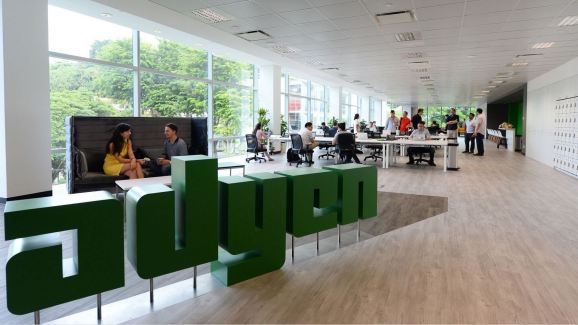 Netherlands-based Adyen’s IPO got an enthusiastic reception from investors today, as its stock surged 70 percent on the first day of trading.

The company had priced its stock at €240 ($281) per share on Tuesday, giving the company a valuation of $8.4 billion. When trading began on Euronext Amsterdam today, the price rose to €400 ($470) for a $14 billion valuation. The valuation places it behind Sweden-based Spotify’s $26 billion market after the first day of its IPO in the U.S.

One of Adyen’s earliest and biggest investors, Index Ventures, hailed the IPO as a milestone that demonstrates the increasingly global ambitions of European startups.

“Adyen is one of Europe’s biggest success stories, embracing the complexity of the payments world as an opportunity rather than a problem to overcome,” wrote Index partner Jan Hammer in a blog post. “Most importantly, it represents the power and diversity of startups that are increasingly international, and building products with a global vision.”

This has been a particularly good year for Index, which saw another one of its big bets, Sweden’s iZettle, file for an IPO and then get acquired by PayPal a few days later for $2.2 billion.

In the post, Hammer praised Adyen’s founders for their ability to not just disrupt a complex financial transaction business by making it easier, but also to attract such marquee clients as Facebook and Netflix. He noted that the company had been profitable early on, and that when they first began discussing an investment in 2011 it was with the goal of helping the company go global.

“In the end, it wasn’t the size of the round or the valuation that brought us together, but our mutual ambition to build a global business that was truly transformational,” Hammer wrote.

For Adyen’s part, the company’s CEO had promised no big celebrations to note the milestone today. Like the Swedish music streaming company, Adyen is not raising any money for itself. Rather, the listing will allow existing shareholders to cash out.

“Tomorrow, we will issue no new shares — all we will really do is welcome on board new shareholders and give existing external shareholders the flexibility that they are looking for,” Adyen CEO Pieter van der Does wrote in an email to employees Tuesday night. “We could have pursued alternative means of offering this flexibility, such as a partial sale to a private equity shareholder, or a strategic sale of the company. We decided against that as we want to build the company for the long-term. This path will allow us to do just that — as an independent company.”