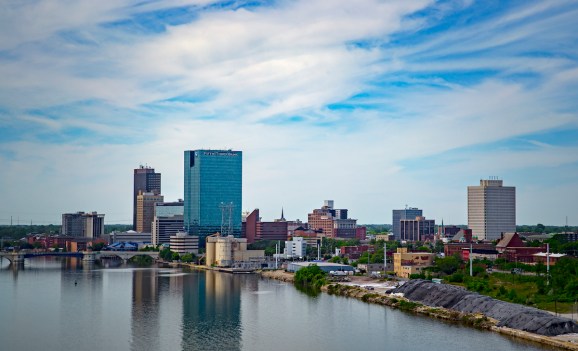 Skyline of Toledo, Ohio. Toledo is another area that Brookings thinks is most "at risk" for economic disruption due to automation.

Though experts disagree on the exact number of U.S. jobs at risk of being eliminated by automation in the coming decades, economists are already trying to determine which states and cities may be most affected.

A new report out today from the Brookings Institution determined that Rust Belt states like Indiana and Kentucky will be most “exposed” to automation. While that doesn’t mean their jobs will be automated entirely, those states are home to more occupations likely to experience wider deployment of automation in the coming decades. That said, some metro areas may prove to be more resilient than other regions.

The Brookings report used “potential for automation” values assigned to more than 800 occupations developed by McKinsey in a report released last year.

McKinsey’s scores are calculated based on what percentage of tasks that make up jobs could be “automated by 2030 or in next decades, based on currently demonstrated technologies.” Accommodation and food services jobs have the highest potential of automation, at 74 percent, followed by manufacturing. Educational occupations have one of the lowest automation occupational scores, at 27 percent.

The authors note that only 0.5 percent of the U.S. workforce hold jobs in which 100 percent of the tasks have the potential to be automated in the coming decades. But the higher the automation risk score, the more likely it is that some tasks related to that job will be automated — meaning people in those fields may see more positions consolidated and will have to be frequently retrained.

The authors then used the potential automation values assigned to each occupation to calculate an exposure to automation score for each state and metro area, based on how many jobs they have in each occupation. The states most at risk — Indiana and Kentucky — had automation potential scores upwards of 48 percent. The states with the lowest scores, New York and Massachusetts, had scores suggesting 42 percent of the tasks that make up their job mix are at risk of being automated in the coming decades.

The risk level taken on by metro areas varies more significantly — Toledo, Ohio has an automation exposure of 50 percent, while San Jose, California has one of 40 percent.

Given the outsized focus on the deployment of robots in factories, it’s not surprising that manufacturing-intensive states like Indiana and Kentucky have more occupations at risk of being disrupted by automation. However, it’s not just the occupational composition of an area that determines how greatly it will be affected by automation.

The level of education obtained by that area’s workers will also play a factor, as routine-heavy roles like clerical, retail, and service work require less education and are more likely to include tasks that can be automated. Less than a quarter of adults in Kentucky, Arkansas, Alabama, and Mississippi have a bachelor’s degree or higher, and these states had among the 10 highest automation potential scores.

“I think one of the narratives is [that] the production industries have already been automated, and we’re moving on to the service sector,” Mark Muro, senior fellow at the Brookings Institution, told VentureBeat. “And our research doesn’t show that this is exactly the case; there are still many workers in many vulnerable occupations in the production center that still matter in a lot of places.”

“The average worker in a small metro area with a population of less than 250,000 works in a job where 48 percent of current tasks are potentially automatable,” the Brookings report notes.

This high exposure for smaller metros also comes at a time when larger “superstar metros,” like San Francisco, Seattle, and Austin, have added many more tech jobs and new businesses over the past decade than have rural to mid-sized cities in the middle of the country.

This means smaller metro areas need to prepare for a double blow. Nationally, things could look alright — automation could lead to increased company earnings, and total employment could continue to rise. But the national increase in employment won’t mean anything to smaller areas that continue to lose out on new positions while their existing jobs are automated away.

The Brookings authors proposed a variety of policy solutions — from state and federal government investing more in worker retraining programs to more federal branches opening offices in rural areas to help diversify their job mix. But Muro said that the U.S. won’t really know how quickly employers will adopt automation until the next recession. He explained that research has shown employers are more likely to adopt new cost-saving technology in an economic downturn.