Augmented reality headsets are too large for mainstream users, commonly sporting design elements that look inspired by Star Trek and Star Wars props. That’s about to change: After more natural-looking AR headsets were shown at the 2019 CES, patent documents submitted by Facebook and Microsoft show that both companies are trying to make AR glasses smaller and better.

Facebook’s just-patented invention uses a new technique to fit a large-looking display inside a small headset. The invention creates a waveguide display using two parallel surfaces, potentially combining the output from multiple small projectors to create an image that both fills the eye and has a large eyebox. While similar results can be accomplished in a larger form factor, Facebook hopes to release a headset reminiscent of a standard pair of sunglasses.

On the specifications front, Facebook offers two possible applications of its invention, one with a 60-degree diagonal field of view, the other considerably wider with a 72-degree diagonal field of view. As the below graphic from UploadVR points out, each would deliver a noticeably larger augmented viewing area than Microsoft’s HoloLens and the Magic Leap One headset, which use comparatively narrower and in some cases shorter screens. 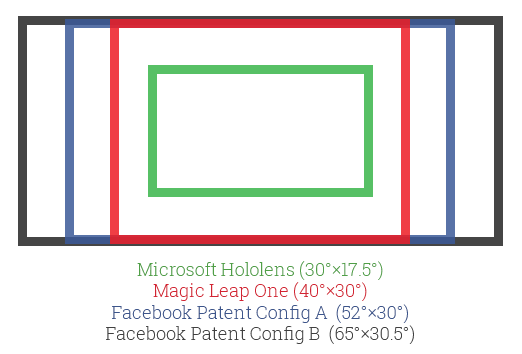 Microsoft isn’t sitting still, though. HoloLens’ display is already expected to be significantly improved upon with a second-generation HoloLens model next month. Moreover, the company’s own AR patent application suggests that it’s working towards a headset design that’s inspired less by Star Trek than by Oakley’s ill-fated Thump sunglasses, which over two generations attempted to meld an MP3 player with sports-ready eyewear.

One of the Microsoft patent drawings shows an AR headset so similar to Oakley’s Thump 2 that it could have been a direct sequel to the 2004 product, including an almost identically shaped boxy plastic frame, articulating earphones, and computing hardware nestled within enlarged ear stems.

However, the patent’s numerous sketches indicate that it would go far beyond Thump by including a camera above the nose bridge and sophisticated displays inside the lenses, enabling users to see text overlays atop real-world objects, along with a full computing screen with emails, notifications, and live enhancements of whatever the camera sees. 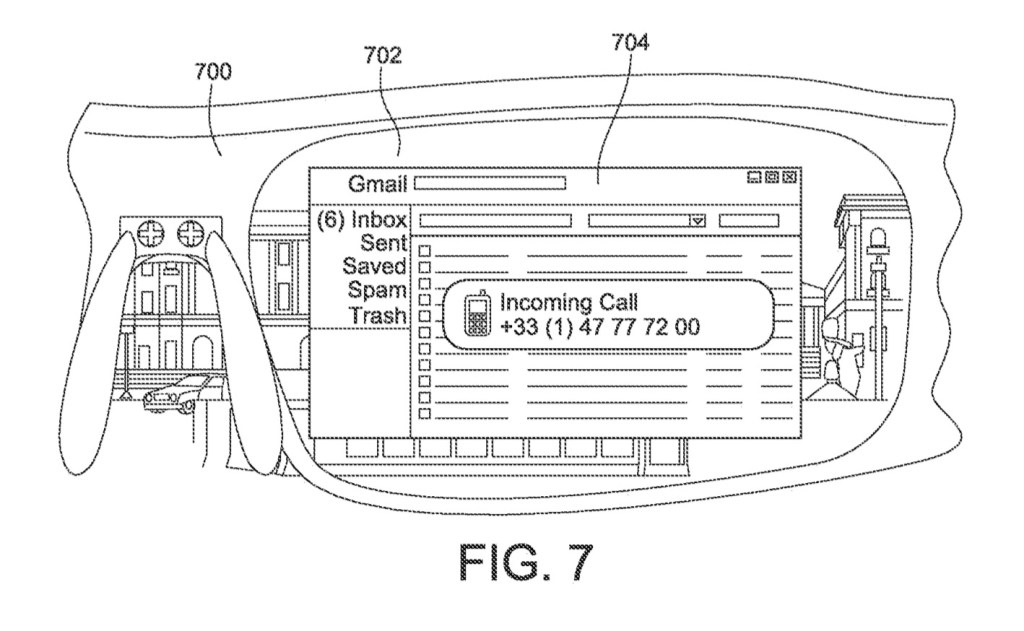 One application suggests using filters or processing to enhance the user’s vision of obscured objects, enabling viewing of scenes through dust, fog, and smoke.

While Facebook researchers have been clear in their desire to offer a “socially acceptable” AR headset with low weight and power requirements, Microsoft has been forging ahead with concepts it can offer now — even if their prices and designs relegate them to industrial and enterprise settings. Consequently, we’ll see how close Microsoft can come to its patent application’s mark when it shows HoloLens 2 next month. We may be waiting longer for Facebook’s option, however, unless it pairs up with a company such as Nreal to move its vision forward.