The crypto asset market has lost more than 85 percent of its market cap from its peak. But to me, a committed crypto entrepreneur, this is actually a good thing, and the future of crypto looks more promising than ever. The craziness started by the ICO boom in 2017 had at least one strong positive impact : It introduced crypto into the mainstream and attracted many talented people into the crypto ecosystem. The crash will continue kicking out speculators and scammers, setting up a healthy market where investors search for real value. Thinking back and looking forward, now is a good time to reflect on where real value will be created and where the biggest value will be captured.

First introduced in August 2016, the fat protocols thesis argues that in the Internet technology stack, protocols created tremendous value but nearly all that value was captured by the web applications like Google, Facebook, and Amazon built on top of those protocols. In the blockchain technology stack, however, protocols not only create tremendous value but also capture most of that value, hence the term “fat.” The thesis goes on to argue that “the market cap of the protocol always grows faster than the combined value of the applications built on top, since the success of the application layer drives further speculation at the protocol layer.” 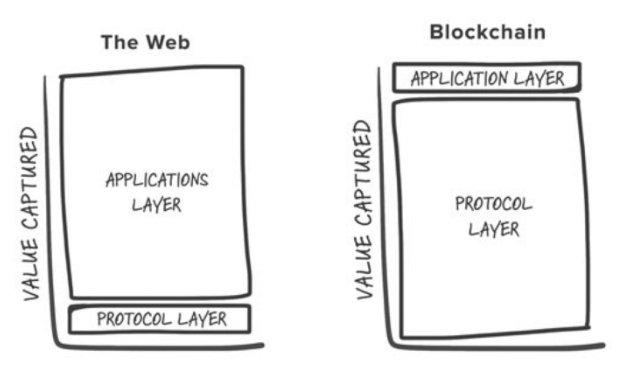 While native protocol tokens fundamentally change the business models and, via these tokens, protocols will capture most of the value they create, the fat protocols thesis falls short by highlighting the speculative value of the token as a big reason for protocols to capture value without articulating the dynamics of the token value during the bear market where speculation is gone. The protocols cannot be fat if the tokens don’t have long-term, sustainable, non-speculative value. The fat protocols thesis can be improved by analyzing the impact of token economics, which is critical in creating and capturing real value via tokens.

Ultimately, the value captured by the protocols via tokens is the sum of long-term value and speculative value, which are the outputs of two functions, Fe and Fs, which have token economics and speculation as inputs respectively. In honor of fat protocols, we can define value as “FAT.” So we have a formula:

Given that right now only a few protocols, like Bitcoin and Ethereum, are actually being used and have Fe (token economics) value, most projects’ FAT is purely Fs (speculation) value. When you’re in a bear market (as we are now), the Fs (speculation) value mostly disappears. So it should be no surprise that the value of a majority of tokens has gone to zero.

The Fe (token economics) value for protocol utility tokens is mostly driven by token monetary policy  —  namely, token supply and token demand. For example, new tokens are minted into circulation as block rewards to miners. However, every time a block is produced, the native token demand (tokens required to use the protocol), which are the transaction fees, is much smaller than the block reward in monetary value. Hence, every time a block is produced, there is a token oversupply that causes token value to go down from a token monetary policy point of view.

For tokens to appreciate in value, external (outside protocol usage) utility demand is required. For Bitcoin, which has achieved consensus at least among some crypto enthusiasts as a store of value, the external demand comes from the people who want to store their value in Bitcoin. For Ethereum, which is positioned as a developer platform, the external demand comes from protocols or applications built on top of the Ethereum. This difference in external token demand is key in understanding the value-drop from their peak during this market crash in which Bitcoin only lost about 80 percent in value while Ethereum lost 90+ percent.

After pivoting from payment currency to a store of value, Bitcoin seems to have found a product-market fit, and the external demand seems to be solid enough to hold up the value of Bitcoin. Unfortunately, protocols or applications built on top of Ethereum have not generated a lot of external demand for Ethereum (MakerDAO CDP, where Ethereum is locked, is a good example of external demand of Ethereum). In fact, most protocols have incentives to create their tokens and use those tokens to capture as much value as possible instead of passing value down to Ethereum beyond the required gas fees.

From a fat protocols thesis point of view, Bitcoin and Ethereum are the same, layer-1 infrastructure public blockchain protocols. But from a token economics point of view, they are different in that external demand in Bitcoin is more direct, whereas external demand in Ethereum is more indirect, and this subtle difference impacts the value of the protocol hugely. This opens up a very important question that isn’t discussed in the fat protocols thesis: Which layer of the blockchain protocol stack will create and capture the most value?

The Lord of the Protocols

For a protocol in the blockchain stack to capture value via its native token, it needs to create value first. As shown in the figure below, the application layer protocols create the most value in the Internet stack even though they are built on top of lower layer protocols. This is clearly demonstrated by HTTP, an application layer protocol. The HTTP layer unlocked the full value of the Internet, enabling the creation of highly valuable businesses across ecommerce (Amazon), social networking (Facebook), search (Google), video streaming (Netflix), and thousands of other categories. 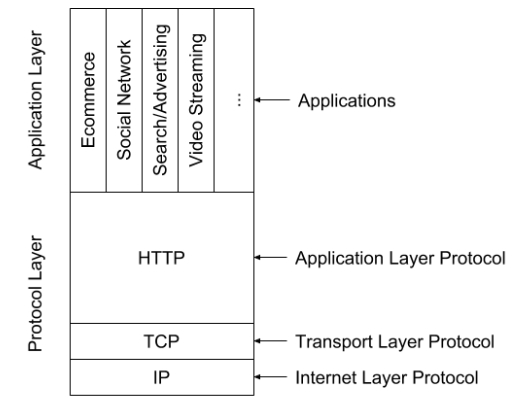 Above: Application layer protocols (especially HTTP) create most value in the Internet stack

Ultimately the middle-layer protocols in the blockchain stack will create the most value, similar to the Internet stack. Unlike the Internet, though, the invention of the token allows the protocol to capture the value created rather than simply providing a free standard upon which applications build their business models.

Each of these middle-layer protocols captures the value of the staking, commission, and other protocol usage fees, in the same way that blockchain layer protocols capture value (for example, the computational power provided by Ethereum). The economy created by that incentivized, differentiated middle-layer protocol stands to be much larger than the economy created by the more commoditized, computation-driven blockchain protocol layer. In fact, I predict that a few of these protocols tied to larger application categories like commerce and social networking will create decentralized local economies that are more than $100 trillion in size, with the tokens in those few protocols capturing massive value much bigger than any blockchain layer token, including the leading cryptocurrency, Bitcoin.

Henry He is cofounder and CEO of SesameOpen. An ex-Googler and alumnus of Nortel Networks, he is an expert in security and IP routing and a frequent speaker on token economics.