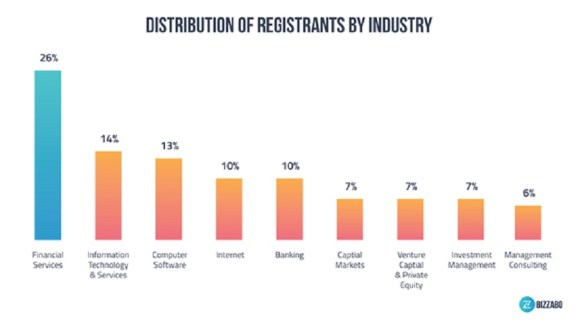 Most crypto event attendees are from the financial services industry.

Roughly 79 percent of attendees at cryptocurrency professional events are male, with only 21 percent female, according to a study of more than 100 events in 15 countries by event platform Bizzabo.

Bizzabo’s Gender Diversity & Inclusion in Events Report found that 70 percent of the speakers are also male.

Having attended a few cryptocurrency events, I’m not surprised, as most of the speakers are often male, as are the attendees. That also holds true for most tech conferences that I attend in Silicon Valley. If the technology is going to become mainstream, as just about every cryptocurrency leader I speak with wants it to, the industry would do well to change its demographics.

“Like the tech industry at large, there is a lack of gender diversity in the overall virtual currencies space,” said Alon Alroy, cofounder and chief marketing officer at Bizzabo, in a statement. “We’re seeing that reflected in the attendance for these events, as well as the speakers. One cryptocurrency conference recently featured 84 men onstage and three women. That has to change.”

About 45 percent of the registrants and attendees studied came from the U.S., making it a leader in number of attendees and registrants for these types of events. The U.K. came in second at 28 percent, followed by Belgium at 5 percent, and Canada at 3 percent.

Employees working in the finance sector drove 57 percent of all registrations for cryptocurrency events. Meanwhile, the technology sector accounted for 37 percent of all attendees. Management consulting rounded out the rest of the registrants, with just 6 percent.

“The lack of gender diversity in attendees speaks to the industries most of the registrants come from,” added Alroy. “The financial services and technology sectors have all struggled with inclusion, and that has a cascading impact on the gender mix at these events.”