Solid concrete and GPS don’t get along all that well, as New York City’s bridge and tunnel crowd can attest. Commuters, couriers, bus attendants, cabbies, and sightseers driving between the Garden State and the Big Apple — or crossing from Manhattan into the city’s outer boroughs (or vice versa)  — know all too well what a trip beneath East River or the Hudson entails: a navigational blackout. It’s an inconvenience on the best of days and an absolute nightmare when traffic’s backed up to kingdom come. For context: New York’s Lincoln Tunnel ranked eighth in the 2015 American Highway Users Alliance’s study of the country’s worst highway bottlenecks. The report found that the total annual delay in this instance exceeded 3.4 million hours and cost $87 million.

The problem is one that engineers at Waze, the Israel and Palo Alto-based company Google acquired for nearly a billion dollars in 2013 to bolster its own mapping and navigation products, think about a lot. Their solution? Wireless beacons — Waze Beacons — that emit signals to help smartphones and tablets position themselves underground. At a press conference this morning, Waze announced that it worked with New York’s Metropolitan Transportation Authority Bridges and Tunnels and the Port Authority of New York and New Jersey to bring Waze Beacons to the New York metro area. And it said that starting this afternoon the beacons are live in the Holland Tunnel, Lincoln Tunnel, Queens-Midtown Tunnel, and Hugh L. Carey (Brooklyn Battery) Tunnel.

It’s the 14th such installation of Waze Beacons to date. Others are in Jersey City, Boston, Chicago, Pittsburgh, Paris, Haifa, Rio, Florence, Oslo, and elsewhere.

“Bringing Waze Beacons to New York City marks a momentous occasion for our program,” Gil Disatnik, head of Waze Beacons, said. “This affordable, scalable, open-source technology is easy to install and can instantly help with tunnel navigation. At Waze we are focused on leveraging technology to promote road safety and make it easier for people to navigate throughout the world.”

Waze Beacons are the brainchild of Disatnik, who joined Waze in 2016. He initially envisioned the little plastic pucks, which stick to the sides of walls or the tops of roofs and polls, as Wi-Fi access points, but soon ran into a logistical problem: Devices in speeding cars struggled to latch on quickly enough to complete a handshake. So he pivoted to Bluetooth beacons — specifically, Bluetooth beacons within Google’s Eddystone ecosystem. 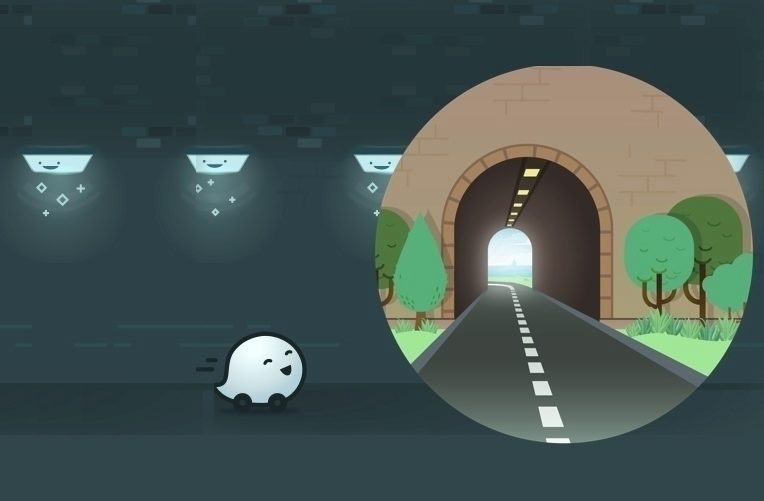 Eddystone — named after the Eddystone Lighthouse in the U.K. — is an open source project that’s hardware-agnostic. It works with iOS, Android, and any other platforms that can communicate with Bluetooth beacons. Waze’s flavor emits 10 packets a second with specific coordinates, which the company’s eponymous app and other compatible apps — including Google Maps, Apple Map, Uber, and Lyft — use to suss out altitude, mileage from the tunnel exit, and other key details.

Bluetooth has its drawbacks, of course, chief among them range. In subterranean tunnels, parking structures, and multilevel highways where Waze Beacons are installed, there’s one every 130 feet or so, which equates to a per-mile deployment cost of $1,100. (An individual beacon is about $28.50, and Waze recommends 42 beacons per mile of tunnel.) For Chicago alone, Waze supplied more than 450 along five miles. Currently, over 3,000 Waze Beacons operate on roads globally.

But Waze Beacons — using hardware engineered by Fort Lauderdale, Florida-based company Bluvision — are robust. They have a battery life that can exceed six years, and they’re IP67 water- and “environment”-resistant to any dust, debris, and detritus they might come in contact with underground.

“We are excited to bring this innovative program to our tunnels, as it will provide significant benefits to motorists by improving traffic flow and greatly enhancing the customer experience,” said Metropolitan Transportation Authority managing director Veronique Hakim. “Together with Cashless Tolling, this further underscores our commitment to modernizing our facilities so we can better serve customers now and for many years to come.”

Waze’s bread-and-butter navigation service today has more than 100 million active users, who voluntarily contribute information about route congestion, traffic delays, speed traps, potholes, and more. Waze users — or “Wazers” — can update roads, landmarks, house numbers, and other mapping information as they see fit, and other members of the community verify these additions in exchange for virtual points. Add-ons from Facebook, Foursquare, Spotify, and others offer additional functionality, like check-ins, notifications regarding nearby crime, and easy access to streaming playlists and radio stations.

Waze taps local data sources — plus databases from startups like Waycare — to show fuel prices in real time. And it works closely with local governments through is Connected Citizens Program (CCP), a free data-sharing platform used by over 200 municipalities and departments of transportation for road analysis, road planning, and emergency workforce dispatch.

Today, Waze has more than 450 employees worldwide, roughly half of whom are based in Israel. It recently launched ridesharing platform Waze Carpool in all 50 states across the U.S. following successful pilot tests in Israel, California, Texas, Washington, Massachusetts, Illinois, and Nevada.