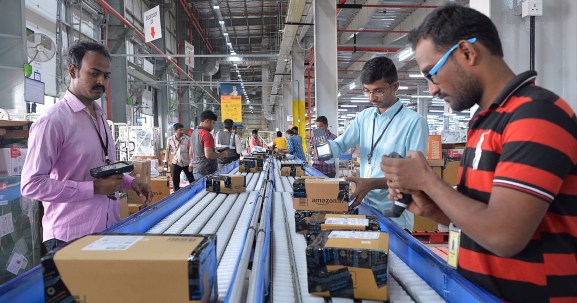 Amazon and Walmart have been dealt a big blow in India, one of their most important markets, as the local government tightens rules regarding how foreign ecommerce platforms sell goods and conduct business in the country.

Under the current laws, foreign-owned ecommerce companies are not allowed to sell directly to customers (in other words, to operate under an inventory-based model of ecommerce). Instead, they can only provide a marketplace that acts as “an information technology platform” and serves as a facilitator between “buyer and seller.”

To bypass this restriction, both Amazon and Flipkart, which sold a majority stake to Walmart last year, have acquired stakes in some of the biggest third-party sellers in the country. For instance, Amazon owns stake in parent companies of Cloudtail India and Appario Retail, while Flipkart until recently controlled WS Retail, the largest seller on its platform.

In late December, the Indian government revised the policies to close the loophole. The policies, which go into effect tomorrow, prohibit Amazon and Flipkart from selling goods from companies in which they have a stake. The two companies were hoping the Department of Industrial Policy and Promotion, the government agency that issued the revised policies, would extend the February 1 deadline. But efforts to gain more time were unsuccessful. (At around 6:50 p.m. local time – 8.20 a.m. Pacific, the government said it won’t be extending the deadline.)

“The Department had received some representations to extend the deadline of February 1, 2019 to comply with the conditions contained in the Press Note 2 of 2018 series on FDI Policy in e-Commerce issued by the Department. After due consideration, it has been decided, with the approval of the competent authority, not to extend the above deadline,” the government said in a statement today.

As a result of this, both Amazon and Flipkart are preparing to comply with the new policies, which, among other changes, means that hundreds of thousands of goods, including Amazon’s own Kindle and Echo speaker lineup, will suddenly disappear from the online sites, multiple people familiar with the companies’ thinking have said. Amazon and Flipkart have explored various options in recent weeks, including holding talks with government officials, and have alerted their merchant partners to ensure they are ready to comply with the new policies, sources said.

Commenting on DIPP’s notification today, an Amazon India spokesperson told VentureBeat, “While we remain committed to complying with all laws and regulations, we will continue to look to engage with the government to seek clarifications that help us decide our future course of action, as well as minimize the impact on our customers and sellers.” Flipkart did not respond to a request for comment. But in recent weeks, the company has warned the government that these new policies would cause “significant customer disruption.”

Above: A look at how Amazon sells the Echo Dot on its US website and its India website.

The revised policies say that Amazon, Flipkart, and any other foreign-owned player (or FDI, foreign direct investment) cannot have a single vendor purchase more than 25 percent of the inventory from the ecommerce’s business-to-business (wholesale) arm and then sell it on the same store. “Earlier, ecommerce players had a marketplace entity and a business-to-business playing entity, which would either sell on the marketplace or sell to other vendors participating in the marketplace,” Arjun Sinha, a New Delhi-based analyst and lawyer who studies policies, explained to VentureBeat.

An industry insider, speaking on condition of anonymity, said that many clauses in the policies are too ambiguous, so it would be especially challenging for Amazon and Flipkart to fully comply with them. For instance, Amazon has more than 400,000 partners in India. It would be a major pain point for the company to audit these partners’ books and ensure that they are playing fairly, the person said.

The new policies also prevent Flipkart and Amazon from striking agreements that give third-party merchants exclusive rights to sell their products in the country.

A look at the smartphone industry sheds more light on this issue. India is the fastest growing smartphone market, buoyed by Chinese vendors, many of which — including Xiaomi and OnePlus — entered the nation through partnerships with online platforms to cut overhead costs.

Smartphones sales are crucial to Amazon and Flipkart, both of which count smartphones among the top three categories for their respective businesses. OnePlus, for instance, exclusively sells its handsets online through Amazon India. The Chinese company, which dominates the premium tier of the smartphone market in India, said this week that it willingly signed that partnership with Amazon.

What is at stake?

At stake is nothing short of India’s ecommerce market, which is estimated to grow to $200 billion by 2026. Amazon has invested more than $5.5 billion in its India operations, and Walmart paid $16 billion to snag Flipkart. The amendment to the policies could significantly derail the opportunities these companies see in India. Indeed, a draft analysis from global consultant PwC, first reported by Reuters this week, slated that the new ecommerce policy could reduce online sales by $46 billion by 2022.

A representative of All India Online Vendors Association (AIOVA), a lobby group of over 30,000 online sellers, said the new policies are not the right solution to help small merchants — supposedly the rationale behind the government’s move — and accused the government of undertaking this task to appease shopkeepers and small business voters ahead of general elections.

Some of the clauses mentioned in the new policy — including an ecommerce platforms’ inability to source more than 25 percent of goods from a single vendor — have been in place for more than two years. Ecommerce players worked around these laws for years while the government turned a blind eye, the AIOVA representative said. “Why is the government, months ahead of the elections, turning attention to this now?” the spokesperson asked. Indian government officials did not respond to a request for comment.

“Government should realise their work doesn’t stop at policy making, but also requires enforcement. In [the] past, rules have not been enforced, circumvention and self certifications have led to a duopolised market. Government needs to disclose who is stopping these investigations from happening, which is leading to policy intervention,” an AIOVA spokesperson said.

But some businesses have expressed approval of the new policy. Kunal Bahl, cofounder and CEO of Snapdeal, an ecommerce company that pivoted to cater to businesses two years ago after negotiations for a merger with Flipkart fell apart, said, “Snapdeal welcomes updates to FDI policy on ecommerce. Marketplaces are meant for genuine, independent sellers, many of whom are MSMEs (micro, small, and medium-sized enterprises). These changes will enable a level playing field for all sellers, helping them leverage the reach of ecommerce.”

Retailers with a major presence in the offline market have decried the discounts Amazon and Flipkart have been offering to win customers in recent years. These are among the businesses in support of the new policy. Kishore Biyani is founder and CEO of Future Group, one of the largest brick-and-mortar retailers in India. Biyani said the new policy will force ecommerce players to rethink their entire game plan for India. “There was ambiguity in the previous policy, which some players were taking advantage of,” Biyani said in a televised interview with Indian channel ET Now. “India should always be first with these kinds of policies. Why can’t we build our own Alibaba, and Amazon?”

This sense of nationalism was also on display earlier this month when Mukesh Ambani, who is the country’s richest man and runs Reliance Retail, the largest retailer in the country, announced the company’s intention to launch an ecommerce platform to challenge Amazon and Walmart. “We have to collectively launch a new movement against data colonization. For India to succeed in this data-driven revolution, we will have to migrate the control and ownership of Indian data back to India — in other words, Indian wealth back to every Indian,” he said at an event that was attended by Prime Minister Narendra Modi.

Vijay Shekhar Sharma, founder and CEO of One97 Communications, which operates India’s largest mobile wallet app — Paytm — and also runs ecommerce arm Paytm Mall, declined to comment on the policy at a recent event in New Delhi. A spokesperson for Paytm said the company had no comment at this time.

The government, which is expected to deliver an annual budget as soon as tomorrow, reportedly risks upsetting the U.S. administration with this new hardline approach. According to Reuters, the U.S. government has expressed concerns about the new ecommerce policies. Greg Hitt, speaking on behalf of Walmart, told the outlet that the Indian government should “certainly, as you would expect, have engaged the (United States) administration on this issue.”

Update at 3:15 p.m. Pacific: Several Amazon-owned products, including select Echo smart speakers, as well as some travel bags, batteries, office supply items, and chargers under Basics brand, and some kitchen items under Presto and apparels under Shoppers Stop brands, have become unavailable on Amazon’s website.

Update at 8:20 p.m. Pacific: During the company’s earnings call today, Brian Olsavsky, CFO of Amazon, said there is still some uncertainty as to what the impact the government rule changes is going to have on the e-commerce sector in India and the company is still evaluating the situation.

“We remain committed to complying with all laws and regulations, we will. But we’re evaluating the situation. Our main issue and our main concern is trying to minimize the impact to our customers and sellers in India. We’ve built our business around price selection and convenience. We don’t think the changes help in those dimensions for both the customers in India and also the sellers.”

“We feel very good about the long-term prospects in India and doing a good job for both Indian customers and Indian sellers. The new regulations need to be interpreted, need to make sure they don’t have unintended consequences. And again, don’t think it’s necessarily consistent with better price, better selection, better convenience for the Indian customer,” he added.