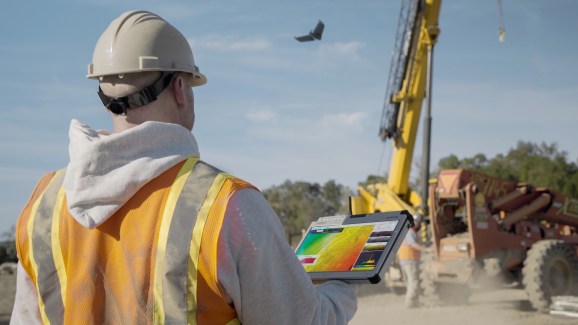 The development of Delair Aerial Intelligence has been an evolution of sorts for the company, as the platform was initially created for internal use. Over time, Delair has transformed itself from being primarily a seller of drones to also delivering software and services.

The release of Delair.ai marks another big step in that transition by providing an analytics tool customers can use directly.

“This will extract useful insight out of masses of data,” said CEO Michael de Lagarde. “It’s very important to provide these industries with an end-to-end solution that really solves a use case. That is what gives a lot of added value to the customer.”

Based in France, Delair is best known for its fixed-wing commercial drones that have become increasingly popular in industries such as utilities, mining, construction, and agriculture. The drones are able fly beyond the line of sight, giving them long ranges and the ability to collect large amounts of data.

But that presents a new challenge — how to manage the vast amount of data. While the company has offered some data analytics in the past, the release of the new platform is aimed at giving customers even greater access and control over that information, de Lagarde said.

The cloud-based platform receives data directly from drones, as well as drawing on other visual data to create more complete views and improve real-time analysis. As the platform is designed to deliver models in real time, de Lagarde said the AI component is critical to creating 2D and 3D models that are detailed enough to help customers make rapid decisions.

The Delair platform can also be accessed through various devices across a company, allowing for greater collaboration and discussion about what the data means and what to do about it.

While Delair has not turned its back on the business of selling drones, the software and analytics side of the company has been growing even faster.

This led to a major partnership with Intel that was announced in September 2017. The companies said at the time that Delair would become the lead partner for the Intel Insight Platform. Essentially, Delair’s drone software program would be sold by Intel as a white label service and be cobranded between the two companies.

That tie-up was followed last September by an announcement that Intel had made an eight-figure investment in Delair to further develop its analytics tools.

This latest product release represents another pivotal moment for the company.

“The history of the company is hardware, but from very early on we’ve been working on the software side of the business,” de Lagarde said. “Now we believe the platform has reached a level where it can be used by customers. So this is a very interesting moment in the maturity of Delair.”