Taking into account the estimated five billion people with mobile devices around the world, the percentage of adults who own smartphones is higher in South Korea than in any other advanced economy (95 percent), including Israel (88 percent) and the Netherlands (87 percent). (The U.S. ranks sixth on the list with 81 percent, tied with Australia and just ahead of Spain.) Only 49 percent of people in developing countries use social media. And 50 percent or more of people in more than a dozen emerging economies now regularly browse the web.

Those stats come courtesy the Pew Research Center, which today published the latest in a series of studies concerning internet, social media, and mobile phone trends. More than 30,133 people in 27 countries responded for the Spring 2018 Global Attitudes Survey, and while a few of the results don’t tread new ground — such as the fact that social media usage is on the rise globally — others, like the strong correlation between education and social media usage, are more than a little surprising.

People in the U.S., Canada, U.K., and other developed economies are more likely to have phones than people in emerging countries, Pew found — a median of 76 percent compared with 45 percent. That said, across the nine developing nations surveyed, smartphone ownership increased in eight — a remarkable shift considering that in 2015, roughly 27 percent of people in those countries owned a smartphone. In South African alone, the portion of people who own smartphones grew from 37 percent to 60 percent, while in Brazil, it quadrupled to 60 percent.

Still, emerging economies trailed advanced economies overall when it came to smartphone ownership. In the former, rates ranged from a low of 24 percent in India to a high of 60 percent in Brazil and South Africa, compared with 86 percent in countries such as Sweden.

Phone ownership varied widely by geography — even in developed countries. While around 90 percent of South Koreans, Israelis, and Dutch people told Pew they had a smartphone, rates were closer to 60 percent in nations like Poland, Russia, and Greece. Meanwhile, in emerging economies, ownership rates ranged from highs of 60 percent in South Africa and Brazil to around 40 percent in Indonesia, Kenya, and Nigeria.

Perhaps unsurprisingly, young people — folks under the age of 35 — were much more likely to have smartphones, access the internet, and use social media than older populations in every country Pew surveyed. (In Russia, only a quarter of adults 50 and older own a smartphone.) But the age gap appears to be narrowing. Nine in 10 Americans ages 34 and under report owning a smartphone since 2015, while ownership among the 50-and-older crowd rose from 53 percent to 67 percent over the same period. And in Germany, ownership among those ages 50 and above rose from 40 percent in 2015 to 64 percent in 2018.

That wasn’t necessarily true in emerging economies. In Mexico, 29 percent of 18- to 34-year-olds reported owning smartphones in 2013 compared with 7 percent of Mexicans ages 50 and older, and although smartphone ownership jumped to roughly two-thirds of young Mexicans by 2018, it remained at just 30 percent among those ages 50 and above.

Internet usage is nearly universal in most of the advanced economies surveyed. According to Pew, 90 percent of respondents in the United States, Sweden, Australia, the Netherlands, Israel, and South Korea reported regularly accessing the web, while 50 percent or more people in all developing countries but India reported the same. Furthermore, usage grew rapidly in emerging economies —  from 45 percent and 34 percent in Mexico and the Philippines, respectively, to 73 percent and 66 percent. 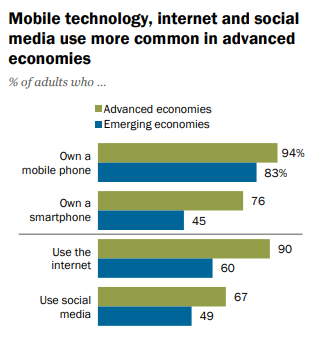 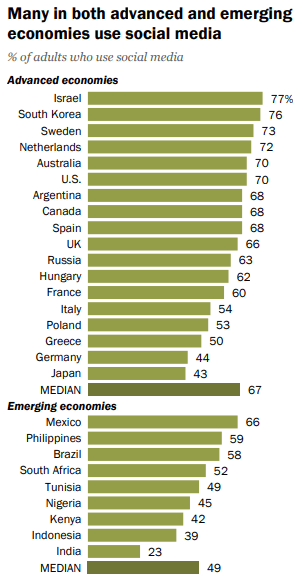 The role of education and gender

Better-educated and higher-income people are more likely to use the internet than people with lower levels of education or income, Pew found.

Divisions in education cut across internet usage: For example, 65 percent of more-educated Nigerians use the internet compared with just 12 percent of those with less schooling.

In most countries, gender wasn’t a strong predictor of technology adoption. But the opposite was true in India, where men (34 percent) were much more likely than women (15 percent) to own smartphones. India’s gender gap appears to be growing, moreover — it’s 10 points wider than it was just five years ago, when 16 percent and 7 percent of men and women reported owning smartphones, respectively.