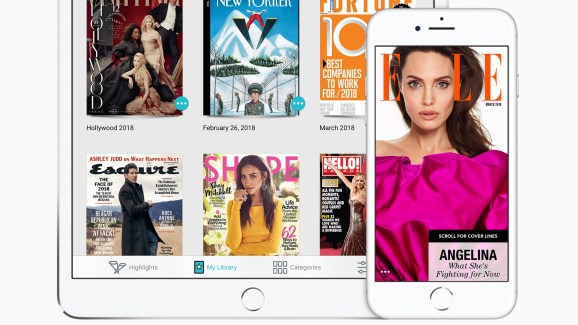 It’s no surprise that Apple’s News app proved successful after arriving preinstalled on iOS devices and Macs, reaching over 85 million readers in the three territories where it’s available. Equally unsurprising: Apple is once again reportedly upsetting news organizations with a plan to take too big a cut of their subscription revenues, and to offer too little data on subscribers.

The company has been expected to offer a subscription tier in the News app for roughly a year. After acquiring a magazine subscription service called Texture last March, Apple executives suggested that they would have something to announce around the same time this year. Now the Wall Street Journal reports that Apple will price its “Netflix for news” all-you-can-read subscription service at about $10 per month, keeping around half of the revenue for itself. The remaining $5 would be split by publishers based on “the amount of time users spend engaged with their articles,” and Apple would not likely share subscriber data with the publications.

If this sounds like a case of double or triple deja vu, that’s because the same basic story has played out several times since 2010, when the iPad was first positioned as a potential savior for the declining news industry. Most recently, Bloomberg first reported in December that Apple was planning to keep Texture’s engagement time-based revenue split system, but told publishers that an increased number of subscribers would boost their revenues.

Prior to that, Apple spearheaded an iOS initiative called Newsstand that herded newspaper and magazine apps into a special folder, enabling them to sell recurring subscriptions — with a 30 percent cut to Apple. Despite some initial success, Newsstand collapsed as publishers continued to complain about everything from the revenue split and subscriber data-sharing practices to the limited visibility their apps had in the folder.

As objectionable as the new 50 percent revenue cut sounds on the surface, it’s even more problematic for news companies that have recently seen upticks in their own publications’ subscriptions. Enabling users to dodge each publication’s $10 to $39 monthly subscription in favor of one shared $10 fee could lead to mass defections from individual publications.

It’s unclear whether Apple’s tens of millions of readers — or more specifically, its smaller pool of paid subscribers — will actually spend enough time with a publication’s content to make this worth anyone’s time. Also uncertain is whether users will be freed from banner ads while viewing subscription content, since those ads might provide additional revenues to publishers.

For the time being, the New York Times, Washington Post, and Wall Street Journal have all reportedly declined to offer their content to the subscription service. But as has previously been the case, money talks, and if the revenue-sharing numbers and other terms are made more favorable, Apple might be able to get the heaviest hitters on board before the service launches. That’s expected to take place sometime around or shortly after March.