If the relationships between Apple, Google, and the governments they work with aren’t strained enough already, they’re about to get pushed even further. U.S. Senator Ron Wyden has formally asked the tech companies’ CEOs to immediately remove a Saudi Arabian government app called Absher from their app stores, citing media reports that the app is being used by Saudi men to monitor and control their wives and unmarried daughters.

Absher first became known outside Saudi Arabia earlier this month after an Insider report showed the system’s web interface enabling male “guardians” to register their female relatives’ travel activities. Though parents might reasonably use the system to monitor their kids’ travels, Absher’s text message alert system has been used to flag escape attempts by women and girls seeking asylum outside Saudi Arabia, enabling them to be apprehended before they leave the country.

While Absher includes a Saudi Arabian website, it’s also accessible in iOS and Android app form, which led activists to accuse the companies of helping to “enforce gender apartheid.” It’s those mobile apps that Wyden is specifically targeting in a letter to Apple CEO Tim Cook and Google CEO Sundar Pichai, which says that the companies are enabling Saudi men to use their phones to control their family members, which “flies in the face of the type of society you both claim to support and defend.” 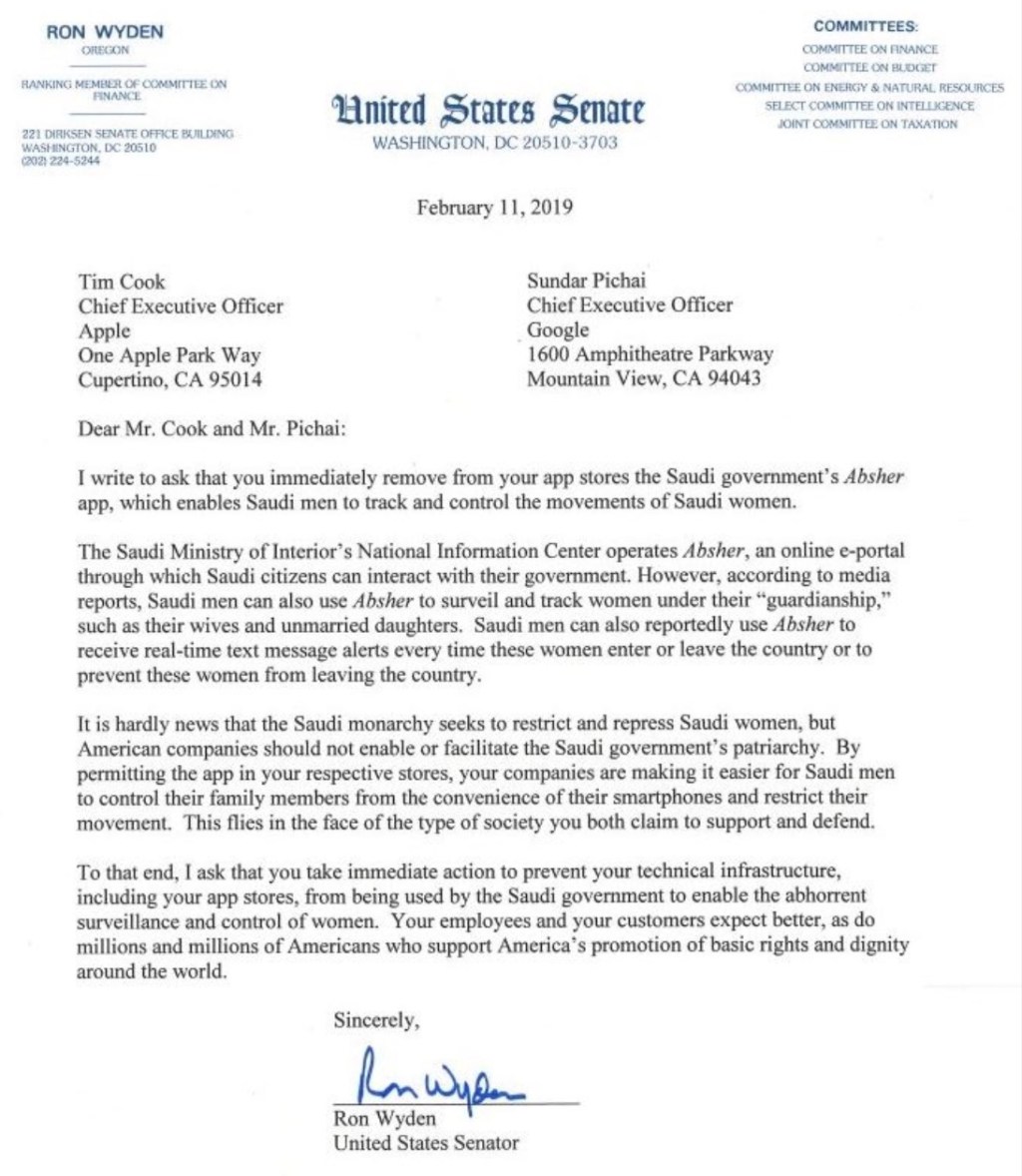 The situation might not seem so one-sided to Apple and Google. Absher is officially published by the Saudi Arabian government’s National Information Center, and has some legitimate purposes — not unlike U.S. Customs requirements that both parents provide authorization for their children to cross borders. It’s also not the only way that GPS-assisted location services on iOS and Android devices are tracking users, as Google obviously enables location sharing, and even privacy-focused Apple offers parents a “Find My Friends” app that can be used to pinpoint family members at any time.

Even so, the Saudi government has faced deservedly heavy criticism in recent months for the clandestine monitoring and slaying of journalist Jamal Khashoggi, which shed new light on the country’s authoritarian and sometimes dangerous practices. It seems unlikely that Apple or Google would opt to block the app based largely on a request from one U.S. official, but further human rights uproars outside and inside the companies might lead to a change.