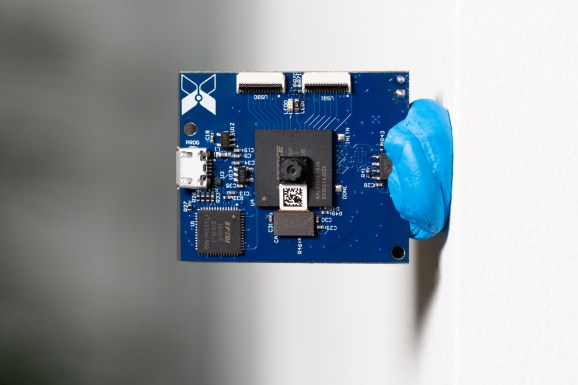 Edge computing company Xnor.ai today announced that it has made a device capable of deploying a state-of-the-art deep learning algorithm with a small solar panel — without requiring a battery or other power source.

Equipped with a camera mounted to a field programmable gate array (FPGA) board, the always-on device uses edge computing, which means photos or video data captured by the camera never leaves the device.

To alert a user when the algorithm detects or classifies a particular object, a low data rate wireless communication protocol can be used to send a text message.

The device introduced today can also be attached to a battery or other source of power, but a solar panel was used to demonstrate unique use cases that can emerge when an AI system produces reliable results and consumes 5mJ of energy for every inference instance.

Xnor.ai VP of strategy and operations Sophie Lebrecht told VentureBeat in an interview that she envisions applications for batteryless tech that’s always on for forest fire prevention or other outdoor applications, as well as wearable and internet of things (IoT) devices.

“What we were really trying to push on is ‘How do we get power so low that it’s actually scalable?’ So if you think about … the big bottleneck to really, truly adopting AI, it’s going to be power and sustainability,” Lebrecht said.

The device was rolled out today to demonstrate that AI “doesn’t have to just be run on a GPU in a server farm,” she explained.

“We can’t just throw the kitchen sink at an algorithm, just because you have a GPU, and [say] it’s fine [because] we’re building chips that can handle more,” she said.

Low-power or green solutions for edge applications of artificial intelligence represent an emerging field that — in addition to Xnor.ai — includes companies like AIStorm, which raised a $13.2 million funding round earlier this week.

In terms of datacenters, Top500, which tracks the fastest supercomputers on Earth, also tracks the most energy-efficient options with the Green500.