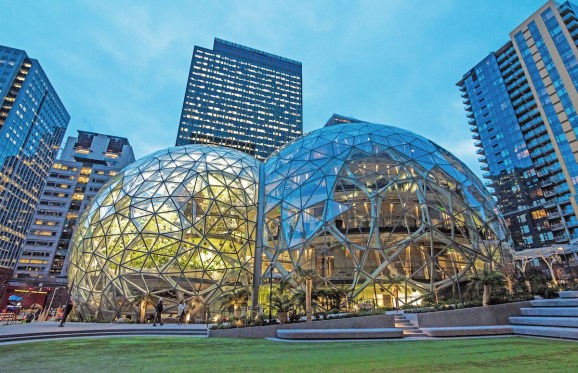 It took Amazon more than a year of behind-the-scenes negotiating to announce it would be building a big office in New York City. Then it took the ecommerce giant just three months to say “Actually, never mind.”

In case you missed it: This morning, Amazon announced it would no longer be building an office in the Long Island City neighborhood of Queens, New York. The office was announced at the tail end of Amazon’s much-publicized search for a second headquarters, dubbed HQ2. Amazon first announced in September 2017 that it intended to open an HQ2 for 50,000 employees somewhere in North America and that it was soliciting bids from cities to figure out where to put the office. Some 238 cities put their hat into the ring, but after a year of searching, Amazon announced in November that it was instead going to open two offices: one in Long Island City and one in Crystal City, Virginia, both of which would eventually house 25,000 workers.

Amazon said today that it is abandoning plans for the Long Island City campus due to opposition from state and local politicians. In recent weeks, state lawmakers appointed Senator Michael Gianaris to a board with the authority to cancel Amazon’s nearly $3 billion incentive package. However, Amazon said that in Brooklyn, Manhattan, and Staten Island it continues to expand teams that together consist of over 5,000 Amazon employees.

It’s unclear yet whether Amazon’s decision to pull out of New York will cause other cities to reconsider offering tech companies large incentive packages. The subsidy packages offered to Amazon by New York and Virginia have both met with criticism, as did a nearly $4 billion subsidy package the state of Wisconsin offered Foxconn in 2017. However, a recent survey found that the majority of U.S. mayors still think tax incentives are a good way to lure businesses, indicating that such packages aren’t going away anytime soon.

But in reflecting on Amazon’s year-long HQ2 search and speaking with experts who study economic incentive packages, one key theme emerges: Amazon did itself no favors in hosting a very publicized contest, albeit with lots of secretive, behind-the-scenes bidding and negotiations.

Tim Bartik, a senior economist at the W.E. Upjohn Institute for Employment Research, noted in a phone interview with VentureBeat today that the two states Amazon ended up choosing for its split HQ2 — New York and Virginia — offered very different incentive packages. Virginia’s lawmakers ended up approving a roughly $750 million incentive package, less than a third of the incentives New York proposed for the exact same number of jobs. New Yorkers were left wondering why their state felt compelled to offer Amazon a $3 billion incentive package.

“I wonder if that intensified the political backlash in New York,” Bartik told VentureBeat.

Stacy Mitchell, codirector for the Institute of Local Self-Reliance, told VentureBeat that one of the biggest takeaways from Amazon’s HQ2 stunt is that even after conducting a year-long search that was ostensibly open to any metropolitan area with more than 1 million people, the company still went with “obvious choices.” Both the Crystal City and Long Island City campuses would have been nestled in big metropolitan areas that have no problem adding jobs on their own and are already popular destinations for company expansions.

“What that tells us is what a lot of economic research has already found, which is the giveaways cities make to attract corporations ultimately have very little role in the decisions corporations make about where to go,” Mitchell told VentureBeat.

Indeed, if Amazon hadn’t launched a public search and had instead continued to expand its teams in New York City — as it appears to have been planning to do all along — the company could have avoided the PR headaches that will likely result from this bait and switch.

Furthermore, when it came time for the key architects of the $3 billion subsidy package — New York Governor Andrew Cuomo (D) and New York City Mayor Bill de Blasio (D) — to defend it, they found they didn’t have much support from one of the groups they needed most: state senators. That’s because these senators weren’t involved in the process of deciding what subsidies to offer Amazon, which was instead left up to Governor Cuomo, Mayor de Blasio, and the state and city’s economic development arms.

Before being appointed to the board with the authority to veto the incentive package, Senator Gianaris was already one of the loudest critics of the deal. He criticized the secrecy of negotiations in a recent interview with CNN Business and said that although he was initially in favor of Amazon coming to New York, he changed his mind after seeing how many tax breaks the state had put on the table.

Indeed, it was this backlash from local politicians, as well as criticism from Representative Alexandria Ocasio-Cortez (D-NY) and protests by local advocacy groups at city council meetings Amazon attended, that seemed the biggest factors in sinking the deal, Mitchell told VentureBeat.

Because New York City has a large concentration of union workers and Amazon has been criticized for being anti-union, many of these advocacy groups protesting Amazon were pro-union. That may explain why the Long Island City office has more publicly opposed the deal than the office in Crystal City.

Lastly, opposition groups were able to organize quickly because Amazon publicized its HQ2 search early on, giving critics of the deal more than a year to think about how they would react if the company came to their city. Case in point: One of the first anti-Amazon rallies was held in Long Island City just two days after the deal was announced.

Mark Muro, a senior fellow at the Brookings Institution, notes that “the pushback [Amazon] received in New York may be uniquely New Yorkish, but it does underscore the authentic ambivalence about these sites in all kinds of American cities.”

Mitchell also told VentureBeat that although other politicians and local advocacy groups might not be as willing to work together as they’ve proven to be in New York, “I think seeing New York take this kind of stand will galvanize other people … to not feel like they [have to] be railroaded by these [tech companies].”