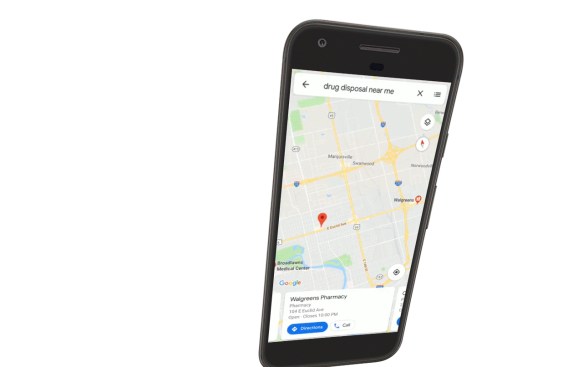 The initiative is an extension of a project Google announced last April to mark National Prescription Drug Take Back Day, when it created a locator tool to help people find places to get rid of their leftover prescription medications.

The National Take Back program occurs twice a year, while the ongoing opioid epidemic is obviously a year-round problem, which is why Google is expanding the program to make it a permanent feature inside Google Maps.

The opioid crisis, a term that refers to an increase in the use of opioid drugs across North America over the past couple of decades, was declared a public health emergency in 2017 by the U.S. Department of Health and Human Services (HHS). Between 1999 and 2017, more than 700,000 people died from a drug overdose in the U.S., more than half of which resulted from prescription and non-prescription opioids.

For extra context, deaths from opioids increased sixfold during that 18-year period, with 130 Americans now dying each day from an opioid overdose. One channel through which many addicts obtain their opioids is friends and family — either stealing their pills or asking to use their unused prescriptions. And that is why the HHS, U.S. Drug Enforcement Administration (DEA), state governments, CVS, Walgreens, and Google are looking to make it easier for those with excess opioids to drop them off safely at designated locations.

Moving forward, anyone Googling phrases such as “medication disposal near me” or similar questions will see the nearest places they can ditch their drugs, be it at a hospital, pharmacy, or government building.

To begin with, Google Maps will surface around 3,500 locations across seven states, though this is the start of a wider rollout.

For Google, this rollout represents the latest in a line of health-focused features that integrate tightly into its various products — Google Search has served up answers to medical questions directly in its search results for a while.

Elsewhere, a number of companies have been trying to find technological solutions to tackle the opioid crisis, from preventative, treatment, and overdose avoidance perspectives. Last year, for example, the state of Ohio helped fund a competition to find technology-based solutions that address the opioid epidemic.

Early evidence suggests that surfacing drop-off points for unused opioids through one of the most used mapping platforms could be effective. In 2018, the DEA collected 932 tons of unused prescription drugs across both National Take Back Days (April and October), which was roughly 25 tons more than the year previous. It’s difficult to conclude from that data how much impact Google Maps had specifically, because there were around 500 more collection sites available than in 2017. But the first place people often go to find any locations is Google Maps, so this can only be a good thing.